From time to time, InvestorPlace contributors are asked by the editorial staff to write about stocks they’ve recently recommended. On Jan. 31, I named Advanced Micro Devices (NASDAQ:AMD) one of seven S&P 500 stocks to buy that tore up earnings. I concluded by suggesting that if the company met its high-single-digit growth rate for 2019, AMD stock had a chance of hitting $40 by the end of the year. 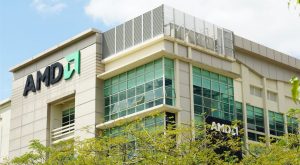 I still feel this way. Or at least I thought I did until I read the Feb. 5 news about the Abu Dhabi state fund’s proposed sale of almost 35 million shares of Advanced Micro Devices stock for approximately $840 million.

The headline from the news story in question: $225 Billion Abu Dhabi State Fund Dumps 35 Million Shares for Cash — Has the Chipmaker Hit a Market Top?

Suddenly, I was questioning my call. If a massive fund like the Abu Dhabi state fund is trimming its holdings in a stock it’s held for more than a decade (it once owned almost 13% of AMD ) it’s possible the above headline is right on the money.

After all, AMD stock generated nearly an 80% return in 2018, and that’s on top of a 295% return two years earlier. Over the past decade, AMD’s averaged an annualized total return of 25.5%. The chipmakers are known to be some of the most cyclical stocks you can own. It seems only logical that the state fund is opting to take profits.

As part of its proposed share sale, the state fund is exercising 75 million warrants it received in 2016 at $5.98 a share. AMD gets $448.5 million in cash, and the Abu Dhabi state fund retains almost 7% of the company while recycling $842 million of its capital and lowering its book value exposure to AMD stock.

There’s a saying that investors have many reasons for selling but only one reason for buying.

It appears that the Abu Dhabi state fund’s latest move fits into both camps. It’s selling to realize gains from its long-time investment in AMD; it’s buying to continue to benefit from CEO Linda Su’s excellent business strategy while lowering its financial exposure.

According to a 2017 filing, the state fund’s holding company, Mubadala Investment, the 75 million warrants it received in 2016 had an expiration date of February 29, 2020. It could have continued to hold the warrants unexercised for another year, but chose to exercise them early.

My only question is why?

If it thought AMD stock was going to continue to appreciate in 2019, why pay almost half a billion dollars today, when you can do it tomorrow?

That takes me back to the original headline wondering about a market top.

While it’s true that AMD’s Q1 2019 guidance called for weaker sales over the first half of the fiscal year, CEO Linda Su is confident it can deliver higher revenues in the year ahead, the best gross margins it’s seen in the past eight years, and take market share from its competitors.

“While headwinds remain in the graphics channel and macro uncertainties are causing some caution in the first half of 2019, we believe we are well positioned to gain share throughout the year and accelerate growth as we ramp our next generation 7 nanometer products,” Su said on the company’s Q4 2018 conference call.

I saw a quote the other day that’s applicable to this latest piece of news about Abu Dhabi’s state fund selling AMD stock.

For the life of me, I can’t remember who said it, but they were discussing how people suck up way too much information without spending time thinking about that information. What does it mean? Is it important? What should I do with the information? Etc.

So, in the case of AMD, you see the headline about a big institutional investor selling a large chunk of shares, and you jump to the conclusion that the sky is falling.

Take some time to understand what the share sale is about, and you’ll likely conclude that it is much ado about nothing.