It always looks inevitable in retrospect.

Why wouldn’t U.S. stocks rally, surging to the biggest weekly gain in a year, amid earnings euphoria like this? With no hint of fatigue, the S&P 500 Index spent the holiday-shortened week rolling past 2,700, while the Dow Jones Industrial Average jumped over 25,000. Ninety-eight companies in the Nasdaq 100 rose.

It happened as Wall Street stock analysts were jacking up profit forecasts. So fast that a measure tracking the frequency of upward earnings revisions to downward hit the highest level since 2011. The result was the best start to a year for the S&P 500 since 1999.

“This doesn’t mean the index will go straight up from here, but the economic fundamentals are strong enough to support the stocks,” said Phil Orlando, chief equity strategist at Federated Investors. “Corporate earnings growth has been solid in the last nine months, we expect another double-digits in the fourth quarter. The party is going to continue.”

Maybe it was easier than it looked to predict a blowout week for equities. Between the last week of December and the first week in January, the S&P 500 has reversed direction every year since 2011. A possible explanation is the expiration of government policies on Dec. 31. 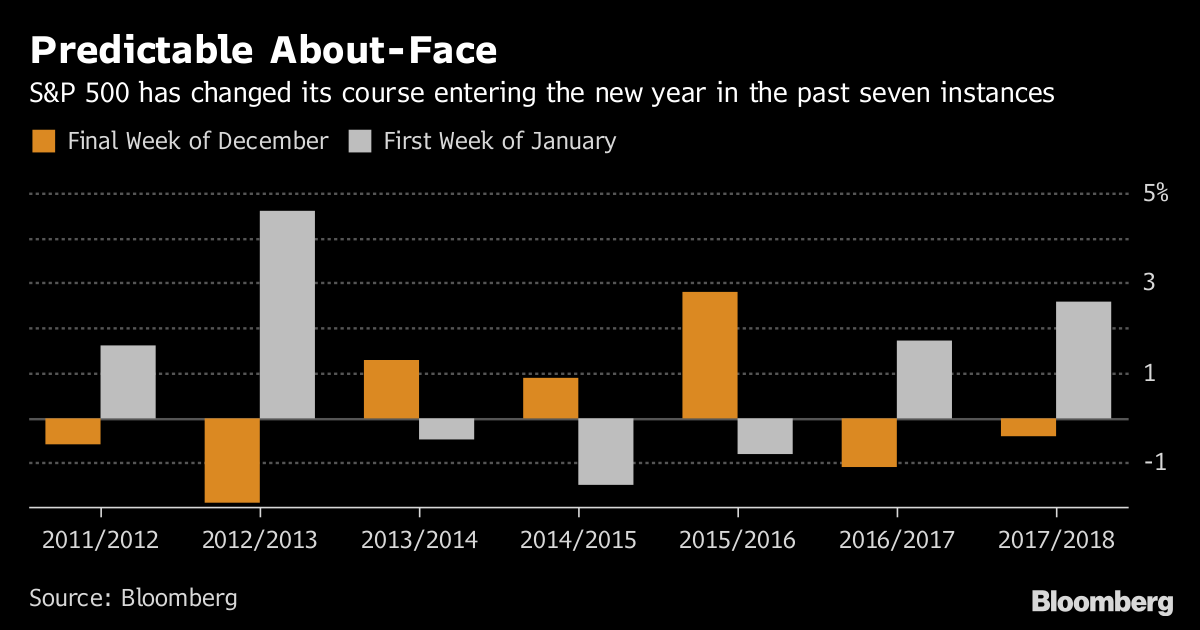 Sideways Christmas price action shifted to an upward slope for the S&P 500, which has been buoyed by Wall Street analysts boosting earnings forecasts and year-end estimates. UBS’s Keith Parker was one of them, raising his 2018 S&P year-end forecast to 3,150 and the index’s per-share earnings to $157 from $141 amid optimism that tax cuts and stock buybacks will support the rally. Among 17 strategists tracked by Bloomberg, the average estimate for the S&P at the year-end stands at 2,886, up about 5 percent from Friday’s close.

Companies in the S&P 500 will earn $148.3 a share in 2018, compared with $128.6 in 2017, according to Wall Street analysts tracked by Bloomberg. The implied 15 percent growth rate compares with a projection of 14 percent at this time last year and would represent the fastest increase since 2010.

“You’re seeing an unusual outpouring or earnings estimate revisions upward by Wall Street analysts. You could say, where were they all along?’,” said Marshall Front, chief investment officer at Front Barnett Associates. “You can’t really blame them. I’ve been telling people for years that there would be a five, 10, even 15 percent correction. I’m wrong all the time.”

Last year’s rally, the biggest since 2013, quieted equity bears who had voiced concerns the market, which hasn’t had a 5 percent drop in more than 16 months, is poised for a reversal. Corporate tax cuts, widely seen as a positive for the market this year, could be a headwind to growth in 2019, Savita Subramanian, a strategist at Bank of America Merill Lynch, said in a note this week.

For now, the fundamental backdrop for equities remains bullish. Globally, a synchronized economic expansion around major markets is driving appetites for riskier assets. In the U.S., the Federal Reserve’s repeated call for a gradual rate hike provides investors few surprises.

“It feels like the late phase of a bull market in which investors are capitulating on their reluctance, and joining the party because they cannot identify any downward catalysts,” said Matthew Litfin, portfolio manager of the Columbia Acorn Fund at Columbia Threadneedle Investments. “Instead, investors now see lower corporate taxes ahead, global economic growth accelerating, and valuation on ‘post-tax-reform earnings’ that is palatable.”