Shares of Walmart (WMT ) opened higher on Monday just a few trading days after the company reported solid first-quarter earnings results. With that said, Walmart’s stock price had sunk over the last few months, which means now might be a great time to consider buying the retail giant at a relatively cheap price.

Walmart’s overall revenues climbed roughly 4.4% from the year-ago period to hit $122.7 billion in the first quarter, with comp sales up 2.1%. Meanwhile, the company’s adjusted earnings surged by 14% to reach $1.14 per share, which also topped the Zacks Consensus Estimate of $1.12 per share.

Investors should also have been pleased to see that Walmart’s U.S. e-commerce sales popped by 33%, despite increased competition from Amazon (AMZN ) and other online sellers. Now, let’s take a look at Walmart’s price movement before we dive into why the company’s current valuation looks rather enticing.

Walmart stock was up roughly 8% over the last year before Monday’s gains. However, shares of Walmart had sunk 9.8% during the last 12 weeks and 4.8% over the last four weeks as investors reacted negatively to the company’s slower fourth-quarter e-commerce growth.

Still, investors need to know a little more before they can say that Walmart stock is currently offering a ton of value.

Coming into Monday, Walmart stock was trading at 16.9X forward 12-months earnings estimates. Walmart stock has traded as high as 23.8X over the past year, with its median resting at 17.9X. The company is also currently trading just slightly above its year-long low of 16.4X, which it rested at briefly in early July of last year. 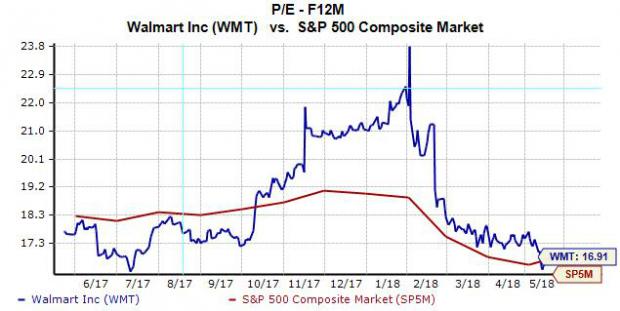 Based on the last year alone, investors should be able to say with some conviction that Walmart stock is rather attractive at its current valuation, and pretty cheap compared to where it has traded recently.

Lastly, it is worth considering Walmart’s current growth prospects. The company is projected to see its second-quarter earnings climb by 12.9% to touch $1.22 per share, based on our current Zacks Consensus Estimates. For the full-year, Walmart is expected to hit $4.86 per share, which would mark a nearly 10% surge from a year ago.

Meanwhile, Walmart’s revenues are only projected to pop by 1.8% in Q2, while full-year revenues are projected to climb by 2.08% to reach $510.74 billion. Investors might be a bit less pleased to see these top-line projections, but it is worth considering just how hard it is to post massive top-line growth when the company is expected to pull in over $510 billion.

Our 2% full-year growth estimate would mean Walmart expanded its top line by $10 billion.

Looking for Stocks with Skyrocketing Upside?

Zacks has just released a Special Report on the booming investment opportunities of legal marijuana.

Ignited by new referendums and legislation, this industry is expected to blast from an already robust $6.7 billion to $20.2 billion in 2021. Early investors stand to make a killing, but you have to be ready to act and know just where to look.