One of the most famous passages in American literature occurs in Chapter 13 of Ernest Hemingways The Sun Also Rises. It takes place in a caf茅 in Pamplona, Spain during the running of the bulls.

Bill Gorton, a friend of the protagonist, Jake Barnes, has just arrived from New York. Bill is in the caf茅 talking with Mike Campbell, an upper-crust Englishman, now fallen on hard times but keeping up appearances.

In the course of telling a story about his tailor, Mike casually mentions his bankruptcy. Heres the dialogue:

How did you go bankrupt? Bill asked.

What brought it on?

Friends, said Mike. I had a lot of friends. False friends. Then I had creditors, too. Probably had more creditors than anybody in England.

Mike admits to his own helplessness; his descent into bankruptcy was apparently totally beyond his control. This reflects upon his lack of control with regards not only to his business matters, but to his life in general.


Youve probably seen variations of the part of the passage that says, Gradually and then suddenly. Its often paraphrased or misquoted as, slowly at first, and then quickly.

The short version of the quote is offered as a warning that a slow, steady accumulation of debt with no particular plan for repayment can continue longer than expected, and then suddenly descend into a full-blown financial distress scenario and a rapid end-state of collapse. 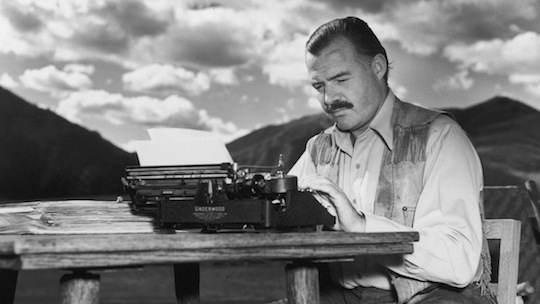 Ernest Hemingway was not only a Nobel-Prize winning author, but was an astute observer of human nature and a fine armchair economist. His description of going bankrupt in Chapter 13 of The Sun Also Rises is a pitch-perfect narrative of how the United States is now barreling toward a crisis of confidence in the dollar.

I selected the longer version to give the short quote some context. The debtor, Mike, didnt just go bankrupt. He had a lot of friends who relied on him for his generosity and support, with no willingness to pay him back or help him in distress.


He also had a general lack of control with regard to his financial situation. Most debtors can see problems coming and either cut back spending or take other steps to deal with the debt. Either course will bring the situation to a head sooner than later.

Its the lack of control that allows the debtor to reach the point of non-sustainable debt, the gradually part, and then have a crisis thrust on him all at once, the suddenly part. This is how the inevitable becomes a surprise.

Sound familiar? It should. This is exactly the situation in which the U.S. now finds itself. The U.S. national debt has been accumulating slowly for decades. There is no plan to make it sustainable; just a vague wish that the creditors will keep expanding the debt or rolling it over.


The U.S. has a lot of friends, both at home and abroad, who expect benefits whether in the form of entitlements, foreign aid, government contracts, or tax breaks. Clearly the U.S. Congress and White House each exhibit a complete lack of control. The caf茅 scene is complete.

The question is whether the U.S. is now at the point of suddenly going bankrupt. Of course, the U.S. wont actually go bankrupt. It can print all the money it needs to pay off its debts in nominal terms. The issue then is a matter of when that kind of money printing becomes necessary, and under what conditions.


The dynamic of gradually, and then suddenly is well-known to physicists and applied mathematicians. In physics, it is known as a phase transition. A good example is a pot of water being boiled and then turning to steam. The flame can be applied to the pot for quite a while and absolutely nothing happens to the naked eye. Of course, the temperature is rising, but hot water looks just like cold water.

Suddenly the surface of the water becomes turbulent and quickly after that the bubbly surface bursts into steam. The water has been transformed. If nothing is done, the entire pot will evaporate.


In mathematics, the same dynamics are known as hypersynchronicity. Thats a fancy word for a lot of people suddenly all doing the same thing at the same time. A run on the bank is a perfect example.

A bank run begins with just a few people demanding cash at the teller counter (or doing the digital equivalent by withdrawing deposits or cashing out of money market funds). Soon word spreads, people panic, everyone wants their money back at once, and theres not enough money to meet the demand for liquidity.

This is exactly what happened in September of 2008 following the bankruptcy of Lehman Brothers. That crisis had been on a slow boil since August 2007, then suddenly in September 2008 the whole world wanted its money back.


Ive been a fan of Hemingway for decades, and have read almost every word he ever published including letters and incomplete manuscripts, as well as a number of well-researched biographies.

Ive seen no evidence that he took much interest in physics or mathematics. Yet, theres ample evidence that not only was Hemingway a close observer of human nature, thats obvious from his writings, but he was also an excellent armchair economist.

Hemingway learned an enormous amount about foreign exchange, inflation and national insolvency as an expatriate reporter living and traveling in Europe in the 1920s. He saw the French hyperinflation of 1925 firsthand.


As an American with a dollar income, he could live in a decent apartment and afford the best wines in the best cafes because the French franc had drastically devalued. His dollars were a natural hedge against franc devaluation. The French themselves had to suffer the consequences of the hyperinflation because they were paid in francs not dollars.

What if the dollar suddenly became as unwanted as the French franc in 1925?

Consider the evidence that the U.S. may now be dangerously close to the suddenly stage of Hemingways bankruptcy scenario after years in the gradually stage:


Congress has enacted the Trump tax cut, which blows a $1.5 trillion hole in the budget deficit. The belief that tax cuts will stimulate enough growth to pay for themselves is a sheer fantasy shared by Larry Kudlow, Art Laffer, and very few others.

Congress has also removed discretionary spending caps on domestic and defense spending that have been in place since 2011. At the same time, Congress reinstated earmarks that allow members to spend money on pet projects. These two acts will add another $300 billion per year to the U.S. deficit.

Student loan defaults are now running at 20% per year and the volume of student loans exceeds $1.5 trillion, far more than the amount of junk mortgages in 2007, and with a much higher default rate. Covering these losses will add another $200 billion per year to federal deficits for years to come.


The U.S. debt-to-GDP ratio is now over 105%. This is well past the 90% danger zone identified by economists Ken Rogoff and Carmen Reinhart. Once in the danger zone further borrowing actually causes growth to decline rather than acting as a stimulus.

Russia, China, Iran, Turkey and other adversaries of the U.S. are stockpiling thousands of tons of gold as a hedge against the inflation they expect as the U.S. tries to print its way out of its non-sustainable debt.

There are many other signs that the day of reckoning on the U.S. debt situation is coming much faster than experts believe. Fiscal policy is now characterized by a complete lack of control as Hemingway characterized it.

Hemingways point was that bankruptcy comes much faster than anyone, especially the bankrupted himself, expects.

The U.S. is much closer to an inflection point than the Congress and the White House realize. The pot is beginning to boil. The time to hedge against the worst outcomes with gold, silver, land, natural resource plays, and other hard assets is now.

Jim Rickards
for The Daily Reckoning