Long-term Baidu (NASDAQ:BIDU) shareholders have enjoyed stellar performance from the stock; its shares are up more than 1,200% over the last decade. However, its run over the last several years has been characterized by volatility. The Chinese search engine and online advertising leader saw its stock price hit a lifetime high in 2018, but a slowdown for China’s economy and concerns that its stock market had become overheated prompted steep sell-offs in the year’s latter half.

Baidu stock is off roughly 40% from its high and now trades at roughly 16.5 times this year’s expected earnings — a multiple that looks enticing in comparison to recent historical context and the company’s ample growth potential. The Chinese tech stock’s risk profile won’t be a great fit for every investor, but for those who are intrigued by the long-term growth potential in the country and aren’t put off by volatility, there’s a compelling case for buying Baidu.

Baidu has often been referred to as the “Google of China,” and like the American search giant, it commands a dominant position in the search space and makes money by serving up targeted, keyword-based advertising. China’s digital-ad market grew more than 25% in 2018, and Baidu claimed roughly a 70% share of the search market that’s at the center of online advertising.

The company is looking to cloud and artificial intelligence services to power its next big growth leaps, in part because the strong ecosystems of companies like Tencent Holdings present a long-term threat, but the search business still looks solid. It would be unwise to completely write off competition considering existing competitors like the Tencent-partnered Sogou are offering alternatives and the possibility that Google will re-enter the Chinese market, but Baidu’s position continues to look strong.

Baidu built its lead in the space by delivering a superior user experience, and the nature of the search algorithms and artificial intelligence systems at the core of its engine mean that these advantages tend to become self-reinforcing. The more data is pumped through Baidu’s channels, the more its algorithms are refined and its performance improves — and the harder it becomes for rival offerings to catch up. In that way, many of the same dynamics that have helped Google dominate in America and Europe continue to work in Baidu’s favor in the Chinese market.

In addition to its core search business, the company is branching out into cloud services and has positioned itself as an early leader in the artificial intelligence space. The company counted 141 million users for its DuerOS voice operating system at the end of September, up from 100 million users early in August, and its favorable position in search and voice-based operating systems makes the company a likely candidate to benefit from the rise of Internet of Things (IoT) technologies in the country.

Concepts like artificial intelligence and IoT can sometimes come across a bit nebulous and futuristic, but Baidu is making real progress with initiatives in those fields. These businesses stand to see substantial growth over the next decade and tap into the type of wide-sweeping, hugely influential trends that should be of interest to growth-focused tech investors.

The company’s Apollo autonomous driving operating system is already being used to test self-driving taxis and other connected-road solutions in the country’s Changsha municipality, and it’s working on a range of AI and smart-city initiatives with a very important partner.

Investors are right to home in on the role that the Chinese government will continue to play in shaping the country’s online content and technology industries. The headaches created by medical advertising scandals and moves made by regulators have not been forgotten by Baidu shareholders. The company also owns a roughly 60% stake in iQiyi — a video-streaming company that it spun off last March that has to contend with the country’s content regulation policies.

However, there’s another side to the government dynamic — a positive one that may be underappreciated by the market.

Baidu is partnered with the Chinese government on smart-city and autonomous-vehicle projects that could turn into real performance drivers. Its Apollo smart-car platform has been adopted as the official operating system of the country’s self-driving vehicle projects, positioning Baidu to play an influential role in shaping the country’s IoT and autonomous-driving markets. China has an interest in building up its AI and smart-city technologies, and the fact that it’s made Baidu one of its key corporate partners on these initiatives bodes well for the company.

While its share price fell steeply in the second half of 2018, Baidu’s earnings performance over the last year was generally encouraging thanks to good results from the core advertising business and fast growth for emerging product categories. The third quarter saw the company’s sales increase 27% year over year and earnings rise 47% compared to the prior-year period. Overall, online advertising services grew at roughly 18% last quarter, while sales for its other-businesses revenue grew 69%.

Growth for the core business is moderating but still healthy, and its younger businesses are pulling their weight. The average analyst estimate as compiled by Reuters projects that the company will increase earnings at an annual rate of roughly 18% over the next five years. That’s attractive growth given that the company trades at decade-low earnings multiples and has avenues to surpassing that expansion target if its search strength holds and payoff from its investments in AI and cloud accelerates. 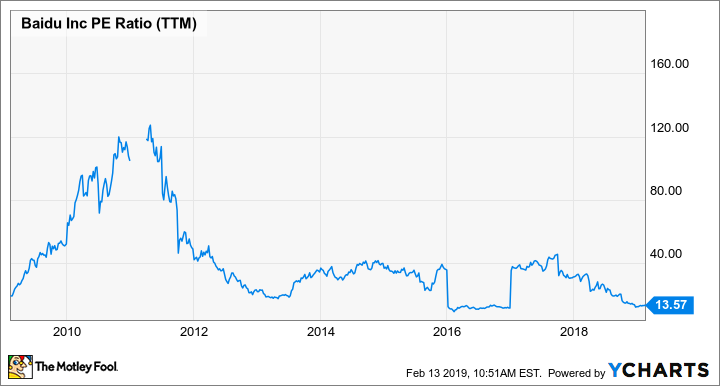 The company’s growth is cheaply priced. Earnings momentum has moderated, but the company’s trailing price-to-earnings growth ratio sits at just 0.2, and its forward ratio sits at roughly 0.5, suggesting that investors are still getting a deal on the stock.

The Chinese tech sector can present more risk and volatility than many investors will be comfortable with, and there are good reasons to be concerned about economic slowdown and unpredictable moves by government regulators — in addition to the usual competitive pressures inherent to fast-shifting, innovation-focused industries. For investors who are OK with taking on that profile in pursuit of big returns, Baidu stock’s risk-to-reward proposition is worth taking.