Even as the recent protests in the country have died down thanks to the deployment of Tehran’s national guard, the lingering threat of an uprising remains, largely due to the dismal state of the nation’s economy. 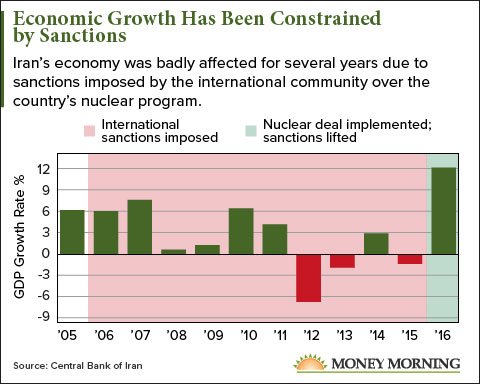 In 2016, after the deal was implemented, and most of the aggressive sanctions on Iran were lifted, the economy surged back, and the nation’s GDP grew 12.3%, according to the Central Bank of Iran. Much of that growth was attributed to the oil and gas industry.

Then, on Dec. 18, 2017, the International Monetary Fund (IMF) said growth had begun to spread to the non-oil sector in Iran, which meant the economic boon was spreading to other industries in the country. It predicted that Iran’s GDP would expand by another 4.2% in the 2017/18 fiscal year.


Learn How to Turn $500 into $1 Million: This Sunday school teacher’s “retirement career” made him a millionaire. This book will teach you how you can do it too. Claim your FREE copy…

However, despite this momentous growth, the people of Iran are not finding the recovery as significant as they’d hoped.


And while inflation has dropped since Rouhani’s election in 2015, it’s still at 11% – an unaffordable sum for the many Iranians out of work.

Analysts point to the fact that U.S. sanctions on financial transactions with Iran have remained in place, which has deterred foreign companies from doing business there. Add U.S. President Donald Trump’s Oct. 13, 2017, refusal to recertify the nuclear deal to the mix, and you’ll see how Iran’s current situation leaves the fate and wellbeing of its people in limbo.

The protests have garnered a knee-jerk reaction in the oil markets. WTI (West Texas Intermediate, the benchmark crude rate for futures contracts cut in New York) was up nearly 3% in just the first three trading days of 2018.


And if there’s any sign that these demonstrations might instigate strikes in the nation’s oil fields, oil prices will really take off.

Iran Is About to Take Several Hits from the Outside World

Tehran’s ongoing battle with the Saudis poses another threat to the country’s stability.

Saudi Arabia and Iran have long been at loggerheads with one another – especially in their ongoing proxy war in Yemen.


So far, however, “most of the political risk has been smaller-scale,” Michael Lynch, president of Strategic Energy & Economic Research, told Bloomberg on Nov. 10. “But when you start talking Saudi Arabia and Iran, that gets people’s animal spirits flowing.”

That very week last fall saw hedge funds and other money managers increasing their bullish bets on crude oil because of the ongoing Saudi Arabia-Iran tensions.

However, the most critical event on Iran’s horizon won’t merely spark short-term increases in the oil price. Rather, this event could send American oil companies downward in the long term.