Investors expecting the stock market to build on the robust start it’s seen in 2019 don’t have history on their side.

A lot will have to go right to continue the best market start in 32 years. After all, the year-to-date gain, which eclipsed 10 percent for the S&P 500 during Friday’s rally, is already better than what the index typically sees over an entire year. 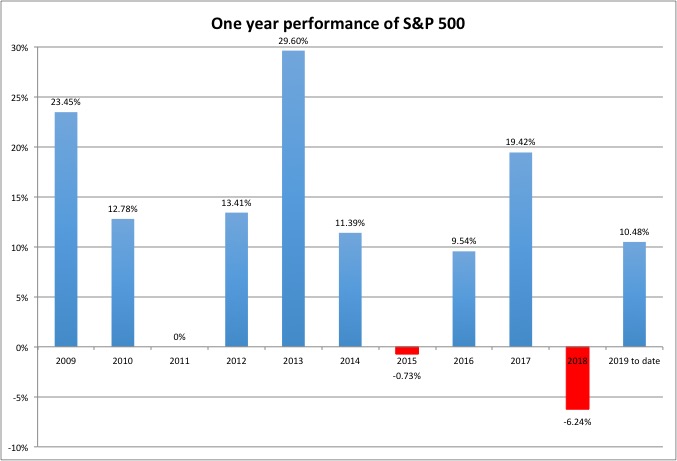 But someone looking to jump into the market now and expecting to make money by the time the calendar rolls over 2020 will need the following stars to align: positive U.S.-China trade talks, continued reluctance by the Federal Reserve to raise interest rates, and the economy and corporate profits to stay out of recession, just to name three.

The market was in a funk during the fourth quarter of 2018 that began with Fed fears and ended with a blowout selling frenzy that resulted in the worst Christmas Eve in Wall Street history.

Difficult as it was to endure, the late-2018 slide and the early 2019 rally may portend good things for investors the rest of the year.

“The quickness by which you’ve come out of the gate is uncommon. But January’s irregularity is just as irregular as what we had in December,” said Jim Paulsen, chief investment strategist at the Leuthold Group. “I don’t remember another December in my 36 [professional] years that was like that, ever. It was weird and odd and January is equally so, and I think they’re not unrelated in some sense.”

Some of the factors that Paulsen sees contributing to a constructive outlook include monetary and fiscal stimulus, more reasonable stock valuations and low inflation, particularly at the gas pump.

“I don’t think it’s going to keep up the pace it’s going. I wouldn’t be surprised at a healthy pullback that scares people again,” he said of the broader market. “But I just think the fundamentals are there, with a better market valuation, much more competitive yields, much more fiscal and monetary support, and a gut-check in sentiment.”

The obstacles remain, though.

For one, corporate America could be heading into its first negative earnings quarter since the second quarter of 2016. Multiple expansion, which helped propel most of the bull market run, is likely over, meaning companies are going to have to start growing revenue.

Investors will be hoping that a stronger economy can help make up for earnings weakness.

Here's why the legendary Charlie Munger thinks investing is harder than it used to be    7 Hours Ago | 03:10

“Although the peak earnings growth rate for this economic expansion is almost certainly behind us, profit growth peaks have historically been followed by several years of economic growth and stock market gains,” John Lynch, chief investment strategist at LPL Financial, said in a note. “We believe the earnings outlook is strong enough to support solid gains for stocks over the balance of 2019” and the firm is sticking to its 3,000 price target for the S&P 500, implying 9.3 percent upside from Thursday’s close. The median price target on Wall Street this year is 2,950, or about 7.5 percent higher.

Lindsey Bell, investment strategist at CFRA, thinks the markets and earnings picture will need a boost from geopolitics, namely a positive resolution to the U.S.-China trade talks.

But Paulsen cautioned about the implications of the tariff talks.

President Donald Trump has been pushing for a reduction in the U.S. trade deficit, which was $49.3 billion in October. But Paulsen said reductions in imports have traditionally come with a weakening economy and a down stock market.

That highlights just one of the obstacles for investors late to the market rally.

“If you’ve been in cash and you want to throw it all in, I certainly wouldn’t do that,” Paulsen said. “But I think it’s OK to be overtilted to the positive side.”