My previous article Intrexon – The Opportunity Of A Lifetime – The Healthcare Assets And Pipeline explored the healthcare pipeline of Intrexon.

This article will explore and explain Intrexon’s (XON) energy assets or “Methane Bioconversion Platform,” which turns low cost natural gas into high-value fuels and chemical products using a type of bacteria called methanotrophs which have been genetically modified.

Intrexon has frequently showcased this platform to investors and the public using images like the one below from the February 28, 2019 earnings call.

Before I examine the total addressable market, economics, and progress of Intrexon’s energy program I will try to explain it in the simplest way possible and provide a similar scenario to help readers better understand the potential of this technology.

For an illustrative example, let’s say a company was able to genetically modify a bacteria to eat low value metals (such as copper or iron) and poop out higher value metals such as gold, platinum, or silver. As an investor, you would immediately see the immense value of this proposition (should the company be able to do this consistently and at meaningful scale). 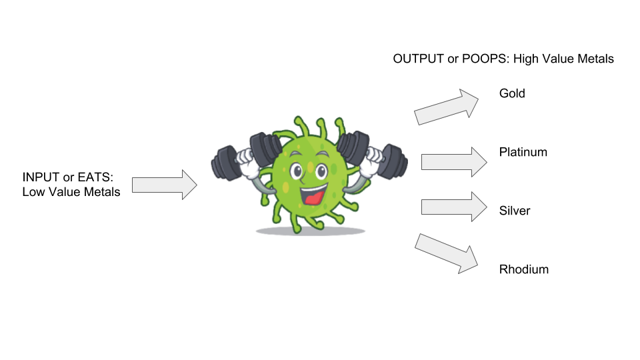 You as an investor would also likely want to examine the economics of this high-value pooping bacteria platform. Should the economics show that this process was far cheaper and had higher margins than traditional land surveying, mining, and processing of precious metals, you might think that this disruptive technology would be worth at least 10’s if not 100’s of billions of dollars. 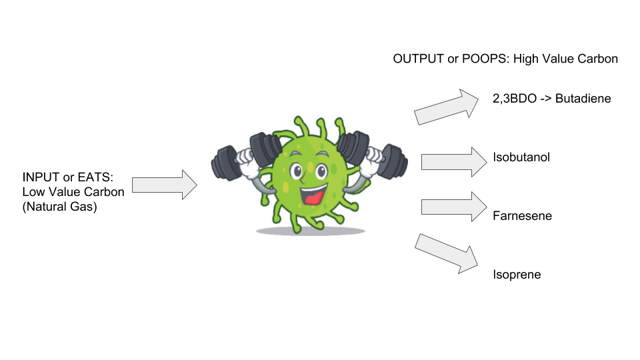 Intrexon has genetically modified bacteria to eat a low value carbon input (in natural gas) and poop out higher value chemicals such as 2,3 BDO, Isobutonol, Farnesene and Isoprene among others.

Now that we understand what Intrexon’s Methane Bioconversion Platform is, let’s look at some of the progress that the company has made on this front and some of the products yields that are attainable with this approach in comparison to traditional bio-fuel approaches which break down sugar or high-cost carbon.

In 2016, Bob Walsh, head of Intrexon’s energy division said in an interview:

“Our platform also generates twice the yield as compared to other bio-based approaches. Because of this, we can generate gross margins well above the industry averages, and our product is profitable without subsidies due to lower-cost feedstock and higher yields.”

In a corporate presentation at the J.P. Morgan Healthcare Conference on January 10, 2018 the company shared the following illustration of the yield potential based on the same weight of natural gas vs sugar, as well as the significant price difference of the two different inputs.

Compared to traditional biofuel conversion methods both the cost of the input (Natural Gas vs. Sugar) and the total yield potential is superior for Intrexon’s energy platform.

The contentious point here is that the market size for Isobutonal is currently limited to about ~$80 Billion USD/year due to regulations in the industry which slightly changes the total current addressable market size.

Below I have shown some of the key markets for the chemicals that Intrexon is pursuing.

SBR and PBR are used to produce tires and plastic materials.

Styrene-butadiene latex is used to produce carpet and paper coatings

Neoprene is used in gloves, wetsuits, waders and foams

Nitrile rubber is used in hoses, gloves, gaskets and seals.

Butadiene is also used in the manufacture of adiponitrile, a precursor for nylon-6, 6, which is used to produce carpets, textiles and plastic parts.

feedstock in the manufacture of isobutyl acetate, which is used in the production of lacquer and similar coatings, and in the food industry as a flavoring agent

precursor of derivative esters – isobutyl esters such as diisobutyl phthalate (DIBP) are used as plasticizers in plastics, rubbers, and other dispersions

precursor of p-xylene, a building block for plastic bottles, textiles and clothing.

Transportation fuels such as diesel and jet fuel

I hope at this point in the article you have a clear (yet simple) understanding of Intrexon’s Methane Bioconversion Platform and the products it produces.

The challenge many investors have had putting an adequate valuation on this technology is Intrexon’s reporting around yield, return on investment, and program progress. 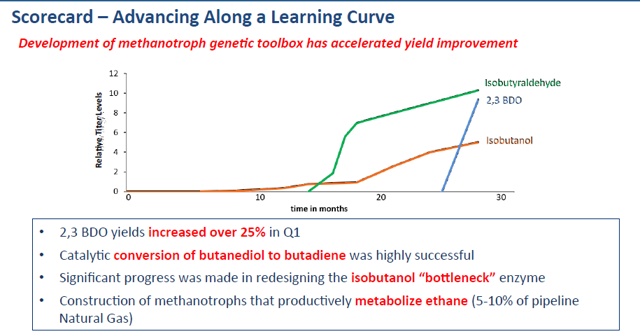 It states that in Q1 2,3 BDO yields increased over 25%. In Intrexon Q4 results slide it mentions that the production of BDO has reached 50% of final target yield (which is not disclosed). 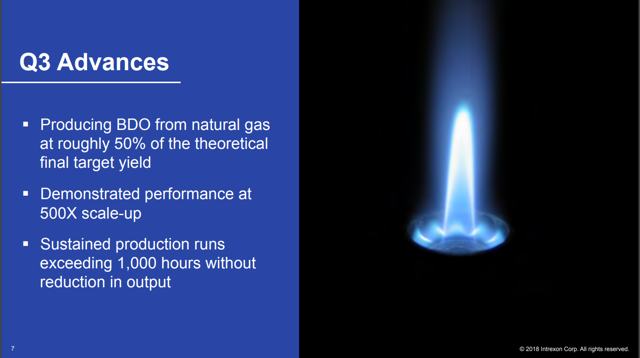 In the Q4 results conference call management stated that there was a 50% increase in 2,3 BDO yield over 2018 and that they are now at 80% of their target goal to justify construction of a plant.

The release of numbers in this fashion has confused many investors were the gains as I have demonstrated how these numbers could be true in a variety of applications.

In each of these scenarios Intrexon’s management would not be lying about their yield increases or target plant goal scenario. However, Intrexon has failed to communicate via some sort of standard around how progress is going for the program as a whole. This leaves some investors uneasy around what language such as “theoretical final goal” or “target plant goal” means.

Further adding to the confusion is the dialogue shared by Intrexon senior management around the return on investment of the first pilot facility.

“For this first facility we can share the following, the capital expenditure for 40,000 tons per year 2,3 butanediol capacity further converted to 26,000 tons of butadiene is estimated at $75 million on a Greenfield basis.

Construction time is 12 to 15 months depending on weather and trade availability and a July butadiene contract price at 1,400 per ton we’re projecting a gross operating margin of almost $1,000 per ton over $25 million of EBITDA. For modeling purposes a large scale facility would produce 100,000 tons per year of butadiene and we expect capital costs to increase proportionally but to the 0.65 power.”

So on a greenfield basis (meaning no existing infrastructure exists) the return on investment for the pilot plant would be in 3 years of EBITDA ($25 million x3) vs a capital expenditure of $75 million, which are very favorable economics for capital investment.

The problem with this scenario is that it is unrealistic, Intrexon would not be building a pilot plant on a greenfield basis, they would be building with a partner that has significant infrastructure in place, which makes the economics of this even more favorable as the return on capital would occur in much less than 3 years.

The return on investment is extremely attractive for both the small and large scale facilities on a “brownfield” or existing infrastructure basis.

What is even more exciting about the opportunity is that a larger scale plant would cost only 66% percent of the pilot plant and the economics look even more favorable. The capital costs would theoretically be returned in less than one year with the larger scale plant.

On Q4 results call on February 28, 2019 the company shared the following slide showing the economic superiority of their current platform to what is available in the market. In this modeling what caught investors off guard was that Intrexon had included a ~$800/ton subsidy to their calculation without clear explanation as to why this was included. 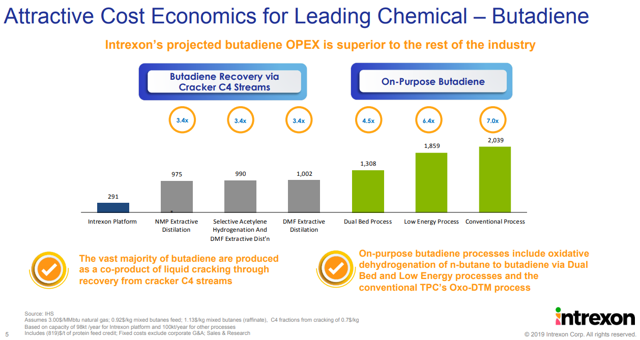 The answer is quite simple, the “used up” bacteria can be sold as animal feed. I have included an article titled “Methane-based animal feed is more than just hot air” for your reading pleasure. 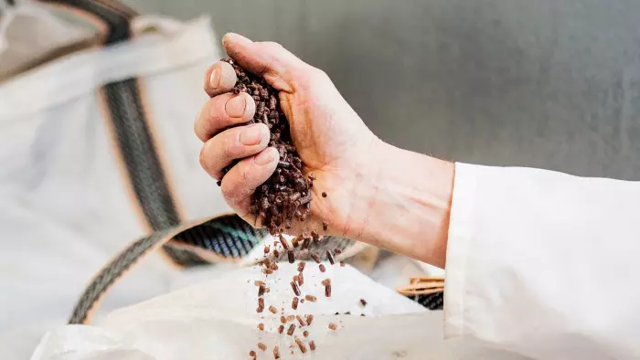 The short story is that Intrexon is not only able to produce Butadiene at industry leading prices, these prices are driven down immensely because the waste generated by the process is valuable as animal feed. 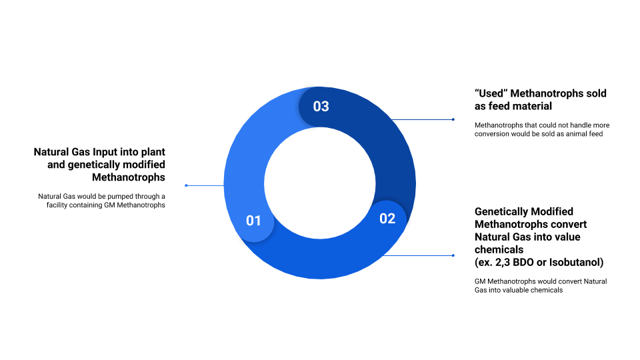 The graphic I created above helps to understand how the process works at a high level which will allow Intrexon to have the most favorable cost model in this $22+ Billion per year market by almost 3-5x better than the nearest competitor. This overly simplified diagram again shows another missed opportunity for the company to have told its story.

Finally, I will discuss the partnering opportunities available to Intrexon and assign a nominal value to each.

Partner with a company for a single plant

Partner with a company for a single chemical output

Before I present my high level valuation on each of these deals I want to showcase two quotes from Intrexon’s CEO. Intrexon also stated on February 19,2019 that the gross margin for each of the chemicals achieved through this process would be greater than 50% at $3 natural gas and $50 crude oil prices.

I think we have publicly said that the ideal relationship for us would be a 50-50 joint venture across the entire platform. While that’s not necessarily the only outcome, because we do have interest in individual molecules as well. That’s still our favorite, our favorite scenario.

A success of that type, Bob told you the latest numbers on 2,3 BDO. In my opinion, that product alone is worth more than the market capitalization of Intrexon. (at which point was near $2 billion USD).

As you can see, if Intrexon is able to prove out and partner a single molecule or the full bioconversion platform with a leading oil & gas company the result would multiply Intrexon’s current market cap.

At the economics and total market opportunity that is present, I would be surprised if large players in the space such as Saudi Aramco, Sinopec, Royal Dutch Shell (RDS.A) (NYSE:RDS.B), Exxon Mobil, BP (BP), Chevron (CVX), Phillips 66 (PSX), or Kuwait Petroleum Corporation were not doing their due diligence on the technology as the companies are looking to increase revenue in environmentally sustainable ways.

Intrexon’s Methane Bioconversion Platform may be one of the most valuable assets in oil and gas if they are able to prove it out on a commercial scale.

Intrexon needs to do better in communication yields, return on investment, and progress on this platform in a more simple and transparent manner.

It may be worthwhile for Intrexon, to do a phased partnership approach where they continue to build out the proof around the technology at scale than immediately trying to go for the full 50/50 joint venture which might require a level of investment that some companies feel is too risky.

Like Intrexon’s health assets, the energy division alone is worth more than the current market cap of the company.

Disclosure: I am/we are long XON. I wrote this article myself, and it expresses my own opinions. I am not receiving compensation for it (other than from Seeking Alpha). I have no business relationship with any company whose stock is mentioned in this article.