Suddenly, after a decade of underperformance, Intel Corporation (NASDAQ:INTC) is hot again. INTC stock is up almost 26% over the last three months, and just blew out earnings and bumped up fourth-quarter guidance. The three-month gain in Intel shares edged out the advance by NVIDIA Corporation (NASDAQ:NVDA), the darling of Wall Street, which is up 23% in that time. 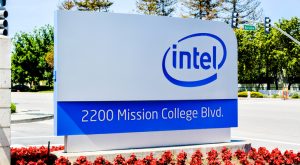 Best of all, even after earnings beat, the it’s not too late to get in on this. At its $44.40 opening price going into the last few trading days of October, it’s still selling for a below-market price-to-earnings ratio of about 15.6. NVDA, by contrast, trades at 57.8 times earnings. Certainly, there’s some interpretation of Moore’s Law to be applied here.

The key to the beat is sustainable, a 7% gain in data center revenues, which should in time strengthen its cloud business, where customers have a keen eye on controlling costs.

Regular readers of InvestorPlace know all about this, because our writers have been pounding the table about Intel this month.

Chris Fraley saw Intel gaining steam in mid-October. Shortly after that, Luke Lango called it the cheapest way to play the artificial intelligence (AI) revolution.Vince Martin called it a big buy ahead of earnings while Ian Bezek predicted it would soon hit $50 per share.

Key to the calls are the cloud upgrade cycle, and new markets like self-driving cars and voice interfaces, such as Siri from Apple Inc. (NASDAQ:AAPL), Cortana from Microsoft Corporation (NASDAQ:MSFT), Google Home from Alphabet Inc (NASDAQ:GOOGL) and Amazon.com Inc.’s (NASDAQ:AMZN) Alexa, which increase the processing load on both client and cloud.

These markets are booming ahead of demand, even before the software to implement the revolution is ready. That means boom times for chipmakers, and Intel, with almost $60 billion in sales in 2016 and expecting more in 2017, and with over a quarter of that coming to the net income line, is a logical beneficiary.

The problem until now is that analysts feared Intel was going to miss the market, as it missed mobile in the last decade. But the new boom plays into its strength, the fact that alone among major U.S. chip companies it owns chip fabrication plants, and that it has the financial strength to buy design software it lacks, as with its purchase this year of Mobileye.

The cloud czars have the size to do their own design work, and are also focused mainly on price-performance and large deliveries, not just raw speed. While some of the cloud companies, like Google, are now designing their own AI chips, Intel is still going to be the manufacturer of choice.

Even at its current level, Intel is well off the highs it achieved during the dot-com boom, when the stock split repeatedly and peaked at nearly $74 per share, 43% above its present price. An earlier peak in the shares of about $37 per share, achieved late in 2014, turned out to be a false dawn, and the shares only crossed $40 in the last week.

Until this month, in short, Intel has spent the 21st century as a dividend stock, and even at its current level yields 2.45%, almost as much as a U.S. 30-year bond.

The Bottom Line on INTC Stock

This is the rise CEO Brian Krzanich has been pointing toward since he was appointed in May 2013. Since then INTC stock is up 72%. That trails the Nasdaq’s rise of almost 90%, but you can expect Intel to catch up with the averages from here.

Intel is a great technology ocean liner that takes a long time to turn. But it finally has turned, and when it puts on a head of steam, INTC stock holders will benefit.

Dana Blankenhorn is a financial and technology journalist. He is the author of the historical mystery romance The Reluctant Detective Travels in Time, available now at the Amazon Kindle store. Write him at danablankenhorn@gmail.com&nbsp;or follow him on Twitter at @danablankenhorn. As of this writing he owned shares in MSFT and AMZN.

Apple's stock rose 3.7 percent on Thursday, putting the stock on pace for its ninth positive day in the past 10 days of trading.