The Cboe Volatility Index, often referred to as a measure of investor fear levels, is a guide to human nature, says a prominent Wall Street bull. And that guide indicates the lows are in for the stock market and that new highs may be no more than months away, he says.

Canaccord Genuity analyst Tony Dwyer has characterized the stock markets early February plunge as a phenomenon known as a shock drop, in which a correction is sharp enough to cause the 10-week rate of change in the Cboe Volatility Index
VIX, -9.84%
or VIX, to spike to 125. The rate of change, or ROC, measures the percent change in price from one period to the next.

Stocks plunged in early February, with the S&P 500
SPX, +1.02%
and Dow Jones Industrial Average
DJIA, +0.84%
falling more than 10% from all-time highs set in late January, meeting the widely used definition of a correction, as the VIX spiked.

Stocks subsequently traded sideways, with the S&P 500 temporarily trading below its 200-day moving average in early April and coming within a whisker of retesting February low before bouncing back toward the middle of its recent trading range. The S&P 500 remains nearly 6% below its all-time high, while the Dow is off 6.7%.

The VIX itself, which uses S&P 500 options to measure trader expectations for volatility over the coming 30-day period, has declined after spiking above 50 amid the initial selloffa move exacerbated by the implosion of trading products that facilitated bets that volatility would remain subdued.

The VIX was trading Tuesday at 15.58, back below its long-term average of around 20. The VIX 10-week ROC, meanwhile, has dipped below zero.

Dwyer observed in February that shock drops typically see stocks bounce and then retest the low as volatility begins to decline before moving on to new highs. In a Monday note, Dwyer said he saw no reason to change what worked so well in analyzing a human-nature-driven shock drop. He elaborates:

Stocks appear to be following the script, he said (see chart below). 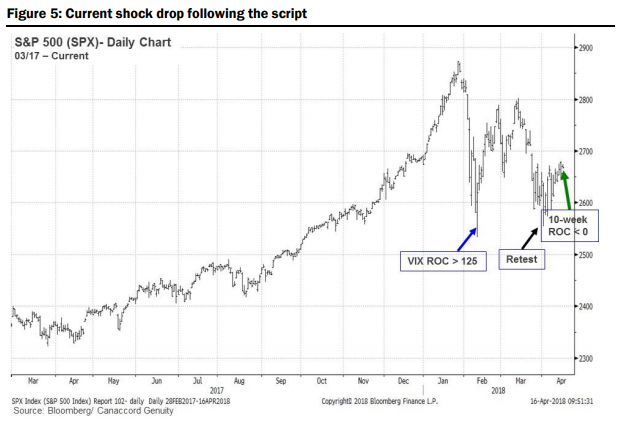 Looking at past shock drops, stocks in 1998 moved straight to a new high following a retest of the low, while 2010 and 2011 saw additional volatility before setting new highs, Dwyer said. In all three cases, when the VIX rate-of-change dropped below zero, the low was in and new highs were less than four months later, he found.

That didnt happen in 2008, however, which Dwyer said he doesnt see as applicable as it came in the midst of the global financial crisis. And while the sample size is small, Dwyer argued that such extreme human nature reactions should be expected to be infrequent.

So what is the human-nature element? Dwyer said the episodes show that, absent a yield-curve inversion that shuts down credit, each intermediate ter