For many in Pakistan it’s a question of when — rather than if — the nation will go to the International Monetary Fund for financial support to pay its soaring foreign debt as reserves dwindle.

External debt and liabilities has increased 76 percent to 10.6 trillion rupees ($92 billion) since June 2013, taking the ratio up to 31 percent of gross domestic product, the highest in almost six years. Pakistan’s debt will continue to grow as it has the highest financing need as a percentage of GDP in emerging markets over the next two years, according to IMF projections. 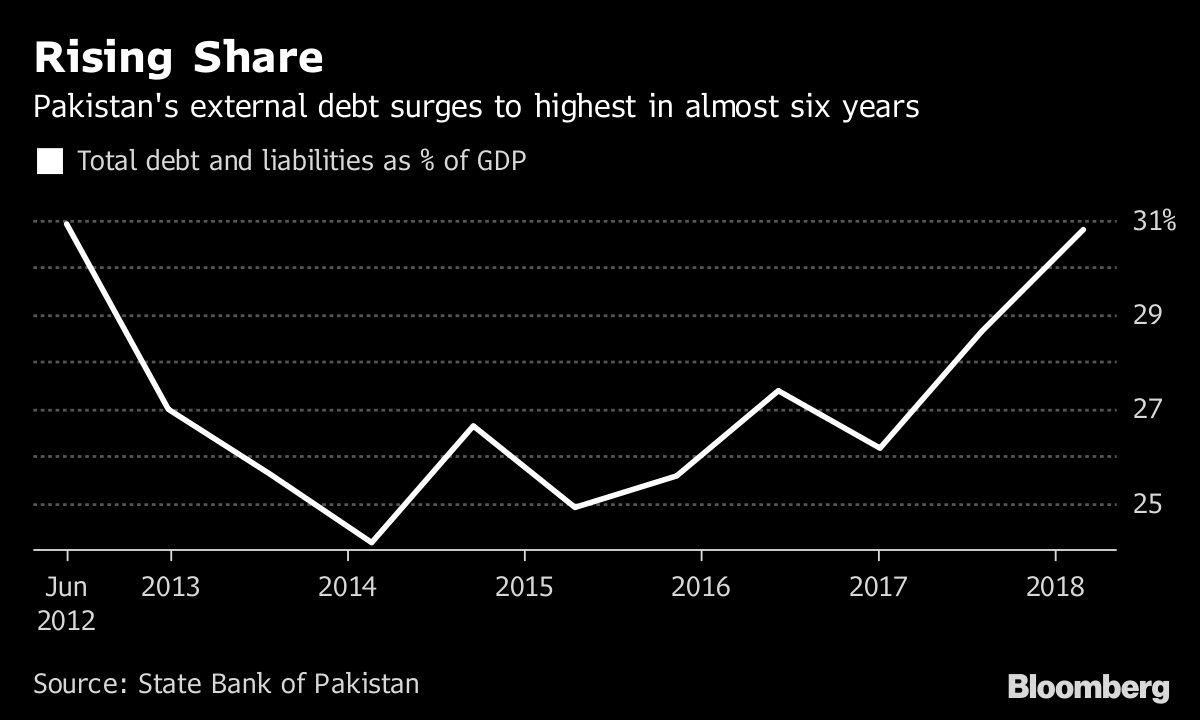 It’s not an unusual situation for Pakistan, which has gone through decades of debt blowouts and balance-of-payment imbalances. South Asia’s second-largest economy has received 12 IMF bailouts since the late 1980s and completed its last loan program just two years ago.

The nation is once again facing a crunch after foreign-exchange reserves dropped to the lowest in more than three years, forcing authorities to devalue the currency twice in recent months and hike interest rates. To help repay debts and keep the economy going, another IMF loan is possibly the next step.

“It’s a familiar situation,” said Yousuf Nazar, a former Citigroup Inc. banker and author of The Gathering Storm: Pakistan. “We have rising debt servicing and faltering growth — the short-term solution is the IMF, it’s probably a matter of months.” 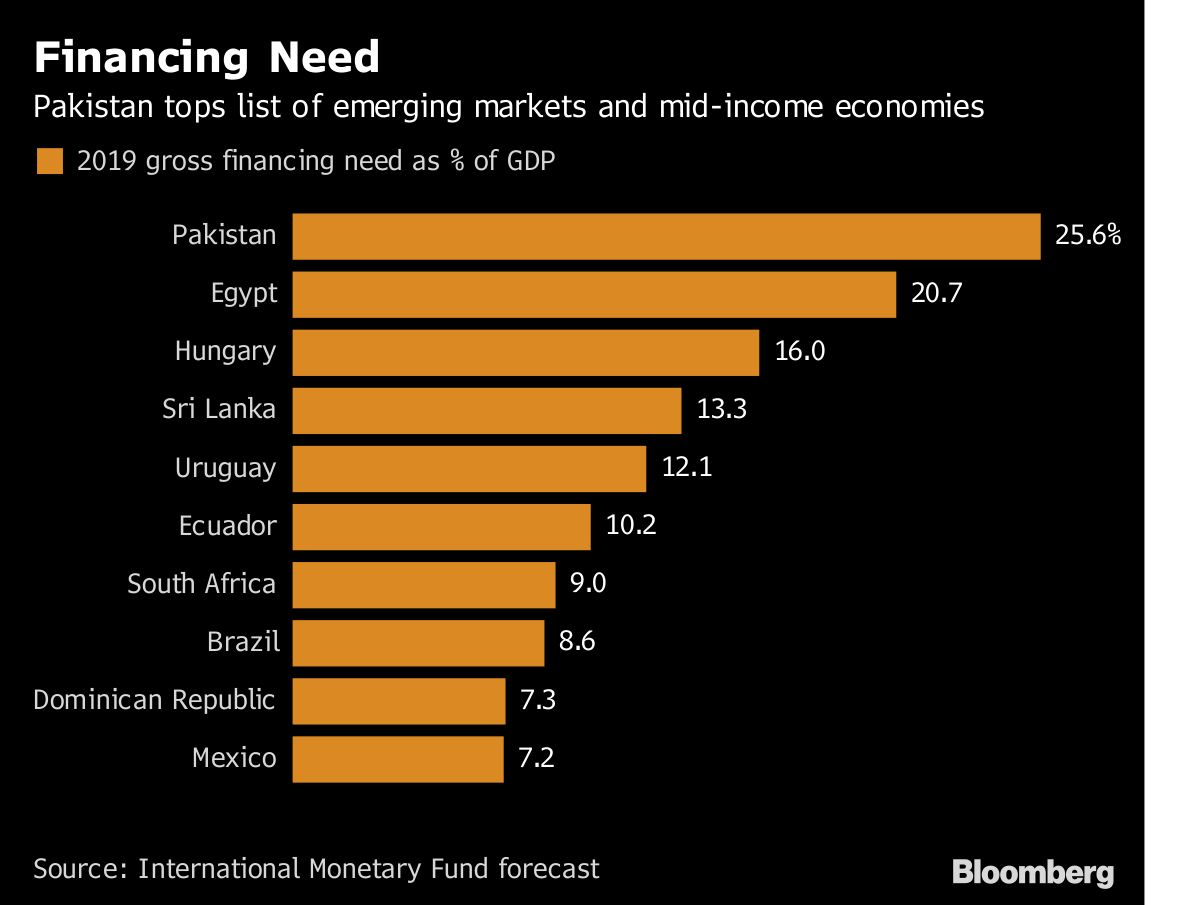 Pakistan’s economic picture was generally rosy up until the past year. The current government, which will hand over to a caretaker administration on Friday ahead of July 25 elections, has managed to boost economic growth to its highest level in a decade. That was aided in part by low oil prices, the completion of a $6.6 billion IMF program in September 2016 and the Chinese financing of about $60 billion in infrastructure across the country as part of Beijing’s flagship Belt and Road initiative.

The growth boom has come with rising imports of Chinese machinery and other goods, widening Pakistan’s current-account deficit by 50 percent this year. Added to that is Islamabad’s mounting debt to Beijing and questions over how it will eventually repay billions of dollars over the medium to long term.

Surging oil prices are making matters worse. The central bank recently warned that “the balance of payments has further deteriorated” because of rising crude and investor inflows remaining limited.

Yet the ruling Pakistan Muslim League-Nawaz party, which will face a heated election battle against its main opposition rival and former cricket star Imran Khan, has continually denied that it will need to go to the IMF for help. Finance ministry officials didn’t respond to calls seeking comment.

The government is instead borrowing more. It plans to raise 1.1 trillion rupees of foreign debt in the fiscal year starting from July 1 compared with a budgeted 810.7 billion rupees. Major lending sources will be commercial banks, global bonds and China, according to finance ministry data. 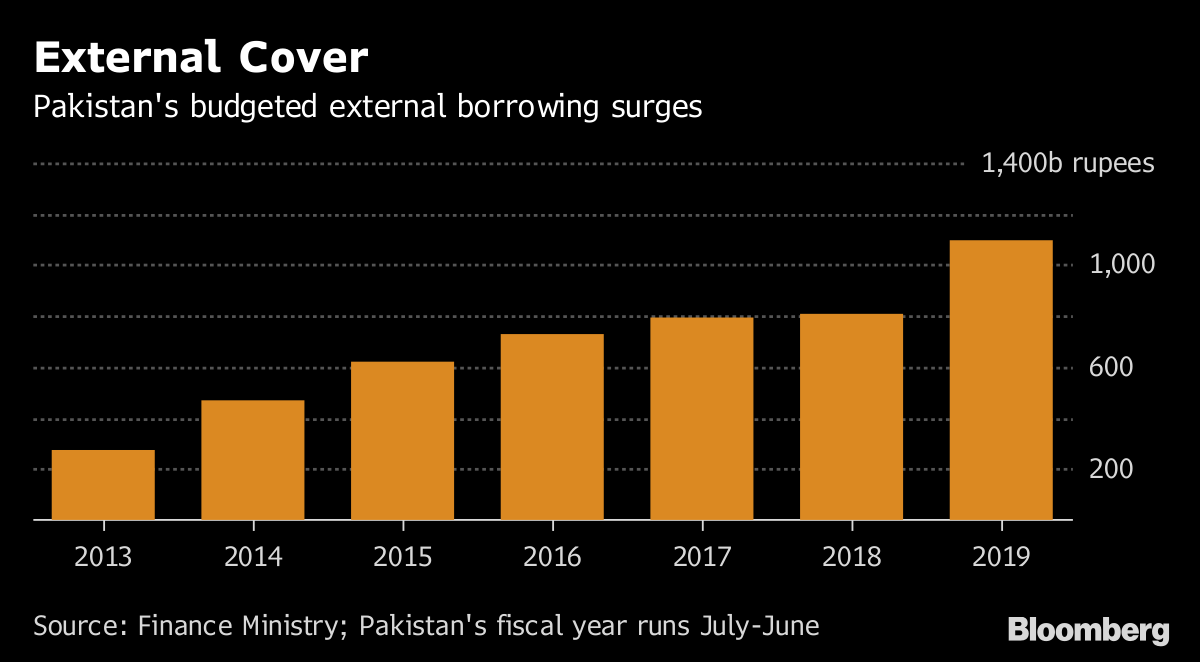 “If you don’t take loans your growth will be the lowest, debt brings growth world over,” Prime Minister Shahid Khaqan Abbasi said in Islamabad this week.

In the next five months about $3 billion will need to be paid to creditors including the IMF, World Bank, Paris Club and China and the nation may try to reschedule some of those, said Vaqar Ahmed, the deputy executive director of the Sustainable Development Policy Institute in Islamabad. 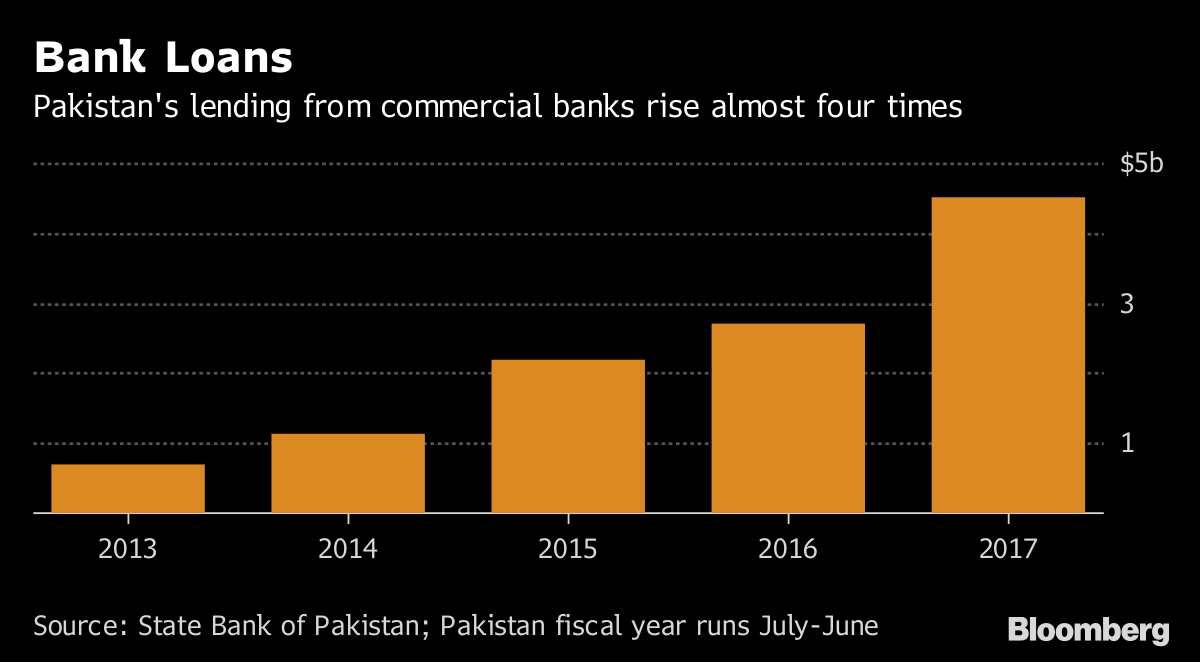 As such, Pakistan is close to bankruptcy and will need a bailout that may come from the IMF, said Asad Umar, the former chief executive officer of Engro Corp. — one of the nation’s largest conglomerates — who is now a senior politician in Khan’s party and pegged as the likely finance minister if they win the election.

“The pressure has started to come in the numbers now,” said Umair Naseer, an analyst at Topline Securities Pvt. in Karachi. “Avoiding an IMF loan program is very difficult.”

Highest government debt as percentage of GDP in Asia 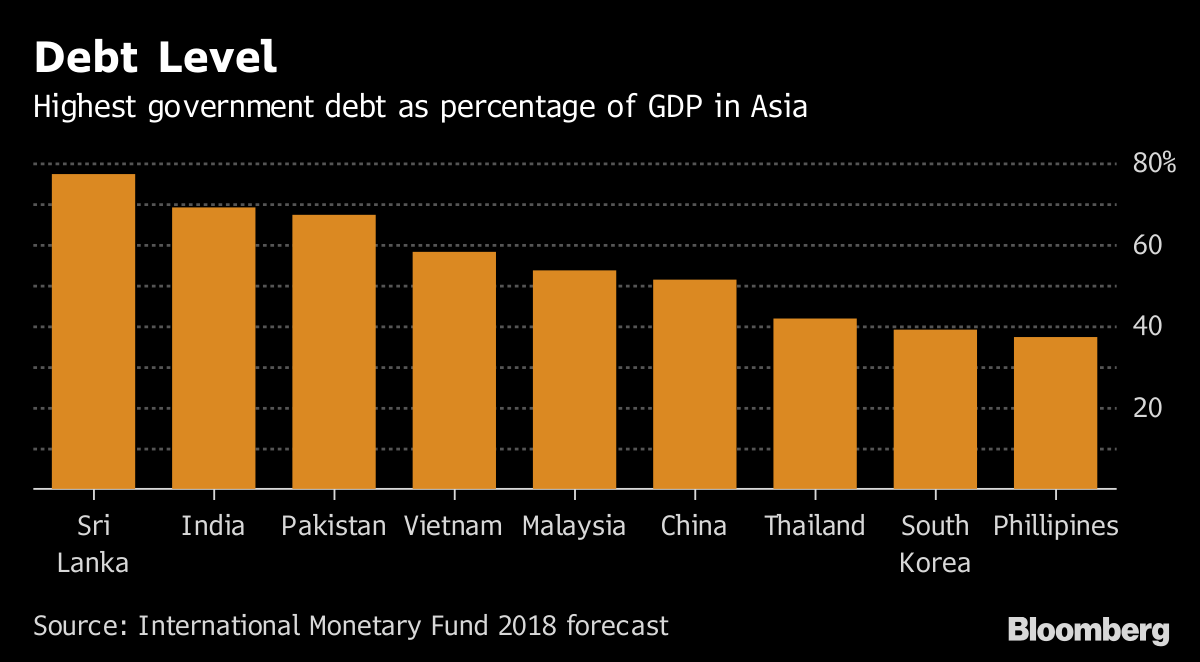