People often say that the Tesla Model 3 is aimed at “mainstream” car buyers. If that’s true, then Tesla has terrible aim.

I spent a day or so driving a Model 3 rented through Turo, the peer-to-peer car rental company. It’s a handsome car that’s fun to drive, but the Model 3 is definitely not mainstream. It feels like a Silicon Valley car designed for Silicon Valley people. You know, the sort of people who use the word “disrupt,” but not to describe what their kids do at dinner.

The car I drove had a sticker price of $56,000, far above the $35,000 base price. For that price, it had a larger, more powerful battery giving it an estimated 310 miles of range rather than 220 miles, as well as faster acceleration. It also had Tesla’s semi-autonomous “Enhanced AutoPilot” system and a number of other premium features like blue paint. Only black is available at the base price.

When the older and more expensive Tesla (TSLA)Model S first debuted, it was simply the best car you could buy at its admittedly high price — gasoline or electric.

As I drove, I went through the mental exercise of subtracting out $21,000 in options to get down to the base car. Then I considered how that would hold up in the universe of $35,000 cars. Stripped of options and features, the Model 3 would still be a pretty good car, but I can think of other vehicles that would offer more for that money. 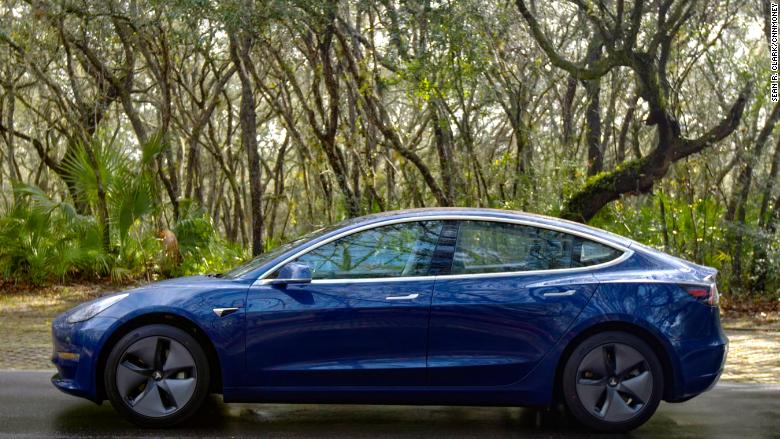 Whatever its flaws, the Tesla Model 3 is a good looking car.

There is one major, and potentially dangerous, flaw. There are no gauges in front of the driver — but that’s not the problem, exactly. There’s a big touchscreen to my right, and I had no problem at all glancing over to check my speed and other data. Lots of cars these days have center-mounted computer screens so moving that screen up, making it bigger and just putting everything you want to see there made complete sense to me.

What doesn’t work so well is putting so many controls there, too. To do almost anything, from adjusting the mirrors to tweaking the car’s speed while driving in Autopilot, I had to use the screen. There are two unmarked knobs on the steering that are involved in various functions but, before you can use the knobs, you have to poke around on the big screen first. It’s annoying and most people will hate it. More importantly, it’s terribly distracting.

Electric cars are marketed as being good for for the environment, but here’s something you may not be aware of — they’re a lot of fun to drive. With instant power from electric motors, and no transmission gear-shifts to wait for, electric cars respond instantly when you press on the accelerator. They can also respond quickly as you raise your foot and the car slows as it draws power back from the wheels. This way, you can drive along twisting roads while rarely ever touching the brake pedal.

In the Model 3, highway on-ramps became thrill rides. Squeezing down on the accelerator pedal brought a rush of speed usually associated with roaring V8 engines. Instead of roaring, there was the barely audible whine of a spinning electric motor as the merge lane came rushing towards me. 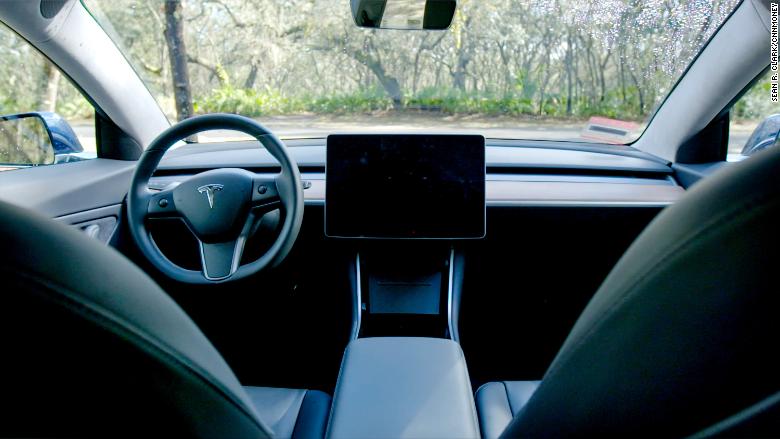 The Tesla interior relies much too heavily on the central touch screen.

It wasn’t the cannon-like shock of “Ludicrous Mode” — that’s not available on the Model 3 yet. Still, this car’s power was plenty for daily use. (Really, “Ludricous Mode” is ludicrous, anyway.) And the Model 3 rips through curves thanks to a battery pack that holds its weight down low. But I did wish for a more finely tuned suspension that could have swallowed bumps more nicely while still providing that sort of handling, though.

If Tesla could somehow bring back a few old-switches and knobs, I’d like this car much better. As it is, lots of people will buy the Model 3 and lots of them will love it. If I wanted to give someone their first taste of electric driving, though, it’s not the car I’d put them in. Unless I really wanted to annoy them.