The idea of a robot invasion first triggered anxieties around 200 years ago, when textile workers in England called “Luddites” destroyed factory machinery that they feared would replace them. The name has come to describe opposition to all forms of technology, but the original Luddites were merely concerned with saving their livelihoods. 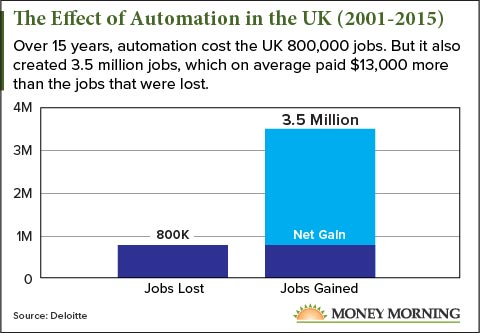 Mass Unemployment Make No Sense – and That’s Important for Investors

If robots were really putting us on a path to mass unemployment, they would end up producing a whole lot of products that nobody could afford to buy.

The economy as we know it would die.

That would be devastating for investors, too, since businesses depend on consumers to thrive.

It is true, of course, that the work people will be doing in the future is different than what it is today. And that’s scary in the transition period.

After all, if you told someone a century ago that we would soon be able to produce more food than ever before with a fraction of the agricultural labor force that existed at that time, you probably wouldn’t get a friendly reaction.


But we’re much more prosperous today than when the majority of the population worked on farms.

Likewise, the transition away from jobs that can be automated may seem scary, but some companies are already finding new ways to make their employees more useful in the robot age. Because they value the ingenuity and adaptability of the people working for them, these are the companies that are going to get the most out of the rise of the machines and deliver the biggest gains for shareholders.

Let’s take a look at them now…