In its frenzied rush to write a tax bill that could win enough votes, the Senate inadvertently weakened a powerful tool for promoting innovation.

The research and development tax credit allows companies to write off a portion of their spending on experimentation for new and better products. It’s been particularly popular with drug companies and the software industry since first being enacted in 1981.

After the credit was made permanent in 2015, the Treasury Department estimated it would cost $148 billion between 2017 and 2026, making it one of the largest tax breaks in the revenue code.

The credit survived in both the House and the Senate tax bills, which eliminated several tax breaks in order to justify lowering the corporate tax rate to 20%. And it would have continued to help corporations lower their taxes even further, but for a last-minute decision by the Senate to keep the alternative minimum tax (AMT) instead of repealing it, as conservatives have long sought.


The AMT serves as a backstop that prevents corporations from taking so many credits and deductions that they pay no tax at all. Currently, companies calculate their “regular” corporate tax rate which tops out at 35%, minus any exemptions and pay either that or a 20% rate on an “alternative” income formulation, whichever is higher. The Treasury’s most recent published analysis of the corporate AMT, from 2002, found that it applied to only about 13,000 businesses.

The AMT was repealed in the House’s version. But when the bill finally passed the Senate in the early hours of Saturday morning, the AMT remained in place. If it’s not removed, that could render the R&D credit moot, since more companies will have to pay a minimum tax under the AMT that can’t be lowered further by most credits or deductions.


“With the current proposed changes, there’s going to be more middle market companies that are going to be subject to the AMT, and would lose the ability to get R&D credits,” says Charles Goulding, CEO of a Long Island-based tax consultancy that specializes in research credits.

The snafu highlights the challenge of balancing a drive to lower overall rates with the desire to use the tax code as a carrot that rewards socially and economically beneficial behavior, like investing in research. When companies aren’t paying much in taxes in the first place, it’s more difficult to offer them incentives.


Of course, companies would still get a very large tax cut, freeing up money that could be used for research and development. But studies suggest that making it cheaper to invest in research than pay out larger dividends to shareholders, for example, leads them to innovate more than they might otherwise. 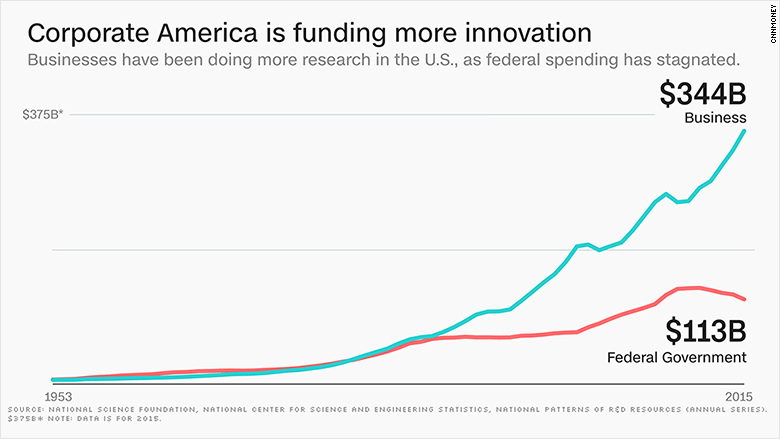 
But it’s still a problem for large companies, like Google (GOOG) and Intel (INTC, Tech30), which account for the vast majority of the value of the credits. Caught off guard, they mobilized over the weekend to try to get the AMT taken out of the final bill.

“Retaining the AMT in reform is even more harmful than it is in its present form,” wrote the U.S. Chamber of Commerce in a blog post on Monday morning. “This cannot be the intended impact from a Congress who has worked for years to enact a more globally competitive tax code.”


The AMT dust up isn’t the only way in which tax reform could hurt scientific research, however. The House and Senate bills also require research expenses to be amortized over several years, rather than deducted immediately, which draws out the benefit for those who claim the credit.

“While it is true that to some extent this is a timing issue, it is in fact a significant detriment to small companies who need the money sooner,” says Steven Miller, national director of tax at the consultancy Alliantgroup.

Tax reform could have repercussions for publicly funded research as well. Federal science funding has been declining as a share of GDP since the 1970s, and took a particularly hard hit during the recession. President Trump’s proposed “skinny budget” from the spring, which didn’t go anywhere, would have further slashed budgets for research supported by the Department of Energy and the National Institutes of Health.

Adding $1 trillion to the deficit won’t brighten the picture for federal science funding, says Joe Kennedy, a fellow with the Information Technology and Innovation Foundation, a D.C.-based think tank that has pushed for the R&D tax credit to be expanded.

“I think a much much better bill could’ve been passed,” Kennedy said. “Corporate reform is so important. But is it worth introducing all these other flaws?”