Gaming companies aren’t differentiated by the table games they offer, what slot machines they have, or even what comps they give to players. If you think about it, casino games themselves are pretty similar whether you’re in Iowa or Macau.

What differentiates gaming companies today are the resorts they build and where those resorts are located. Put a megaresort on the desolate north end of the Las Vegas Strip, and you might go bankrupt before it’s completed (see Echelon, Las Vegas Plaza, and Fontainebleau), but if you’re building a multi-billion dollar resort in Macau or Singapore, it’s almost impossible to lose money. No company has better locations than Las Vegas Sands (NYSE:LVS), which is why it’s one of the most profitable companies in gaming. Here’s where the company’s money comes from. 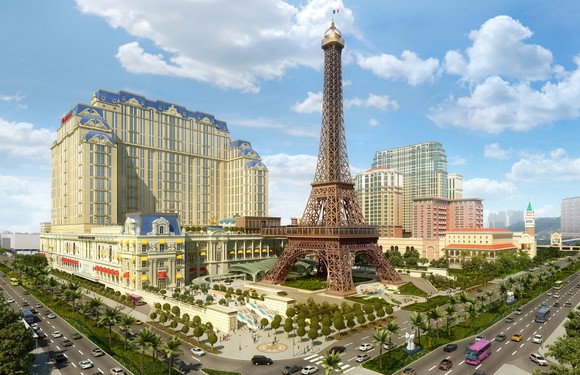 The charts below show where consolidated adjusted-property EBITDA and hold-normalized property EBITDA — which adjusts for good and bad luck on the casino floor — comes from for Las Vegas Sands.

You can see that Macau accounts for 59% of hold-normalized (adjusted for “normal” luck in a casino) adjusted-property EBITDA, Singapore accounts for 30%, and the U.S. overall accounted for just 11%. The U.S. number will fall to about 8% of total EBITDA once the sale of Sands Bethlehem closes, so Asia is where Las Vegas Sands makes a vast majority of its money.

Asian gaming is very different from the U.S.

Within the resort, cash flow centers can be very different depending on location. In Las Vegas, Las Vegas Sands generated 29% of revenue on the casino floor in the fourth quarter compared to 34% from hotel rooms, and 20% from food and beverage. In other words, the casino isn’t the cash cow in the U.S.

In Macau and Asia more broadly, the situation is the exact opposite. The chart below shows that 68% of Macau’s department profit contribution comes from the casino. Mass-market tables are the dominant revenue and profit driver for Las Vegas Sands, accounting for over half of profits. 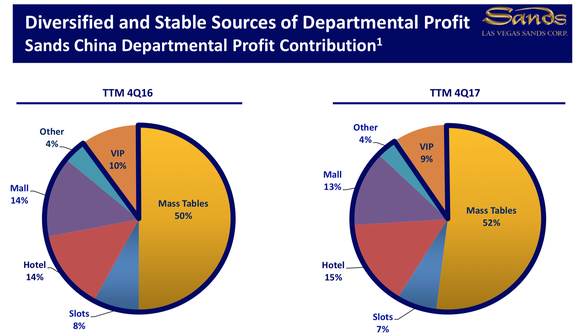 In Singapore, 79% of revenue came from the casino in Q4 2017, so we see similar dependence on gaming across Asia.

The king of gaming in Asia

Over the long term, being exposed to the gaming market in Asia has been fantastic for Las Vegas Sands. As an example, Marina Bay Sands cost $5.5 billion to build in 2009 and generated $1.76 billion in 2017, an astounding 32% of the construction cost in a single year. Venetian Macau cost $2.4 billion in 2007 and generated $1.13 billion last year. Any gaming company would take those returns.By comparison, Venetian and Palazzo Las Vegas cost a combined $3.7 billion to build and generated $391 million in property EBITDA in 2017, or 11% of construction costs.

Despite its name, Las Vegas Sands makes most of its money in Asia, and that’s why it’s a cash cow in the gaming industry. Right now, there’s no sign the money will stop flowing anytime soon.