The figure below shows the U.S. age-adjusted mortality rate from 1900 to the present. In 1900, about 28 men out of 1,000 died in a given year; by 2016 that number had dropped to 9. Mortality rates have always been higher for men than for women, although the gap appears to be narrowing in recent years. With the notable exception of the flu pandemic in 1918, mortality rates have generally dropped year after year. 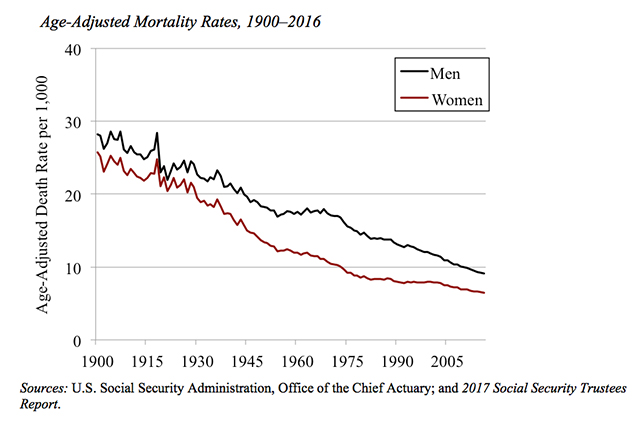 The question of interest is the pace at which mortality rates decline rapidly or slowly. The figure below shows the annual improvement in mortality rates for men and women combined since 1900. Two points are worth noting. First, the rate of change varies significantly over time. Second, we are currently in a downward part of the cycle today. 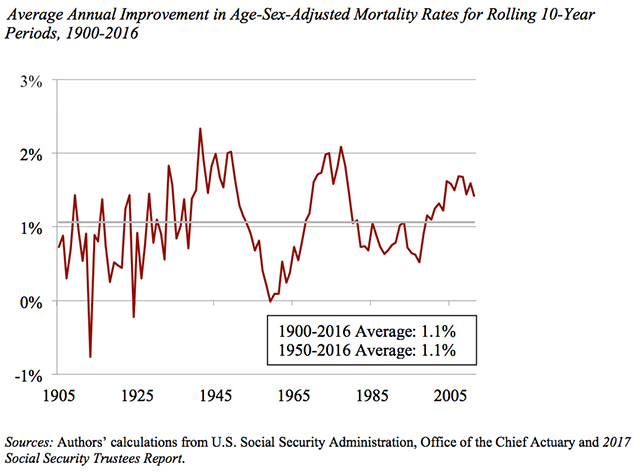 Looking at the most recent period between 1975 and 2016, the pattern of declining, then increasing, and now declining rates of mortality improvement could be explained as follows:

2) Rise in mortality improvement between 1990 and the mid-2000s. On the favorable side, the new drugs and technology became more universal and the decline in male smoking began to have a favorable impact. In addition, the decline in female smoking had a positive effect in the 2000s. At the same time, improvements were tempered by the rise in obesity.

3) Decline in mortality improvements since 2005. The decline could be attributed to the exhaustion of the positive effects of the cardiovascular drugs and technology. That is, once everyone at risk of heart disease is already taking a statin, further dissemination cannot increase the rate of mortality improvement. Similarly, the gains from the decline in male smoking have mostly run their course, although the gains in the decline in female smoking continue. And the negative effects of obesity are hampering improvements in mortality.

The question is whether recent fluctuations say anything about mortality projections over the next century. Will the future mirror the past, with mortality rates of improvement fluctuating around the long-term rate of about 1% a year, or are the big gains behind us, with mortality improving less rapidly in the future? It matters.