First Solar (NASDAQ:FSLR) is easily the most financially successful solar manufacturing company in the U.S. Dozens of competitors have gone bankrupt over the past decade, but First Solar has expanded manufacturing and generated billions in profits, which are the envy of the rest of the industry.

To better understand how First Solar has built a competitive advantage in solar, let’s look at where the company makes its money. 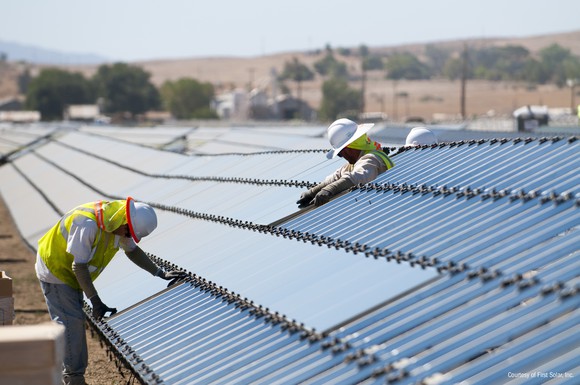 Manufacturing is the key

The engine that drives First Solar’s whole business is manufacturing. The company’s thin-film technology involves depositing a cadmium-telluride-based semiconductor on a glass backing; it has proven to be very cost competitive for customers while generating strong profits for First Solar. Thin-film panels perform better than competing technologies in extreme conditions like the heat of the desert where solar energy is abundant.

The chart below shows how First Solar plans to grow its manufacturing base over the next three years. Series 4 panels are the legacy panel design that’s being decommissioned in favor of Series 6 panels, which are more efficient and larger in size. Higher efficiency obviously squeezes more energy production from the same amount of space, but the larger size is important because it helps lower the cost of installation.

Series 6 production began late in 2017 and will continue to replace Series 4 through 2020, when First Solar is expected to hit 5.7 GW of manufacturing capacity. That’s enough solar panels to power 935,000 homes each year and enough to make First Solar one of the largest solar manufacturers in the world.

Solar panels aren’t the only business

The majority of First Solar’s business in recent years has been developing, building, and selling solar developments. But the business model is changing as First Solar turns its focus to selling solar panels to third-party developers. The customer then chooses racking, inverters, and other components that may come from another supplier. The advantage for First Solar is that it doesn’t have to put projects on the balance sheet or deal with risks like changing interest rates, which can turn a profitable project into a money-loser overnight.

To put the transition to panel sales into perspective, in 2017 First Solar generated $1.93 billion of its $2.94 billion in sales from solar power systems and just $806.4 million from module sales. When the transition to 4.7 GW of panel-only sales to 1 GW of solar development sales is complete, the development business will likely account for less than 40% of revenue. 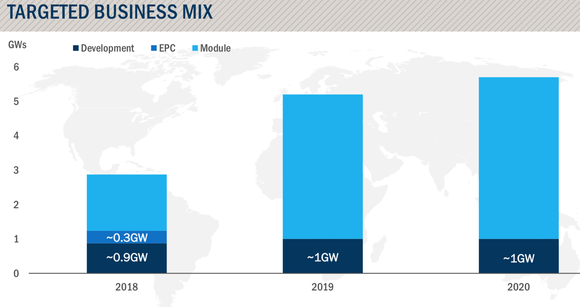 On top of solar panel and development sales, First Solar also offers operating and maintenance agreements to customers. This isn’t a large portion of the business, accounting for $101.0 million in sales in 2017, but it could be a growing source of revenue in the future. First Solar already has $600 million in noncancelable operating and maintenance contracts that have a weighted average life of 11.7 years, and with production growth in the future, we’ll likely see the backlog continue to grow.

There are different levels of profitability depending on if First Solar is selling solar panels only, doing an entire development, or performing operating and maintenance. One notable item from the table below is that management expects the upgrade to Series 6 solar panels to help margin, one reason it’s moving to more panel-only sales. They’re also seeing incremental development and O&M margin fall versus what’s already contracted, showing increased competition in both segments. 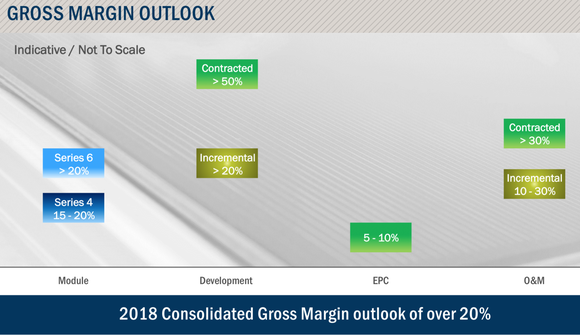 From this chart and the production chart above, we can project long-term profitability for First Solar. If we project that panel-only sales will generate about $0.40 per watt in revenue (a best case scenario) and project development will generate $1 per watt in sales, thenbased on industry data,1 GW of projects and 4.7 GW of solar-panel-only sales will generate $2.9 billion in ongoing revenue and at least $600 million of operating profits. Given the expectation of $400 million to $410 million in operating expenses, we can expect at least $200 million in operating profit based on the numbers above.

Built to last, but maybe not grow

You may notice that the $2.9 billion revenue projection in the previous paragraph is the same as the $2.9 billion in revenue generated in 2016 and 2017. But it’s based on 2020’s production of 5.7 GW, more solar panels than the company has ever made. First Solar’s transition to less solar system development and a greater percentage of sales from solar-panel-only sales will actually bring down revenue per watt produced. Management is betting that it’ll also lead to higher margins than development would, but investors shouldn’t think that this will be a growth company because when you take a step back and look at how First Solar makes its money, the company doesn’t have many revenue growth options ahead.