This cold jobs-day morning has stocks skating toward a weekly win, with the Dow apparently feeling pretty snug above 25,000.

The tech-heavy Nasdaq-100 has been this holiday-shortened weeks bomb cyclone among the stock indexes, exploding for a weekly gain of 2.9%, ahead of the Dows 1.4% rise.


Shares in the Canadian company now focused on software after becoming a smartphone also-ran have jumped 20% for the week as of yesterdays close, touching levels last seen in 2013.

BlackBerry has a lot of potential to run, and if youre playing this long term, then I would definitely be looking to hold this, says ChartYourTrade.com founder Michael Lamothe for our call of the day.

The stock has been a beast lately, and it has shown it can attract buyers around its 40-week moving average, Lamothe says. That chart level is shown in graphic below.

BlackBerry shares are up 20% for the week as of Thursdays close.


This weeks leap is being pinned on BlackBerrys deal with Baidu
BIDU, +0.07%
the Google of China that calls for the two companies to work together on self-driving car technology. It follows other BlackBerry pacts related to autonomous-driving vehicles, including ones with chip giant Qualcomm
QCOM, +0.14%
and auto supplier Delphi
DLPH, +4.52%
.

For shorter-term traders, Lamothe advises selling into the recent strength. He has been doing exactly that, as he had planned to make BlackBerry a quick swing trade, he says.

Also among those juiced about BlackBerry is financial blogger and trader ChessNwine.

This is going to be the real test: Can BlackBerry make a meaningful higher low now above this $12-$13 area? he says. That is a big, big level long term. (Chart watchers often look for higher lows, as they can signal a downtrend has flipped into an uptrend.)


For his part, BlackBerry CEO John Chen has been declaring that his company is baa-aaack or in his words, not in a turnaround mode anymore.


On the cryptocurrencies front, Ripple coins are dropping after crypto exchange Coinbase gave them the cold shoulder, while bitcoin
BTCUSD, +6.26%
is advancing.

See the Market Snapshot column for the latest action. 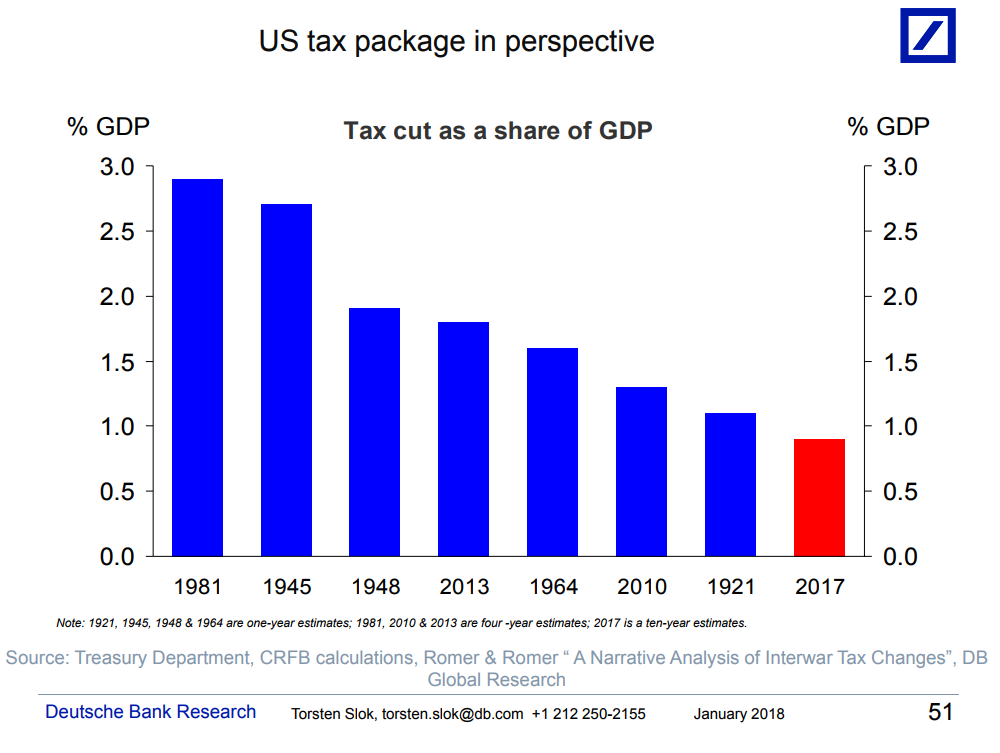 
All the tax-reform hype might be overdone, suggests Deutsche Bank economist Torsten Slok, who offers the chart above. It shows where the latest planned tax cut ranks as a percentage of GDP, revealing its below what we got in 2010 and 2013.


While it has been a nice week for BlackBerry blown out of the water by the iPhone years ago Apple
AAPL, +0.46%
is scrambling to safeguard its gadgets from the Meltdown and Spectre chip bugs.


The December reading on nonfarm payrolls is due to hit at 8:30 a.m. Eastern Time, and a lack of wage growth might mean a muted celebration.


Corona beer parent Constellation Brands
STZ, -0.75%
is among the companies on the earnings docket before the open.

Is Ripples co-founder becoming the worlds richest man? Maybe not.

The Trump administration is seeking $18 billion for new barriers along our border with Mexico, offering the most detailed description yet of the presidents planned wall.

When the temperature goes down, they literally shut down, and they can no longer hold on to the trees, which is why you get this phenomenon in South Florida that its raining iguanas. Ron Magill, communications director for Zoo Miami, weighs in on the fallout from this weeks big winter storm.

The scene at my backyard swimming pool this 40-degree South Florida morning: A frozen iguana. p