Shares of Tesla (TSLA ) popped 3.53% on Monday to close at $370.83, inching slowly closer to their 52-week high. After a series of positive developments, spread out over the last few weeks, Tesla’s stock price has gone on a sustained run that has many investors thinking the electric car company might be back on track. So let’s take a look at the most recent Tesla news and give investors a quick preview of what’s to come.

Tesla’s Model 3 sedan could propel the company to the next level and help it compete directly against the likes of General Motors (GM ) , Volkswagen (VLKAY ) , Ford (F ) , Toyota (TM ) , and other more established automakers in the electric vehicle market. The mass-market electric car sports a price tag of $35,000, by far Tesla’s lowest priced EV. However, Model 3 production has become a major issue for Tesla over the last year, which contributed directly to many of Tesla’s 2017/18 setbacks.

The tweet comes after the outspoken CEO sent an email to Tesla staff Friday night in which he congratulated them on their Model 3 progress, while also noting that “radical improvements” need to be made in order to hit the company’s targets.

Investors should also note that Musk purchased roughly 72,000 Tesla shares last week, worth almost $25 million. This move helped signal further confidence in Tesla, while Musk also told short sellers they “have about three weeks before their short position explodes” (also read: The “Short Burn of the Century” Seems to be Taking Shape in Tesla).

Last week, Tesla said that it will lay off about 3,500 workers amid its push to meet its Model 3 production goals. The job cuts are aimed at streamlining the company. “As part of this effort, and the need to reduce costs and become profitable, we have made the difficult decision to let go of approximately 9% of our colleagues across the company,” Musk wrote. “These cuts were almost entirely made from our salaried population and no production associates were included, so this will not affect our ability to reach Model 3 production targets in the coming months.”

Shares of Tesla were still down roughly 0.5% over the last year, before Monday’s climb. Tesla’s decline was largely due to Model 3 production woes and mounting debt concerns. With that said, investor confidence has slowly returned. 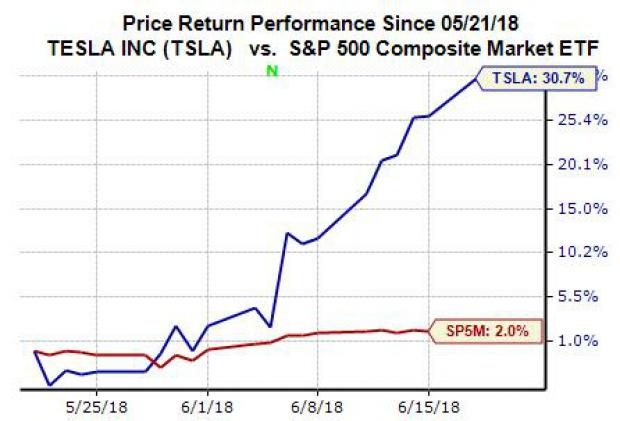 Year to date Tesla has seen its stock price surge roughly 20%. Over the last month, investors will note that TSLA has performed insanely well, on the back of newfound positivity that Tesla will finally be able to churn out Model 3 sedans, while focusing on profitability.

Our current Zacks Consensus Estimates are calling for Tesla’s Q2 revenues to soar by nearly 45% to hit $4.04 billion. Looking ahead to the full-year, Tesla’s revenues are expected to reach $19.07 billion, which would mark a 62% climb from fiscal 2017.

Tesla is currently a Zacks Rank #2 (Buy) that investors should pay close attention to because if the company finally reaches its Model 3 production goals it could help push its stock price even higher.

And this outperformance has not just been a recent phenomenon. Over the years it has been remarkably consistent. From 2000 – 2017, the composite yearly average gain for these strategies has beaten the market more than 19X over. Maybe even more remarkable is the fact that we’re willing to share their latest stocks with you without cost or obligation.