Maurice Wysocki, an information technology worker, was looking to branch out on his own as a contractor last year, allowing him a more flexible schedule and sharply reduced hours some months of the year.

But then the Poughquag, New York, resident hopped on the federal health care exchange to see how much he would have to pay for insurance for himself, and his wife and two children.

“It was a huge amount,” Wysocki, 49, says, roughly 10 times his current costs as an employee of a financial services company. “I chickened out.”

Many Americans who would like to dial back and work part time have been discouraged from doing so because of sharp premium increases in the individual health insurance market the past few years, experts say. They include single mothers, baby boomers approaching retirement and disabled people.

Top salaries: These are the 25 highest paying jobs in the US

Electric cars: Comedian Jay Leno says ‘all modern cars are good,’ but electric cars ‘will be the future’ 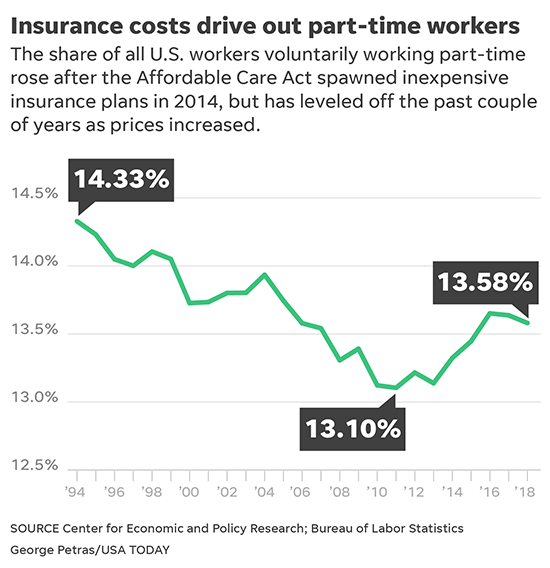 As a result, analysts say, the portion of U.S. employees choosing to work part time has leveled off and then dipped slightly, edging down further early this year. It had been rising the first few years after the Affordable Care Act (ACA) took effect in 2014 and provided part-time and freelance workers, as well as the unemployed, less expensive health insurance options than they previously had.

Some of the health cost hikes can be traced to market forces, while others are due to Trump administration efforts to weaken the health care law, says Mark Hall, director of the health law and policy program at Wake Forest University and a senior fellow at the Brookings Institution. 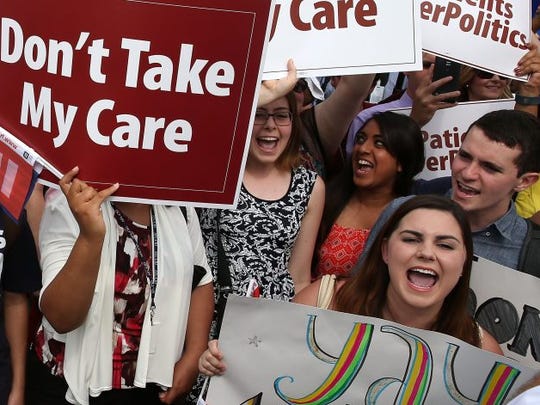 “The ACA is still there and you can still get insurance, but there’s a lot of uncertainty about how long the ACA is going to be there,” Hall says.

After the ACA, also known as Obamacare, took effect on January 1, 2014, the share of employed Americans voluntarily working part-time rose steadily from an average 13.1 percent in 2013 to 13.6 percent in 2016, according to data from the Center for Economic and Policy Research (CEPR) and the Labor Department. That figure generally had been falling for nearly two decades.

But the share of voluntary part-timers flatlined in 2017 and slipped to 13.58 percent last year. In January and February, it averaged 13.4 percent, though the monthly data can be highly volatile.

“We did see an increase in voluntary part-time employment because of the ACA,” says Dean Baker, co-founder of the CEPR. “Now we’re seeing that level off, if not decline, as the ACA becomes less attractive.”

College admissions: Felicity Huffman and Lori Loughlin are not alone. See the list of who has been charged.

NEWSLETTERSGet the Managing Your Money newsletter delivered to your inboxWe’re sorry, but something went wrongA collection of articles to help you manage your finances like a pro.Please try again soon, or contact Customer Service at 1-800-872-0001.Delivery: FriInvalid email addressThank you! You’re almost signed up for Managing Your MoneyKeep an eye out for an email to confirm your newsletter registration.More newsletters//staticassets.gannettdigital.com/gci-static-assets/assets/global/static-web/right-arrow@2x.png“>

Baker acknowledges that some of the drop-off could stem from a low unemployment rate (currently 3.8 percent) that has spawned more labor shortages and pushed up wages, prodding some part-time workers to take full-time jobs. But he says the rise and dip in voluntary part-time employment hews so closely to the timeline of ACA developments that the health care law is the biggest factor.

After the ACA was enacted, health insurance providers competed vigorously with low prices on the federal exchange, Healthcare.gov, and some state exchanges. But the insurers generally lost money from 2014 to 2016 and many left the market. Those that remained responded with 13 percent average premium hikes in 2016, and 20 to 30 percent increases in 2017 and 2018, ultimately allowing the firms to be profitable.

President Donald Trump, who campaigned on repealing the ACA, has further chipped away at the law, Hall says. He spearheaded the elimination of the mandate for individuals to buy health insurance or pay a penalty, encouraging healthy, less-costly subscribers to go without coverage.

The Trump administration also did away with “cost-sharing reduction payments,” which reimbursed insurance providers for cutting out-of-pocket medical expenses for subscribers who qualified for federal subsidies.

More broadly, White House efforts to roll back the health care law have created political uncertainty that caused some insurers to leave the market, a July 2018 report by Hall says.

All of these moves have prompted insurance companies to boost premiums to maintain profits, Hall says.

In addition, he says, the administration has substantially scaled back marketing of the federal exchange.

The Department of Health and Human Services did not respond to a request for comment.

Wysocki says he would have paid more than $20,000 a year for family coverage through the exchange compared with his current $2,160 annual cost as a full-time employee. While he was also concerned about having to constantly drum up new clients as a contractor, the health insurance expense was “a big reason” he nixed the idea.

Amid higher premiums and reduced promotion, enrollment on the federal and state exchanges fell 3.7 percent in both 2017 and 2018, and 2.5 percent this year to 11.5 million, according to Hall’s report. Americans who receive subsidies based on their income and make up the vast majority of exchange subscribers have continued to sign up. But several million of those who don’t get aid have dropped coverage in recent years, Hall says.

But, Baker says, workers who want part-time jobs because of their life situation should have that option as well. Young women who want to spend more time caring for children or pursuing their education account for a disproportionate share of workers in that category, according to a 2018 study by the CEPR.

“You shouldn’t have to work 40 hours just to get health insurance,” Baker says.

“One of the real benefits of the ACA that’s underappreciated is it gave you the freedom to make changes in your life – in (leaving) a job you don’t like, a career you don’t like or a marriage you don’t like,” Hall says.

10 til 2, a Denver-based staffing agency, launched in 2003 with the mission of placing workers in part-time jobs exclusively. But about 18 months ago, the firm added a full-time jobs division. “Employees said they’d like to work full time,” partly because of the health benefits, says CEO Brian Strandes.

Julie Terstriep, 57, a business manager at Western Illinois University, has thought about taking a part-time job to help care for her parents and spend time with her grandchildren. But she figures it would cost $15,000 to $20,000 a year for health insurance to cover her husband, Steve, and herself, compared with her current $2,400 tab. 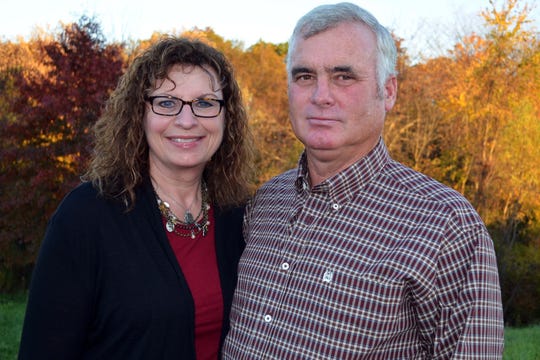 “We just have to have health insurance,” she says, noting her husband owns a 1,000-acre farm with 400 head of cattle and has chronic back problems. “It definitely causes you to make life decisions based on insurance.”

Have you wanted to work part time but stayed in your full-time job? What held you back? Tell Paul Davidson over email pdavdison@usatodaycom, or on Twitter: @PDavidsonusat.

A new Reuters/Ipsos poll shows that nearly 60 percent of likely voters across the nation want the Affordable Care Act to remain in place. Buzz60