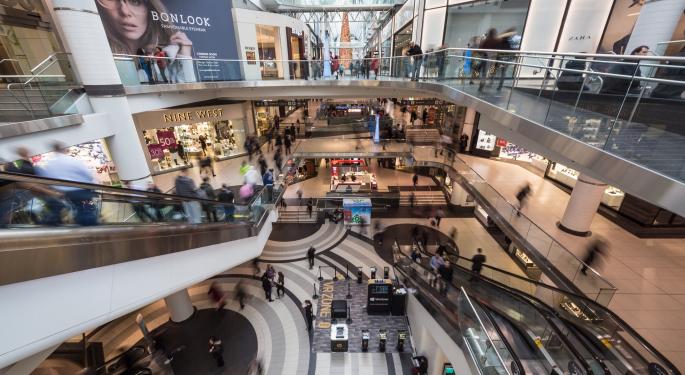 Thanksgiving week dawns with a light economic calendar and earnings season in its last embers. The excitement might tick up on Black Friday when holiday shoppers hit the malls or get online, potentially providing more insight into consumer health as the end of the year approaches.

The market begins this shortened new week still near all-time highs but slowing down a bit from the rally that raged most of the quarter. Stocks had fallen in four of five sessions before last Thursday’s sharp rally, and then showed some weakness early Friday as well. There’s no way to provide an exact diagnosis, but the end of earnings season with its regular catalysts, as well as uncertainty over how tax legislation might play out, could explain some of the recent losses.


Consumer health looks fairly robust ahead of Black Friday, at least judging from mostly positive retail sales data in October and last week’s string of excellent earnings reports from retailers across the spectrum. Almost everyone from Wal-Mart Stores Inc (NYSE: WMT) on down seems to be pulling in customers, and that could augur well for the weeks ahead. The only question might be whether some sales got pulled forward, but it’s a bit early to make that determination.

Black Friday should tell us a lot. We’ll be watching results from some of the major outlets, including WMT, Best Buy Co Inc (NYSE: BBY), Target Corporation (NYSE: TGT), Kohl’s Corporation (NYSE: KSS), and Macy’s Inc (NYSE: M) to see if customers take advantage of various deals. Amazon.com Inc (NASDAQ: AMZN) and other e-commerce outlooks also bear watching. Electronic goods, including phones and video games, appear to be high on many shoppers’ lists, if media reports are correct. So keep an eye on info tech, as well. We’ll focus more on the action in coming days as the big post-holiday shopping extravaganza draws near.


While Black Friday might be the coming week’s focus, tax policy could remain a big factor for several weeks to come, as Treasury Secretary Steve Mnuchin told CNBC Friday he hopes to send a bill to the president by Christmas. There’s probably a lot of wheeling and dealing ahead, and without many other distractions, the market could be pushed and pulled various ways by the debate on Capitol Hill.

From a data standpoint, it doesn’t seem too surprising that the holiday week is a little thin. Leading indicators for October bow on Monday, followed by existing home sales on Tuesday and durable goods and Michigan sentiment on Wednesday. Also on Wednesday, we’ll get a look at minutes from the last Fed meeting when the Fed decided to keep rates unchanged. This is a backward view, but could provide insight into Fed thought as it approaches next month’s meeting, when futures prices indicate a better than 90 percent chance of a rate hike. That meeting is scheduled for Dec. 12-13.


Crude oil scooted higher Friday and could remain worth watching in the days ahead. From a technical standpoint, it appears that front-month U.S. futures bounced off of psychological support at $55 a barrel after not seeing much more selling pressure in an initial probe below that mark. In fact, short covering might play a partial role in the uptick on Friday, as fundamental news was a little lacking. The next big event in oil comes Nov. 30, when OPEC meets again to consider extending current production limits. Analysts have said they expect that to happen, but the impact of these cuts could be cause for debate, because rising prices appeared to trigger additional U.S. output.


From a sector perspective, energy was by far the worst performer over the five sessions through midday Friday, down more than 4.5 percent as oil prices eased. Other decliners included industrials, real estate, and health care. Not too surprisingly, considering healthy earnings, the leading sectors during the last five days were consumer staples and consumer discretionary, up 2.37 percent and 1.12 percent, respectively, as of noon ET Friday. Over the last month, however, info tech leads everyone with better than 6 percent gains compared to just over a 1 percent gain for the broader S&P 500 Index (SPX).


Something else to watch in coming days is performance of international stocks, particularly Japan’s Nikkei. That index has been volatile lately, having risen about 1,000 points over the last month before a sharp pullback in the middle of last week. Also keep an eye on bond yields, which seem to have stabilized near 2.35percent for U.S. 10-year Treasury bonds. That’s roughly in the middle of the long-term range between roughly 2.2percent and 2.45percent, and there doesn’t seem to be a lot of appetite, at least for now, to test things either way. Strong economic and earnings data, along with high expectations for a pending Fed rate hike, haven’t appeared to make much impact on the bond market, and the yield curve continues to be flatter than bullish investors might prefer.


It is a shortened week, with the market closed on Thursday and a 1 p.m. ET close on Friday in honor of the holiday. Remember that in short, holiday weeks, markets are often thinly traded, potentially setting up volatility. Investors should consider using more caution than usual. 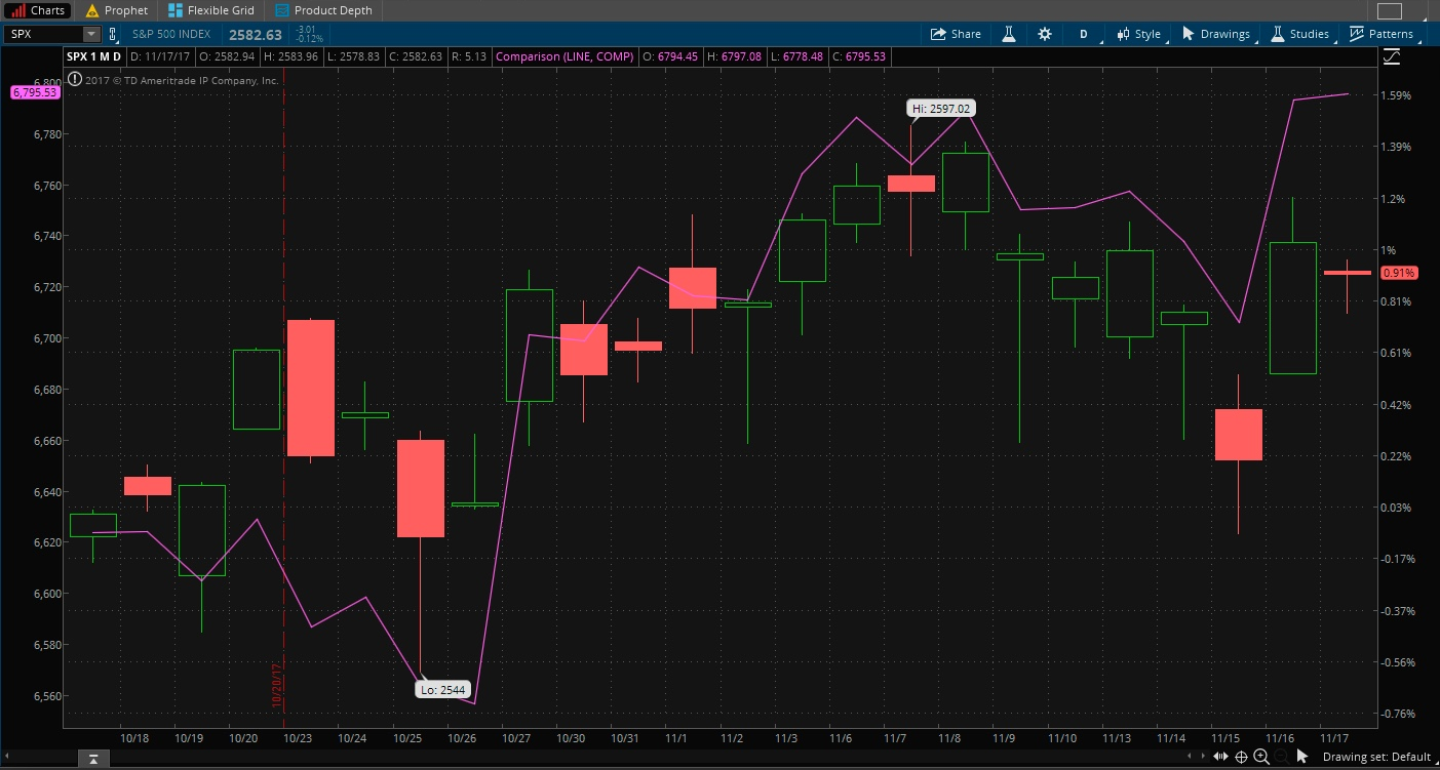 After steadily rising earlier this quarter, the S&P 500 (SPX) and the Nasdaq (COMP, represented by the purple line in this one-month chart), have developed a noticeably choppier tone over the last week or two. The question is whether holiday shopping statistics might provide a new catalyst. Data source: Nasdaq, Standard & Poor’s. Chart source: The thinkorswim® platform from TD Ameritrade. For illustrative purposes only. Past performance does not guarantee future results.


Ready To Shop? A highlight this coming week is Black Friday, and recent data hint that shoppers might be ready. A record 195.9 million consumers now have access to revolving credit such as bank-issued and private label credit cards, TransUnion (NYSE: TRU) said in a recent press release. This is the highest level of revolving credit access since TRU began measuring the variable and is greater than the 192.6 million consumers who had access to such credit products in Q3 2016. “The third quarter of 2017 exhibited a lending market that continued to operate in a stable manner, with consumers continuing to gain access to credit and take advantage of that access,” said Ezra Becker, senior vice president and head of research and consulting for TransUnion, in the press release. “However, we are beginning to see a slowdown in originations, which may be a signal of saturation in the lower-risk credit tiers and some pull-back in lender risk appetite in the higher-risk tiers.” Still, Becker predicted a “robust holiday shopping season.”


Strong Signal From Housing Numbers: Friday’s new home starts and building permits data for October both shot up from the previous month, easily beating Wall Street analysts’ expectations. Starts totaled 1.29 million, up from a revised 1.135 million in September and compared with analysts’ consensus projection for 1.198 million. Permits hit 1.297 million, up from a revised 1.225 million the prior month and above expectations for 1.243 million. The strength could have been fueled in part by post-hurricane construction, Briefing.com said. Multi-unit starts increased the most but single-family starts also rose. In sum, the report could provide some positive input for Q4 gross domestic product (GDP).

Just In – Final Q3 Earnings Estimates: With Q3 earnings season pretty much wrapped up, it looks like the average earnings per share gain for S&P 500 firms was a solid 6.9 percent, according to research firm CFRA. That’s up from the firm’s original 5 percent estimate before earnings began, and represents the 23rd consecutive quarter in which actual EPS growth exceeded estimates. All 11 sectors are now projected to post positive full-year changes for 2017 and 2018, CFRA added. Also, CFRA sees S&P 500 revenues rising 6.5 percent in Q4 and 6.7 percent for the full year and 3 percent GDP growth in Q4.