In the previous article on bitcoin mining, we already discussed many aspects of energy consumption by the industry. We also compared the usage with other sectors and energy consumers from around the globe based on the most recent data.

This article will focus on the future of energy usage in crypto mining and how it can contribute to the global transition toward sustainable energy usage.

What Are Green Energy And Renewable Energy?

The terms Green energy and Renewable energy are often used interchangeably despite having some technical differences.

Green energy is a part of renewable energy originating from sources that have the highest environment-friendly potentials.

The following illustration by the U.S. Environmental Protection Agency shows green energy as a subset of renewable energy sources.

Advantages Of Green Or Renewable Energy From Bitcoin Miners’ Perspective
The most significant advantage of green energy is its practically unlimited availability. The global supply of fossil fuels is likely to end by 2060, according to Octopus Energy estimations. However, green sources such as wind, solar, geothermal, or hydropower will continue to be there for as long as the earth sustains. As bitcoin mining is expected to continue until 2140, miners must rely on energy sources that are sustainable for such a long time according to its protocol.  Green energy’s other huge benefit is that it saves the environment. The most significant criticism regarding bitcoin mining is the environmental concerns. It stirred around the world when Elon Musk declared to stop accepting bitcoin payments for Tesla cars citing the harmful effects of the environmental degradation caused by the mining operations. CO2e or carbon dioxide equivalent, which is carbon dioxide emission for generating per kWh of electricity, is an excellent indicator to compare the environmental impact of different energy sources.  The following illustration shows that natural gas emits 250 to 1000 grams of CO2 for producing 1 kWh of electricity. In contrast, the CO2e for wind energy is only around 9-18 grams through its lifecycle. 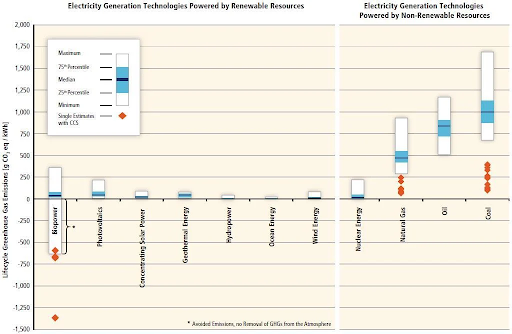 
So the bitcoin mining industry may quickly capitalize on this factor as it will propel a significant positive vibe.

Stability of price is another positive thing about green energy consumption that favors mining sustainability in financial terms.

As renewable energy resources are not limited in supply, it is not susceptible to sudden price swings.

More interestingly, with a continuously increasing global production output and more adoption across industries, the price of natural energy sources has been declining steadily over time.


As a result, the entire renewable energy industry has achieved more efficiency, higher production capacity, and economies of scale over time. The following graph demonstrates how the production costs for energy sources such as solar photovoltaics (PV), concentrating solar power (CSP), and wind energy have fallen from 2010 to 2021. 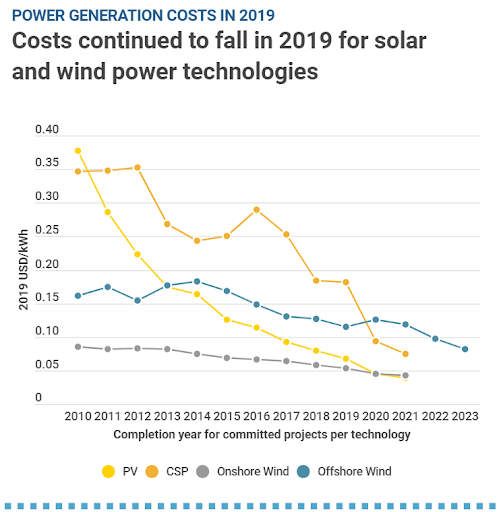 
Additionally, the installation cost has also been falling over time. According to IRENA, with the investment of USD 1 million in 2010, it was possible to set up a PV electricity plant with a capacity of 213 kW.

However, the same amount of investment can now set up a plant of 1,005 kW, thanks to the increasing efficiency and technological upgrades.

This characteristic can be highly beneficial for the bitcoin mining industry for being economically sustainable and attractive for investors.


A new committee known as Bitcoin Mining Council was formed in May 2021 to promote and report sustainable energy usage by bitcoin members.

One of the council’s objectives is to regularly publish energy usage statistics by the global bitcoin mining sector.

According to a recent report, bitcoin miners have already been using 56% of their total electricity through sustainable or renewable sources.

For the members of the council, the usage is even better, 67.6%.

The following illustration compares the energy mix used by bitcoin miners with different countries and regions of the world.

Promisingly, the mix has been improving very rapidly in recent months.

It is more evident from the following chart that shows that in the first quarter of 2021, the combination was 36.8% that increased by 52.2% to reach an impressive 56% within the next quarter.


It shows the sincere intention of the bitcoin miners to transit toward more and more sustainable power sources. 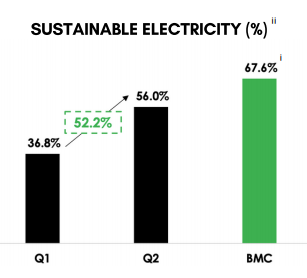 Green Technology With Higher Efficiency: The Future Of Bitcoin Mining

Bitcoin works on PoW (Proof-of-Work) chain, whereas there is a gradual shift toward adopting a more energy-efficient PoS (Proof-of-Stake) method in recent years.


Ethererum 2.0, for instance, is in the process of shifting toward PoS from PoW. However, the whitepaper of bitcoin suggests that bitcoin will remain PoW-based through the foreseeable future.

However, some recent technological advancements regarding data center management could help improve the efficiency of bitcoin mining.

Will It Be Economically Feasible For Bitcoin Miners?

According to Digiconomist, as of 2021, the total annual income for bitcoin miners is approximately USD 9,874,580,767, which is the total value of mining rewards.

A fixed rate of 5 cents per kWh is an assumed electricity price. So the calculation shows that a miner has to spend 68.42% of his total income to buy electricity for mining.
The figures indicate that if the miners want to achieve higher efficiency in production cost, the key is to find electricity at a lower price.

And as mentioned above, with a steadily declining cost of renewable energy globally, it can be an excellent opportunity for miners.

According to IRENA, 56% of the green energy added in 2019 offers electricity at a lower cost compared to the coal-based power plants that came into operation at the same time.


Sustainable Mining Operation And Its Effect On Global Energy Economy

With a fund of USD 10 million, the project aimed to support companies who would contribute to the bitcoin mining ecosystem’s green energy usage.

BCEI published a white paper in April 2021 highlighting the excellent prospects of the bitcoin mining industry in the future.


Bitcoin mining can act as a complementary technology for sustainable energy management as the mining industry is a unique purchaser of electricity. The uniqueness comes from the highly flexible nature of the sector in terms of payment method, location indifference, and electrical load distribution.  Despite being the least expensive energy sources, solar and wind energy have bottlenecks caused by their inability to supply uninterrupted power. Bitcoin miners can address this issue by consuming surplus electricity when production is abundant on a sunny or windy day. This flexibility in load distribution will reduce the cost even further. 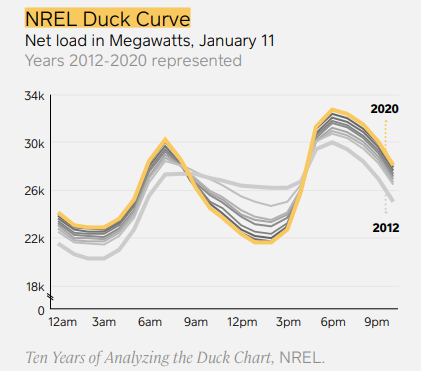 According to the chart above, electricity demands widely vary depending on the time of the day. Combining their energy sources with traditional energy and renewable energy, bitcoin miners can consume this excess electricity during the off-peak hours. At the same time, the mining industry may also supply the excess electricity they could produce from traditional sources to the grid.


Machine learning and artificial intelligence can rapidly improve the thermal efficiency of data centers through intelligent cooling.  Locating data centers in colder environments will help reduce the energy usage for thermal management. Also, the greater availability of renewable energy sources in the area will help mitigate the carbon footprint. Intelligent data centers will help with effortless load shifting during battery shortages by combining renewable and traditional sources.  Sector coupling can also leverage the bitcoin miners through which they will be able to supply the waste hit to the local areas where it is needed. Bitcoin mining can act as a complementary technology for sustainable energy management as the mining industry is a unique purchaser of electricity. The uniqueness comes from the highly flexible nature of the sector in terms of payment method, location indifference, and electrical load distribution. Despite being the least expensive energy sources, solar and wind energy have bottlenecks caused by their inability to supply uninterrupted power. Bitcoin miners can address this issue by consuming surplus electricity when production is abundant on a sunny or windy day. This flexibility in load distribution will reduce the cost even further. Many renewable energy projects are easier to build in rural areas away from the city. However, it is not easy and cost-effective to store and transport the energy back to the cities. As bitcoin miners have no location preference and can set up a mining rig anywhere with a good internet connection, they can be excellent consumers of locally produced electricity. For example, only 7% of the total electricity production in the U.S. comes from hydro sources. But surprisingly, that small percentage contributes to 62% of the mining energy used for hashing facilities, according to the University of Cambridge. Therefore, it is evident from the discussion, recent progress, and decarbonization that the bitcoin mining industry has the full potential to rely 100% on green and sustainable sources of energy. So the mining industry is not acting as a roadblock here. Instead, it is propelling the global renewable energy economy significantly.