Diversified Restaurant Holdings (NASDAQ:SAUC) is the largest franchisee of Buffalo Wild Wings (NASDAQ:BWLD). It has been exactly a year since Diversified Restaurant Holdings (DRH) spun off its underperforming segment, Bagger Dave’s (OTCQB:BDVB) and became a pure-play Buffalo Wild Wings (BWW) holding company with 65 locations in 5 states. Bagger Dave’s was a drag on DRH’s profits, and the spin-off significantly reduces the risk. David Burke, who previously served as CFO, was named CEO in early 2016. He has given guidance on a 3-year plan that will maximize cash flow to pay down debt. Unfortunately, the company was hit with numerous headwinds in 2017 such as rapidly rising wing prices and declining traffic. In Q4, wing prices have begun to stabilize, and brand revitalization from Roark Capital should improve traffic in 2018. For investors that can see past the temporary headwinds, the stock is very cheap.


In 2015, DRH acquired 18 locations in a fullylevered $54 million acquisition. At the time, it was 40% of DRH’s size. The company managed to significantly scale the business and delever administration costs at a low rate of capital with little cash. Value creation at these locations is a result of multiple expansion, debt to equity conversion, and increased cash flow. The value proposition has not changed, but the temporary headwinds have caused the stock to fall significantly from its peak in May 2017.


Roark Capital Group, a private equity firm based in Atlanta, recently made an acquisition of BWLD for $157/share, at roughly 11x EBITDA (Source: CNBC News). Buffalo Wild Wings will be a subsidiary of Arby’s, with Paul Brown remaining CEO of the combined company (Source: Business Insider). Roark Capital has invested in many of America’s popular brands across industries – car washes, waste management, pet shops, fitness centers, and restaurants (Source: Star Tribune). The group turned around the Arby’s franchise due to the leadership of Brown. Roark also recently exited Wingstop after improving its operations and revitalizing the brand. Arby’s CEO and Roark’s experience with Wingstop should prove to help not only the franchisor but also the franchisees, like DRH.

Before Paul Brown took over as CEO in 2013, the Arby’s franchise was suffering, and sales had been in a downward spiral for years. In 2010, a JPMorgan analyst said, “Arby’s performance is amongst the worst in modern restaurant history” (Source: Daily News). After Paul took over, Arby’s has grown same-store sales consistently for over 3 years. Arby’s restaurant-level revenue increased 25% on average under Brown’s leadership (Source: Forbes). If all of BWW locations grew 25% in 4 years, it would be an $8m EBITDA impact for SAUC. Arby’s CEO repositioned the brand with innovative marketing and higher-margin, traffic-driving menu changes. Brown has helped turn Arby’s into one of the best chain restaurants in the industry (Source: Business Insider). The Roark Capital influence will be positive for the BWW brand as a whole and will drive growth through innovative marketing strategies and menu changes.

When Roark acquired Wingstop in 2010, the group set four pillars to increase the chains overall ROI: top-line sales, operating costs, development cost, and leverage. If Roark approaches BWLD in a similar way, there will be a benefit for franchisees like DRH from the first two pillars. The first pillar, to increase top-line sales, was achieved by increasing traffic through marketing strategy and menu changes. The launch of new products, such as Wingstop’s Glider Chicken Sandwich, was very successful in driving traffic and increasing sales. The concept worked on further developing Wingstop’s social media and marketing strategy. Menu editions, marketing improvements, and brand repositioning were key to improving the brand image. The second pillar, development cost, could also help both BWW and DRH. In 2010, wing prices were soaring, and Roark reviewed strategies to make the menu more stable. The company moved toward the increased use of boneless wings to offset the past several years of high bone-in chicken wing costs. Boneless wings are significantly cheaper and less volatile than traditional wings. Adding and promoting new menu items that use boneless wings would help stabilize margins at DRH. Roark’s experience running Wingstop should translate well with the Buffalo Wild Wings franchise (Source: Fast Casual).

Diversified Restaurant Holdings is a superb operator of Buffalo Wild Wing’s locations. DRH has better margins than the BWW, net of a 5% royalty and a 3% national advertising (Company Filings). This shows DRH is focused on reducing SG&A and expanding margins. Margins were heavily impacted by wing prices hitting record highs this year. Food and packaging cost increased this year to 29.5% of sales, up from 27% of sales in 2016 (Company Q3 Presentation). Chicken wings cost were $2.16 per pound on average in the third quarter, up 26% from the $1.72 average a year ago (Source: Urner Barry Comtell). Chicken wing prices have fallen back in Q4 below their 5-year average, $1.65 a pound. If chicken wings prices continue to stay in this range, on average, it will add ~$4-5m in EBITDA through margin expansion. At an 8x multiple, $5m in $40m more in equity value compared with its current market cap of $35m. Chicken wings are going to remain popular, and supply will catch up with demand. 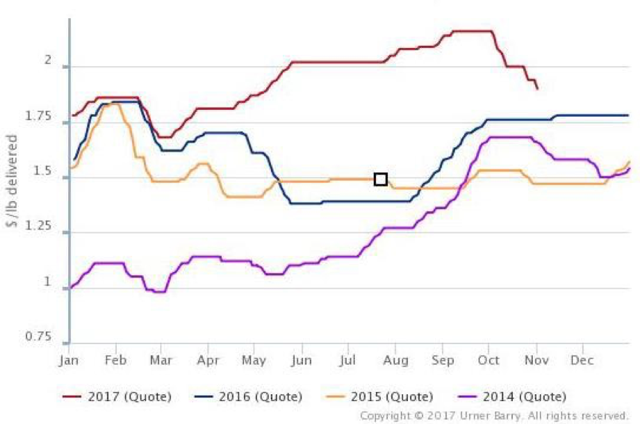 Management stated the following in a presentation given at the Dougherty Conference in September: “To combat the impact of inflationary traditional wing costs, DRH implemented a number of high-value initiatives to drive down the cost of sales. DRH is targeting savings in the $3-4 million range (annualized), including the following”:

The loyalty program will not make or break the success of BWW as a brand, but it shouldn’t be counted out as a non-contributor for DRH. Think of the success of Starbucks (NASDAQ:SBUX) or Panera’s loyalty program and how it improved their business as a result. Loyalty checks are higher than regular checks and often drive traffic as the app serves as a constant reminder to the consumer. As of Q3, loyalty checks were 17% higher than regular checks (Company Q3 Presentation). DRH’s loyalty checks represented 13% of total checks in Q3, and the company is targeting a 20% loyalty attachment rate by the end of 2017. DRH has been running the program for just over a year and has made significant progress. Loyalty checks should make up 50% sales mix by the end of 2018. Since loyalty checks are 17% higher than regular checks, at 50% loyalty attachment rate, DRH could add $15m in sales from the program alone. 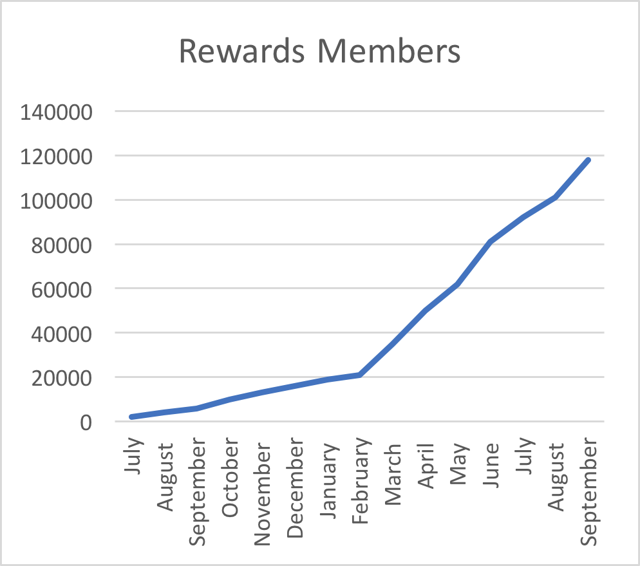 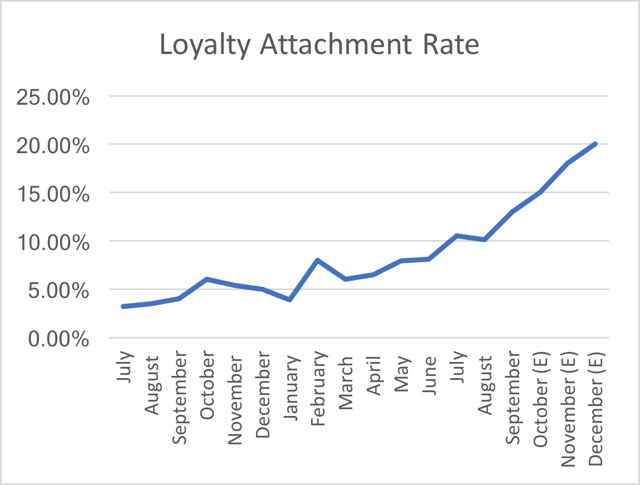 DRH’s stock price has declined approximately 80% in the past 5 years to $1.35/share. The company has grown its restaurant holdings from 19 to 64 locations using their scale to increase cash flow, convert debt to equity, and as a result, expand the multiple. The following assumptions were not inputted in expected revenue or margin but influenced the probabilities of each scenario occurring: $2m EBITDA contribution from the loyalty program, $4m savings from menu changes, and $4m contribution from wing prices stabilizing. The bull case is more probable, given the contributions from stabilizations in commodity prices and management initiatives. If all of this occurred simultaneously, EBITDA would be closer to $30m. The most likely scenario, the base case, is based on the assumption that these savings could be offset by an unknown factor such as declining traffic. EBITDA should remain flat at ~$22.5m for the next several years, meaning FCF should remain at around $12-15m during that period. Management has clearly stated that its top priority is to reduce leverage. This would get the company near its leverage target of 3.5x EBITDA by the end of FY19, which is a much better position for the company that would lead to multiple expansion. It is reasonable to expect the multiple will expand if the company is able to comp positive in 2018 against softer 2017 results. Additionally, as debt is reduced, the equity will carry less risk of bankruptcy. Share price is calculated by taking an 8x EV/EBITDA multiple, which is where it trades at now; although as the company pays off debt and returns to positive comps, it should demand a higher multiple. The average multiple for similar companies is 10.2x (see references). Using conservative estimates and multiple projections, the stock would reach just over $4 in the next 3 years, 3.5x higher than where it trades today.

Calculations Based on 26.9m Shares Outstanding


DRH is ~5x levered, and management is targeting 3-3.5x leverage. Management is aware of the risks associated with their high amount of leverage and is committed to paying it down. Management mentioned in the most recent call that it was looking at strategic alternatives, but given its current position, paying down debt will create the most value.

Diversified Restaurant Holdings is a pure-play Buffalo Wild Wings franchisee that is significantly undervalued. The company’s current strategy and position are being overlooked due to temporary headwinds. The Roark Capital influence on the Buffalo Wild Wings franchise will only improve brand image and marketing strategy. Wing prices were significantly higher than their mean in 2017, which impacted margins negatively. Prices have begun to revert back to their long-term average and should add ~$4m in EBITDA. Additionally, management expects to save ~$4m from initiatives, and the rewards program has the potential to add $2m through increased check size by next year. Conservatively, EBITDA should remain flat over the next three years with the majority of free cash flow being used to pay down debt. As a result, the enterprise value should be significantly reduced, which will be reflected in the stock price; the stock is a triple in the next three years. 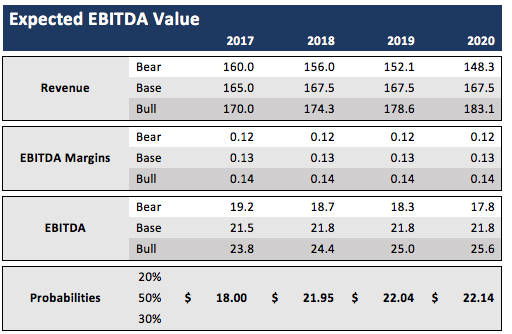 Disclosure: I am/we are long SAUC.

About this article:ExpandAuthor payment: $35 + $0.01/page view. Authors of PRO articles receive a minimum guaranteed payment of $150-500.Tagged: Investing Ideas, Long Ideas, Services, RestaurantsWant to share your opinion on this article? Add a comment.Disagree with this article? Submit your own.To report a factual error in this article, click here