The German economy expanded at the fastest pace in six years in 2017, although growth was slightly weaker than analysts forecast.

Gross domestic product rose 2.2 percent after a gain of 1.9 percent in 2016, the Federal Statistics Office said on Thursday at a press conference in Berlin. That compares with a 2.3 percent median estimate in a Bloomberg survey of economists. The government had a fiscal surplus of 1.2 percent of GDP last year, the most since the country’s reunification. 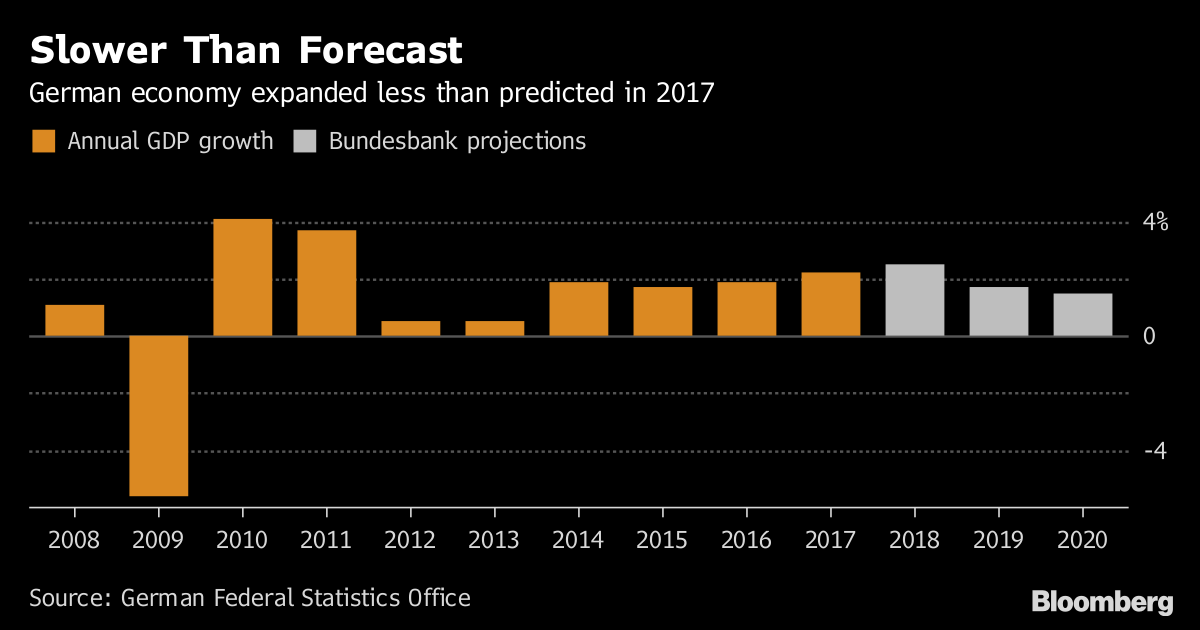 Germany, Europe’s largest economy and growth engine, is the first of the world’s biggest developed nations to publish 2017 data. Recent reports from company surveys to industrial production signaled a vibrant performance in the final quarter, and strong business sentiment and order flows may boost prospects for 2018.

“The key factor that changed in 2017 was that investments really took off,” said Stefan Kipar, an economist at Bayerische Landesbank in Munich. Much speaks in favor of that trend continuing, he said, arguing that trade may also pick up in the year ahead.

Companies’ investment plans went undeterred by geopolitical uncertainties ranging from heated elections in France and the Netherlands, as well as concerns over protectionist policies emanating from the U.S. While economists initially foresaw annual German GDP increasing 1.4 percent at the start of the year, the consensus forecast was revised up at least eight times throughout the course of 2017.

One factor helping businesses was support from the European Central Bank, which kept borrowing costs at record lows. Household consumption in Germany also benefited from continuously rising employment, which has pushed the jobless rate to the lowest since the country’s reunification just over a quarter of a century ago.

“What surprised everyone was that all components performed better than expected,” said Carsten Brzeski, an economist at ING-DiBa AG in Frankfurt. “There was a lot of concern at the end of 2016 about trade wars and a wave of protectionism — none of that came, and quite to the contrary, we saw world trade blooming and a rebound in demand from the euro zone.”

The Bundesbank predicted in December that the German economy continued its “strong upward trend” in the final quarter of 2017 due to robust manufacturing momentum and the “excellent situation in the labor market.”

The statistics office will publish its quarterly GDP report on Feb. 14.

— With assistance by Andre Tartar, and Kristian Siedenburg