The last 12 months have been a roller coaster for General Electric (NYSE:GE) investors. The profitability of GE’s largest business unit (GE Power) has plunged, while bad decisions made years ago by the company’s finance subsidiary are finally coming back to haunt it.

CEO John Flannery has reacted by promising to cut costs and radically simplify GE by selling or spinning off non-core businesses. The planned asset sales will have the secondary benefit of shoring up GE’s weak balance sheet.

On Monday, General Electric announced its biggest divestiture yet. The company is set to merge its transportation business, which primarily builds railroad locomotives, with Westinghouse Air Brake Technologies (NYSE:WAB) — better known as Wabtec. This deal will generate a sizable cash windfall, and GE shareholders will also receive a substantial stake in Wabtec.

Another deal gets signed up

Rumors of a potential merger between GE Transportation and Wabtec began circulating last month, around the time of GE’s first-quarter earnings report.

Under the deal that was recently finalized, General Electric will sell a portion of the assets of its transportation business to Wabtec for $2.9 billion. Most of what’s left in the transportation segment will then be spun off to GE shareholders and immediately merged with Wabtec. The sale and merger are expected to close in early 2019. 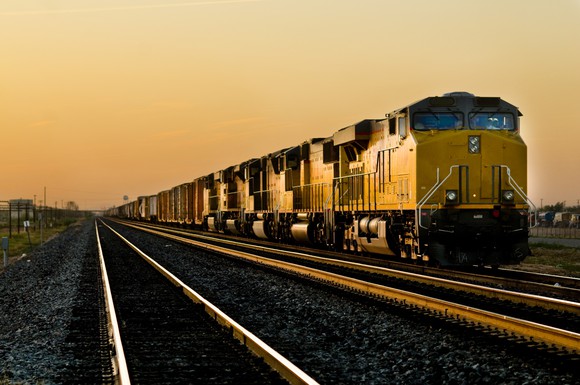 The total deal is valued at $11.1 billion based on Wabtec’s April 19 stock price, including tax benefits that will be realized as part of the combination. Indeed, tax considerations were a major reason for the complicated structure of this deal. GE’s transportation segment is more than 100 years old, so the company would have incurred a huge tax bill from selling it outright.

This is a great price for a turnaround business

While the official value of this deal is $11.1 billion, Wabtec stock has rallied more than 15% since the merger rumors started trickling out a month ago. Based on Wabtec’s current market cap of $9.4 billion, GE and its shareholders will actually receive proceeds of $12.3 billion.

This is a substantial chunk of change for a cyclical business that is currently mired in a slump. GE Transportation’s revenue fell 11% year over year in 2017, causing segment profit to tumble 23% to $824 million. At the company’s investor day last November, General Electric executives projected a further 15% organic revenue decline for the transportation segment in 2018, leading to a 25% plunge in segment profit.

Based on the transportation segment’s implied 2018 segment profit of approximately $618 million, the Wabtec deal values it at 20 times operating income. For comparison, the segment’s value was recently estimated at $6.8 billion by Barclays analysts.

Thus, GE and its shareholders are getting a very good price for the transportation segment. This should help ease investor worries that the company might settle for fire-sale prices in order to meet its asset sale target.

General Electric paid down $8.8 billion of debt last quarter using excess cash. It will be able to continue reducing its debt load over the next year or two as the divestitures it has announced in the past year are completed. Just in the next few months, GE is set to receive nearly $3 billion from selling pieces of its power and healthcare segments.

The Wabtec deal will bring in another $2.9 billion in early 2019. Furthermore, GE is required to sell the 9.9% stake it will receive in the new Wabtec within three years. Based on the current Wabtec stock price, that could bring in nearly $2 billion of additional proceeds.

GE is also marketing its lighting segment and its industrial gas engine business to potential buyers. The latter business could fetch upwards of $3 billion in a sale. Lastly, the company will be allowed to sell its 62.5% stake in Baker Hughes, a GE Company — currently worth nearly $26 billion — beginning next July.

On paper, General Electric’s balance sheet still looks like a mess. However, over the next two years or so, GE should be able to reduce its debt and pension liabilities substantially. If the aviation and healthcare segments continue to grow as expected and the power business shows signs of improvement, General Electric stock could surge 50% or more between now and 2020.