Europe could be in for a cold, expensive winter.

Energy markets were shocked Tuesday by the closure of a pipeline in the North Sea and a major explosion at a facility in Austria that helps move natural gas from Russia.

The price of both crude oil and natural gas spiked as investors worried that the vital pieces of infrastructure could be out of commission for weeks, choking off supplies.

Italy, which sources 30% of its gas via the pipeline in Austria, declared a state of emergency.

The explosion at the gas facility in Baumgarten, near Austria’s border with Slovakia, killed one person and injured 18.

The terminal’s operator, Gas Connect Austria, said it had closed the facility and suspended the transit of natural gas through Austria to southern Europe.

Massimo Di-Odoardo, an analyst at Wood Mackenzie, said Europe has enough natural gas in storage to cover its immediate needs.

“But if the flows through don’t resume soon and if the cold snap continues, prices will remain high through the rest of the winter,” he warned. 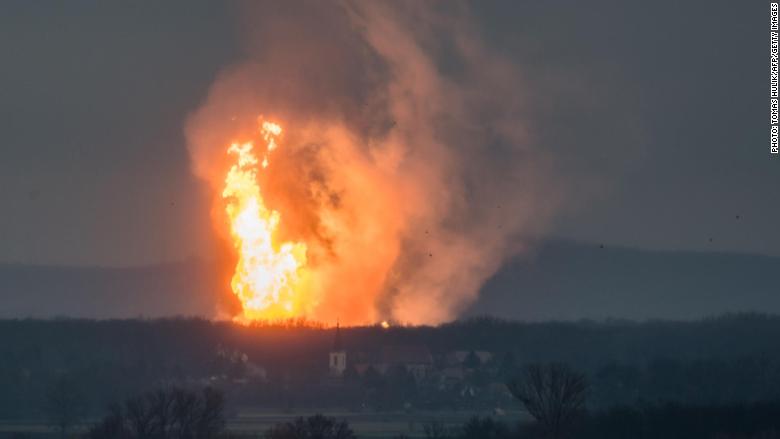 The explosion in Austria was caught on film.

Meanwhile, another problem was developing on the other side of the continent.

INEOS, which owns the 235-mile Forties Pipeline System in the North Sea, said that it was shutting down a pipeline because a leak discovered on December 6 had gotten worse.

The network carries almost 40% of the North Sea’s oil and gas output.

“This is an oil pipeline, however the closure will result in some platforms producing both oil and gas to shut,” said Ben Spry, head of risk management services at npower. He said the outage is likely to last “for weeks rather than days.”

The outage is likely to cause a shortfall of natural gas supply in the U.K. of around 10% of average winter demand, according to Wood Mackenzie.

Natural gas futures spiked as much as 17% in London, according to data from ICE Futures.

Europe has seen a cold start to the winter so far, with severe weather hitting the U.K. and much of the mainland over the weekend and early this week. Demand for gas in the U.K. was already up 18% because of the weather.

The International Energy Agency said it was closely monitoring the situation in the North Sea.

Energy security is a key issue for the European Union, which relies on Russia for roughly a third of its natural gas.

The EU has tried to reduce its dependence on Russian gas. It has been improving pipeline connections between individual member states and building up storage, and it has started buying more gas from other countries.

Since 2014, two liquefied natural gas import terminals have opened in Poland and Lithuania, making the region open to imports from elsewhere.