Zoetis Inc (NYSE:ZTS) – Equities research analysts at Gabelli cut their FY2019 earnings per share (EPS) estimates for Zoetis in a report released on Friday, February 15th. Gabelli analyst K. Kedra now forecasts that the company will post earnings of $3.45 per share for the year, down from their prior forecast of $3.50. Gabelli also issued estimates for Zoetis’ FY2021 earnings at $4.40 EPS and FY2023 earnings at $5.30 EPS.

Zoetis (NYSE:ZTS) last posted its quarterly earnings data on Thursday, February 14th. The company reported $0.79 earnings per share (EPS) for the quarter, topping analysts’ consensus estimates of $0.77 by $0.02. Zoetis had a net margin of 20.35% and a return on equity of 75.51%. The company had revenue of $1.56 billion during the quarter, compared to the consensus estimate of $1.53 billion. During the same period in the previous year, the firm posted $0.69 EPS. The firm’s revenue was up 7.1% compared to the same quarter last year.

Zoetis declared that its Board of Directors has initiated a stock repurchase plan on Wednesday, December 12th that authorizes the company to buyback $2.00 billion in outstanding shares. This buyback authorization authorizes the company to reacquire up to 4.7% of its stock through open market purchases. Stock buyback plans are typically a sign that the company’s board of directors believes its shares are undervalued.

The firm also recently declared a quarterly dividend, which will be paid on Monday, June 3rd. Shareholders of record on Thursday, April 18th will be paid a $0.164 dividend. This represents a $0.66 annualized dividend and a yield of 0.69%. The ex-dividend date is Wednesday, April 17th. Zoetis’s dividend payout ratio is presently 27.50%.

Zoetis Inc discovers, develops, manufactures, and markets veterinary vaccines and medicines in the United States and internationally. It commercializes products primarily across species, including livestock, such as cattle, swine, poultry, fish, and sheep; and companion animals comprising dogs, cats, and horses. 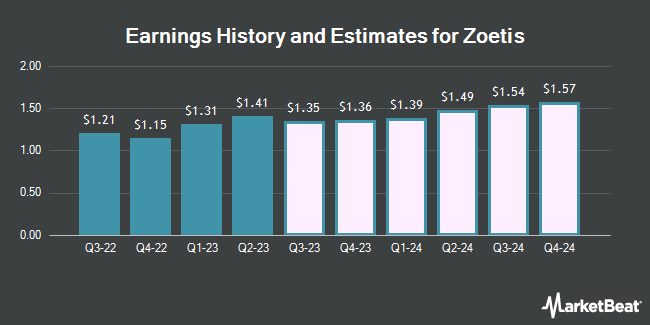