Big Oil’s fortunes are becoming tied more closely to natural gas than ever before.

Majors including Royal Dutch Shell Plc and BP Plc have boosted their proportion of gas output in recent years, helping them trim Exxon Mobil Corp.’s lead as the world’s most valuable oil company. Meanwhile Chevron Corp. added two giant Australian liquefied natural gas projects and Exxon is punching back with two major projects of its own, in Papua New Guinea and Mozambique.

Natural gas, seen as a clean bridge from coal to renewables, offers the best long-term demand growth among fossil fuels, particularly in its easy-to-transport liquefied form. At the same time, gas exploration comes with high upfront costs and long payback periods. How the majors handle those issues will become key drivers for success moving forward.

Industry heavyweights and officials from LNG trading nations — including Qatar, Japan, South Korea and Australia — will discuss global gas dynamics at the World Gas Conference in Washington D.C. starting Tuesday. The meeting is in the U.S. for the first time in 30 years, reflecting America’s shale-prodded gas clout. 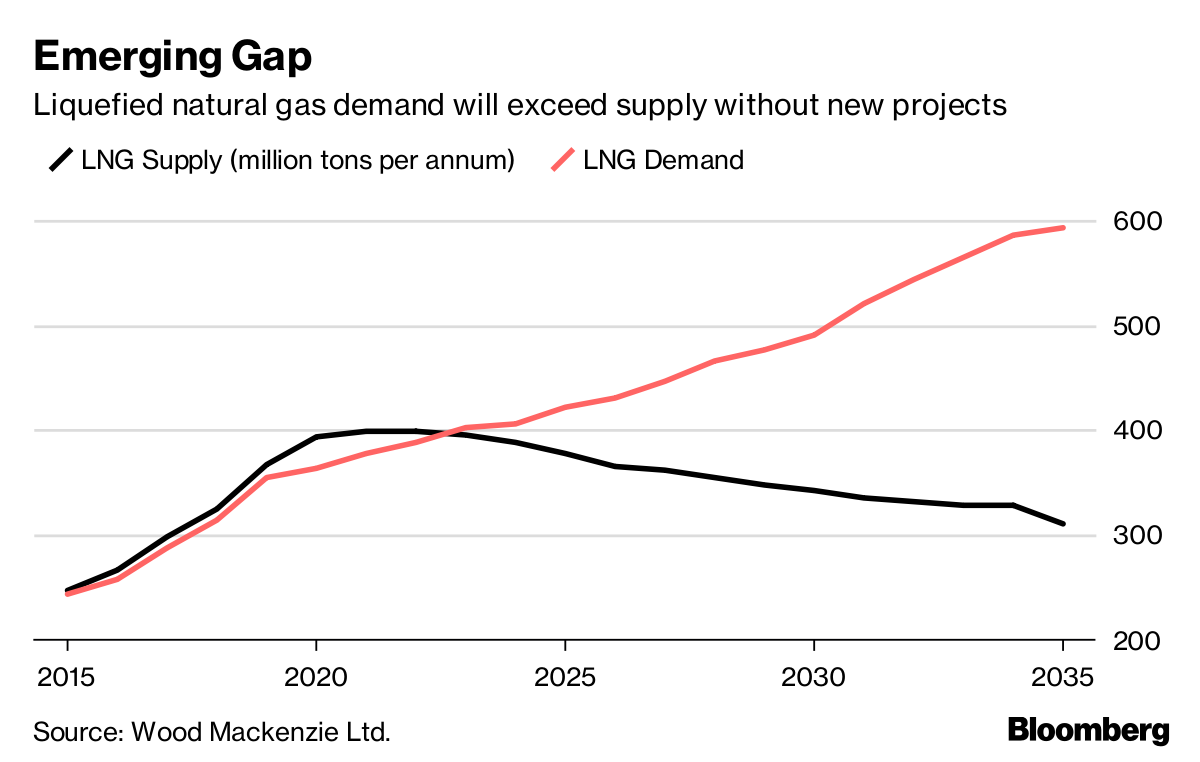 Gas emits about half the carbon dioxide as coal. That means it’s often seen as both a cleaner-burning alternative and a complement to wind and solar since it can produce electricity when the weather doesn’t cooperate. While the global LNG market is likely to be well supplied until 2022, demand will grow by 4 percent to 7 percent annually from 2023 on, according to Bloomberg New Energy Finance.

“In the fossil fuel area, it’s the one clear growth part of the business,” said Brian Youngberg, an analyst at Edward Jones & Co., based in St. Louis, Missouri.

With that growth, there’s a “potential shortage” looming in the mid-2020s that can only be overcome by decisions on new export projects over the next two years, BNEF said in a March report.

Shell’s purchase of BG Group for more than $50 billion in 2016, around the time when oil and gas prices bottomed, was primarily a purchase of gas assets. Shell’s LNG capability is now twice as big as its nearest competitor, according to Edward Jones. It has may have helped boost the Anglo-Dutch company’s market value, which is now about $53 billion less than Exxon, compared with about $150 billion before the deal.

“They’re getting a much higher rate of return because those assets were kind of left behind when everyone was solely focused on oil,” said Norm MacDonald, an Atlanta-based fund manager at Invesco Ltd., which has almost $1 billion under management, including Shell, BP and Chevron shares.

BP is also undergoing a gas expansion. By 2020, the British major expects to produce about 60 percent gas and 40 percent oil, a reversal from 2014 when it was the opposite. Last year, six of BP’s seven major projects were gas, Chief Financial Officer Brian Gilvary said in an interview.

Chevron shares have returned 40 percentage points more than Exxon over the past three years, mostly because Chevron’s giant Gorgon and Wheatstone LNG facilities in Australia came on stream, moving from a period of building and overspending to cash generation.

“Those assets were being risked quite heavily by the financial markets,” said Tom Ellacott, senior researcher at Wood Mackenzie Ltd. “Now they’re sunk costs and a lot of that risk has been unwound. They’re massive cash generators for the company.”

Exxon is not standing still. Big Oil’s worst-performer over the last five years, has made LNG a core part of its strategy to rebuild its upstream portfolio of assets, which is suffering from production declines.

The major sources of new LNG exports are likely to be from the U.S., Qatar, Mozambique and Papua New Guinea, BNEF said. Exxon has substantial gas operations in all of these countries, and the latter two are part of the company’s five key global projects for the next decade.

Exxon is less worried about competition and more about having the lowest cost assets that will survive the price-swings that effect the market over time, Chief Executive Officer Darren Woods said in an interview last month.

“Timing has never been perfect, so we’re going to find periods of supply and demand imbalance,” he said. “When you get into an imbalance our focus is in having the lowest cost supply of gas. PNG and Mozambique are great examples of that.”

Exxon currently produces about 55 percent oil and 45 percent gas. Woods doesn’t expect that to “dramatically shift” but it may change slightly as major projects come on stream.

While Exxon “is playing a bit of catch up,” its track record in building expensive facilities in high-risk locations is strong, according to Edward Jones’s Youngberg. “They have a very long-term outlook and LNG plays well into that.”

With the growth of renewable energy and the success of independents in shale oil production, Big Oil’s business model is being challenged. The major producers’ weighting in global equity indices is now at a 50-year low, Goldman Sachs Group Inc. said in a March report.

As such, LNG, with its high up-front costs, huge technical difficulty, and good growth rates, has become something of a safe place for the industry.

“The returns tend to be lower but once they’re on stream, the cash margins are generally very high,” said Wood Mackenzie’s Ellacott. “It’s increasingly becoming the domain of the majors.”