Consumer trust in self-driving cars has plummeted following high-profile roadway fatalities, with almost three-quarters of Americans now saying they are too afraid to ride in an autonomous vehicle, according to a new survey.

The survey by the American Automobile Association shows faith in robot rides has been shaken by two March incidents: A pedestrian in Arizona struck and killed by an Uber self-driving car and a fatality involving a Tesla Model X operating in semi-autonomous “Autopilot” mode. The fear-factor reported by 73 percent of those polled last month was up 10 points from late 2017 and nearly erased gains from the 78 percent afraid of automated cars early last year.

The biggest spike in anxiety comes from young adults, ages 20 to 37, with 64 percent now saying they’re afraid to ride in a self-driving car, up from 49 percent at the end of last year. The so-called millennial generation had previously been the most accepting of the new technology.

Share of U.S. drivers afraid to ride in a fully self-driving car by generation 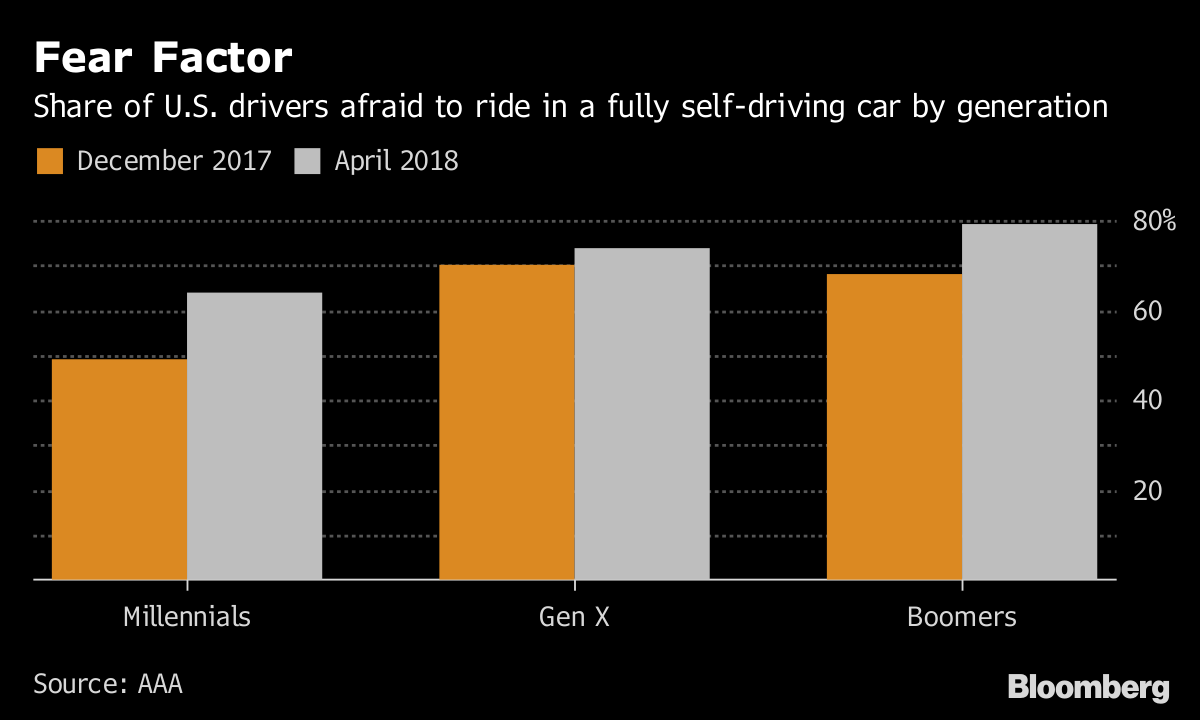 “Our results show any incident involving an autonomous vehicle is likely to shake consumer trust, which is a critical component to the widespread acceptance of autonomous vehicles,” Greg Brannon, AAA’s director of automotive engineering and industry relations, said in a statement. “This technology is relatively new and everyone is watching it closely.”

The creators of self-driving technology, such as Alphabet Inc.’s Waymo unit, have acknowledged they have a trust problem with the public and have actively worked to fix it. That is especially urgent as Waymo prepares to begin a driverless ride-hailing business in Arizona this year and General Motors Co. promises to follow next year in an as-yet-unspecified major American city. U.S. Transportation Secretary Elaine Chao has called on companies developing self-driving cars to educate the public on their safety.

Interest and anxiety is so high that Tesla crashes receive outsized attention as investors and safety advocates seek to learn whether Autopilot was in use. It isn’t clear yet if a fatal accident near San Francisco involved Autopilot; the National Transportation Safety Board isn’t investigating.

The latest AAA survey shows the public is deeply skeptical. Two-thirds of U.S. adults don’t even want to share the road with robots, saying that would feel less safe, according to the telephone survey 1,014 people conducted April 5-8. It has a margin of error of plus or minus 4 percent.

Women are the most fearful of the technology, with 83 percent saying they’re too afraid to ride in a self-driving car and 70 percent reporting they’d feel less safe sharing the road with them.

Yet consumers seem to understand the promise of automated driving, as 55 percent said they want semi-autonomous technology in the next vehicle they buy.

The promise of self-driving cars is that they will drastically reduce deaths on the highway by precisely piloting vehicles without human error, which regulators say is the cause of 94 percent of fatalities on American roads. But for that potential to be realized, consumers must become comfortable with robots taking the wheel.

“Despite their potential to make our roads safer in the long run, consumers have high expectations for safety,” Brannon said. “The industry will need to execute testing in the safest manner possible and ensure the motoring public is comfortable with the approach.”

— With assistance by Ryan Beene