After leading the market for much of 2018, tech high-flyers Facebook, Amazon, Netflix and Google parent Alphabet were hit hard in the fourth quarter, and apart from Netflix have lagged the S&P 500 this month.

While these four stocks have bounced meaningfully from their December lows, they are still a good distance from their all-time highs. Facebook and Amazon are in bear markets (off at least 20 percent from their recent highs), while Netflix and Alphabet are trading in correction territory (down at least 10 percent).

S&P Global’s Erin Gibbs believes this group might be out of favor for some time.

“We really see this as a rotation out of these mega-cap growth stocks into a wider distribution broader market, as well as value,” she said Thursday on CNBC’s “Trading Nation.” She notes that the expected growth rate of 8 percent for Alphabet and Amazon means they are “no longer growth names” but “still super pricey.” Given that, she said, “these are the kinds of stocks that might actually underperform for the rest of the year.”

One notable exception is Netflix, which she continues to “love” given its 50 percent-plus earnings per share growth expectations for the next three years. She also notes that the valuation, while still high at 90 times forward earnings, has “really come down below its three-year average, so it’s not overpriced when you’re looking at the type of growth.”

While Netflix is still in correction, shares have skyrocketed more than 50 percent from their December low, and the company has outpaced fellow FANGs as well as the broader market this year, clocking a gain of more than 33 percent.

Overall, Gibbs believes “the decline in a lot of these stocks is people just adjusting to the fact that they’re no longer such high flyers.”

Miller Tabak’s Matt Maley wouldn’t be a buyer of any of these stocks here, although he believes Alphabet looks the best from a technical perspective. He noted that the stock has broken back above its six-month trend line, and that even when it was falling, it still managed to hold the key $1,000 level. 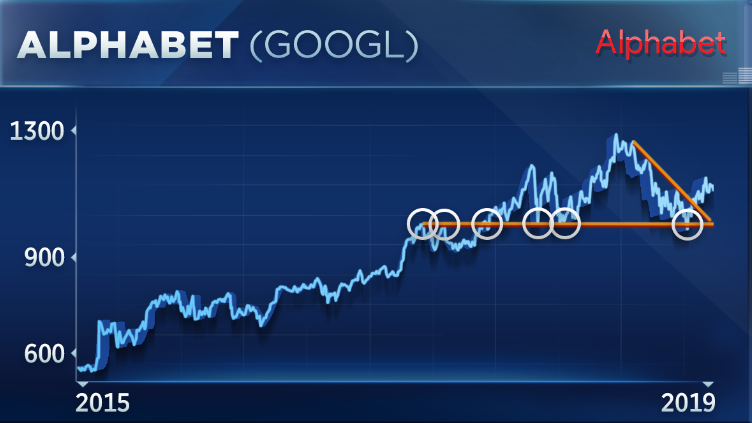 Like Gibbs, Maley believes the overall weakness in the tech space is a case of investors having been “loaded to the gills in these FANG names” and using recent weakness to rebalance their portfolios.

Maley foresees gains for FANG but says the high-flying days of yore may be gone for good.

“I think the [FANG names] will do fine, but I think they’ll only do as well as the rest of the market, because as money is coming out of the FANGs it’s being redistributed into other names like the semiconductor stocks,” he said.

Disclosure: S&P Global holds shares of Netflix and Alphabet in its advised portfolios.