Russia’s central bank is probably in need of a breather from monetary easing after U.S. sanctions provided a jolt.

With another cut in interest rates all but a done deal a month ago, sentiment turned sharply after the harshest U.S. penalties to date upended Russia’s currency and stocks. Only three of 36 analysts surveyed by Bloomberg now predict a decrease of a quarter-percentage point, while the rest say the benchmark will stay at 7.25 percent after five consecutive reductions. The decision is due at 1:30 p.m. in Moscow on Friday.

“The Bank of Russia may take pause this week to see what happens with the exchange rate and how it will affect inflation and inflation expectations, and how the increased uncertainty may impact business and consumer sentiment,” said Dmitry Polevoy, an economist at ING Groep NV in Moscow. 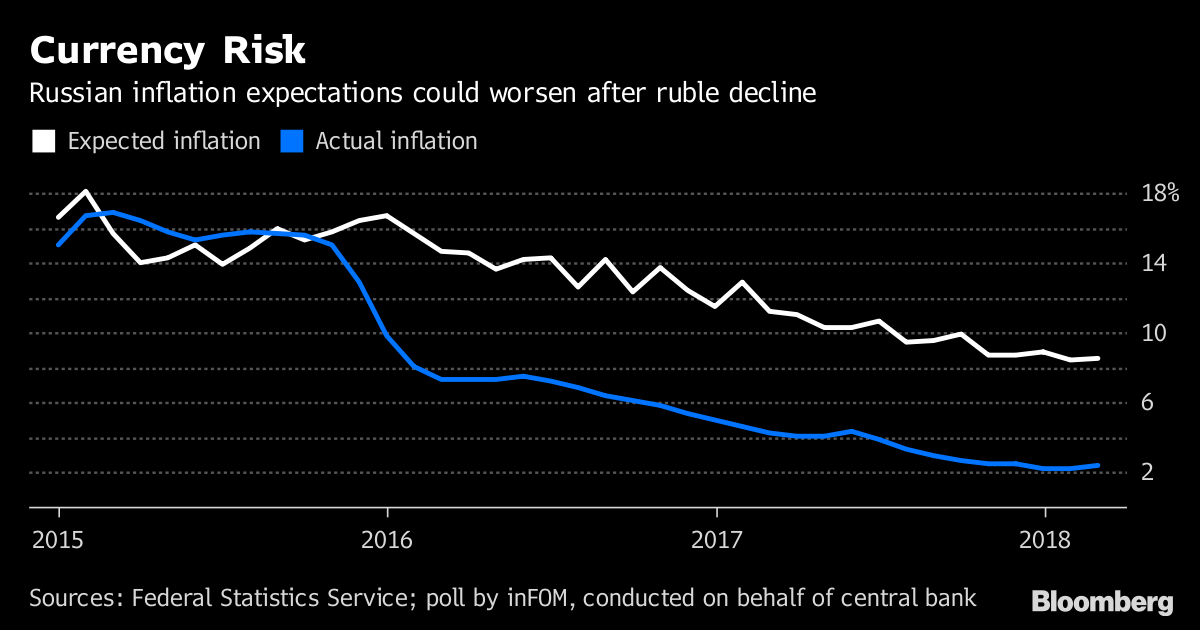 The market instability is a distraction for the central bank during a shift to looser policy, a month after it was envisioning faster cuts on the way to reaching its “neutral” range for rates. While a struggling recovery and inflation near a record low still warrant monetary easing, policy makers now have to contend with the impact of sanctions, which already sent the Russian currency to its steepest drop in almost three years.


The ruble has lost over 7 percent against the dollar this month, the worst performance in emerging markets. A depreciation of 10 percent may add a percentage point to inflation, according to the Russian central bank’s research and forecasting department.

Policy makers see no reason to back away from their promise to reduce the key rate to between 6 percent and 7 percent this year, but the trajectory of cuts may shift “slightly upward,” according to Bank of Russia First Deputy Governor Ksenia Yudaeva. While the pass-through to consumer prices has become less potent, meaning a weaker ruble may not have a big impact, the recent depreciation will “undoubtedly” affect inflation expectations, Yudaeva said in an interview last week.


Still, Russia’s biggest electronics retailer has already said it’s been warned by some European suppliers about planned price increases of up to 10 percent. The country’s largest automaker will boost prices in rubles by as much as 2 percent from May as the cost of imported car parts rose.

Inflation expectations of households for a year ahead, based on a survey conducted before the latest round of sanctions, fell to 7.8 percent in April, still more than triple the headline number in March. Consumer-price growth could climb toward the target of 4 percent in late 2018 and remain close to that level in 2019, according to the central bank.

“After volatility increased in the first half of April, it would be more reasonable for the regulator to take a pause,” said Michail Poddubsky, an analyst at Promsvyazbank PJSC, who forecasts no change. “It’s still difficult to fully assess the possible impact of higher volatility on inflation indicators.”

— With assistance by Zoya Shilova, and Ilya Khrennikov