If that sounds like it could be 1962, thats by design. Its all part of the DNA of the new TWA Hotel thats set to open next year at New Yorks John F. Kennedy International Airport.

Anchored around the landmark TWA Flight Center that opened in 1962 as the jet age dawned, the airport property is one of the most-anticipated hotel openings of 2019.

Its easy to see why.

The 512-room hotel will featuretwo new six-story towers that flank the old TWA terminals head house, an architectural masterpiece designed by Eero Saarinen. The terminal is in the process of being converted into a 200,000-square-foot lobby t the hotel claims will be the worlds largest.

The TWA Hotel will include six restaurants and eight bars. One of those, a cocktail bar, will be housed in a refurbished Lockheed Constellation aircraft that was a staple of the TWA fleet in the late 1950s and early 1960s.


People appreciate differentiation these days, says Tyler Morse, CEO of the MCR and Morse Development firms that arespearheading the redevelopment of the TWA site. Were kind of living in one giant Walgreens. Its a very homogeneous world.

The TWA Hotel, Morse says, will shake that up.

Already, enthusiasts both aviation and architectural have eagerly awaited each new detail to emerge about the iconic structures rebirth as a hotel.

Our phones are ringing off the hook, Morse says. People are wildly excited about this project.


I have not seen a new hotel attract the level of interest from travelers, aviation enthusiasts even the hotel industry itself as the TWA Hotel has, says Hartevdelt, who worked for now-defunct TWA in the 1980s.


A link has been posted to your Facebook feed. 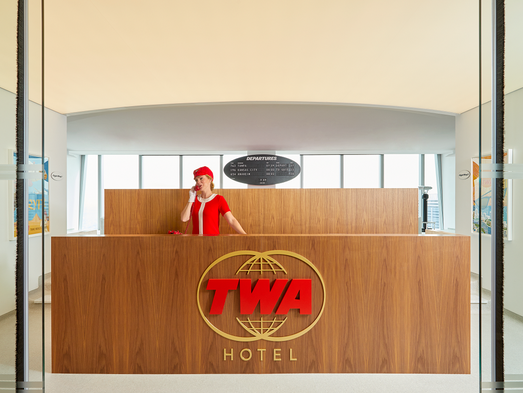 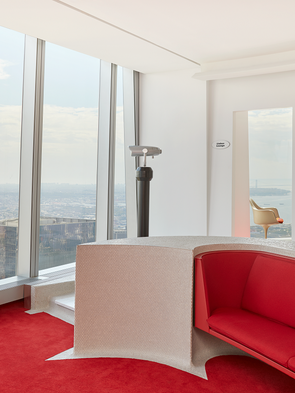 Upholstered banquettes and floors are installed with approximately 396,900 penny tiles from the TWA Flight Center. The floor is installed Tiles sourced by Ann Sacks; banquettes in Maharam fabric.  Emily GilbertFullscreen

A flight ‘hostess’ and pilot at the ticket counter front desk with airline beverage carts stocked with TaB, champagne and cocktails.  Emily GilbertFullscreen

A rotating collection of 51 original Jet Age David Klein prints commissioned by Howard Hughes are installed on the curved walls of the TWA lounge at 1WTC modeled after the curved architecture of the TWA Flight Center.  Emily GilbertFullscreen 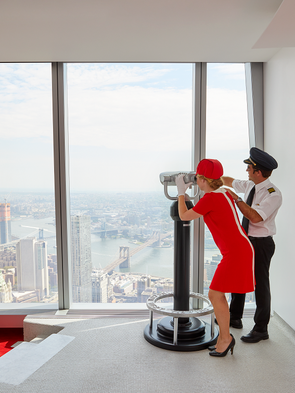 The telescope in the TWA lounge on the 86th floor points directly to the TWA Hotel at JFK International Airport.  Emily GilbertFullscreen 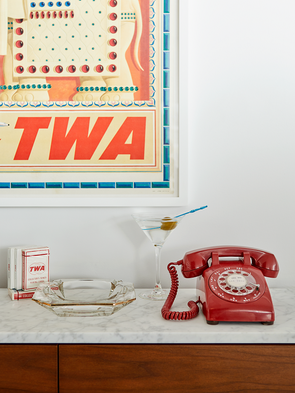 On display in the TWA lounge at 1WTC, The Cutout, a 1944 light blue gabardine TWA uniform by Hollywood fashion designer Howard Greer, featured triangular jacket flaps that could be unbuttoned to cover the TWA letters when flight hostesses wished to have a cigarette or cocktail off duty.  Emily GilbertFullscreen

On display in the TWA lounge at 1WTC is Pierre Balmains khaki ‘hostess’ uniform for TWA, worn in 1965. TWA was the first American airline to collaborate with an internationally celebrated fashion designer on its uniforms.  Emily GilbertFullscreen 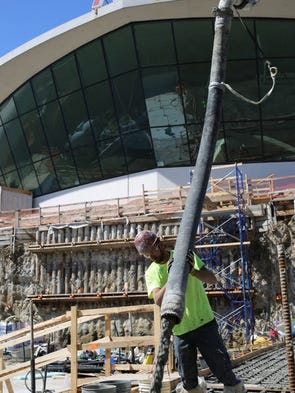 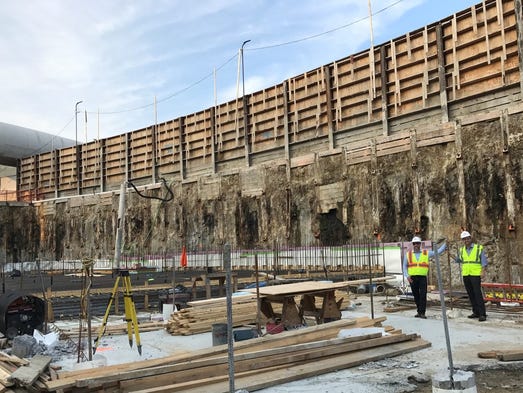 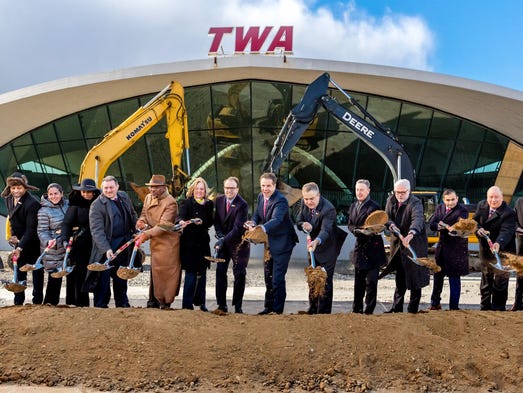 Concrete being poured for the new TWA Hotel.  MCRFullscreen

TWA Hotel under construction.  Max TouheyFullscreenLike this topic? You may also like these photo galleries:Replay


The TWA terminal was last used for flights in 2001and has been empty since. The building has since been declared a New York City landmark and was added to the National Register of Historic Places in 2005.

Already, visitors are intrigued by a rooftop pool that will afford views of the airfield not to mention the Constellation and the hotel-lobby conversion of the TWA FlightCenter that’snow in progress.

The TWA Hotel will formally unveil the look and layout of its standard rooms on Tuesday. USA TODAY got a sneak peek ahead of the official public unveiling.


Were bringing back the magic of 1962, Morse says, describing the property as an experiential hotel.

Everything were doing is unique and bespoke, Morse adds during a preview of the rooms at a JFK hangar where MCR has put together a top-secret full-scale mock-up of what will be a standard room at the hotel.

The standard rooms are on the small side, averaging 325 square feet. Forty-four of the hotels rooms will be larger suites, with the biggest topping out at around 1,200 square feet. All will include aesthetics that are sure to appeal to aviation and design buffs.


They’re fronted withfloor-to-ceiling windows; most afford guests views of either flight activity on the airfield or a panorama of the TWA Flight Center itself.

“You can walk right up to the window and watch the planes take off and land,” Morse says of the airfield-facing rooms.

Even the hotel beds are positioned so that guest will fall asleep with a view out the window.

When you wake up, you see the airfield,” Morse says, tipping his hat to aviation enthusiasts.”If youre an ‘avgeek,’ this is pretty cool.” 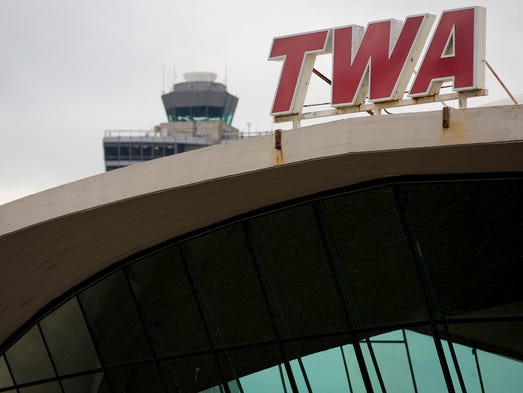 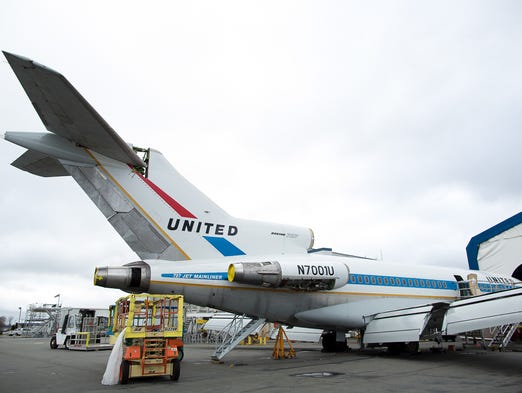 The Museum of Flight’s Boeing 727, the very first ever made, is prepared for a rare, final flight in Everett, Wash., on Jan. 30, 2016. The jet is expected to fly sometime in early March.  Jeremy Dwyer-Lindgren for USA TODAYFullscreen

An American Airlines Airbus A321 jet leaves Seattle’s Boeing Field in July of 2015 with a sports charter aboard.  Jeremy Dwyer-Lindgren for USA TODAYFullscreen 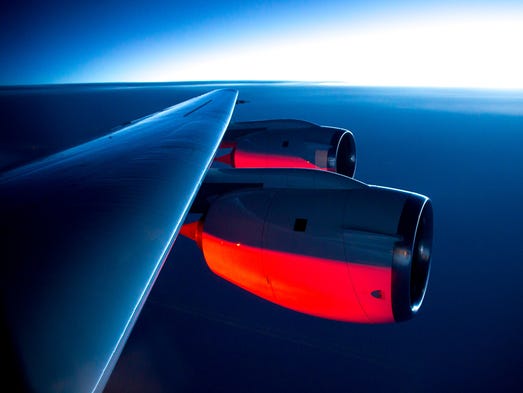 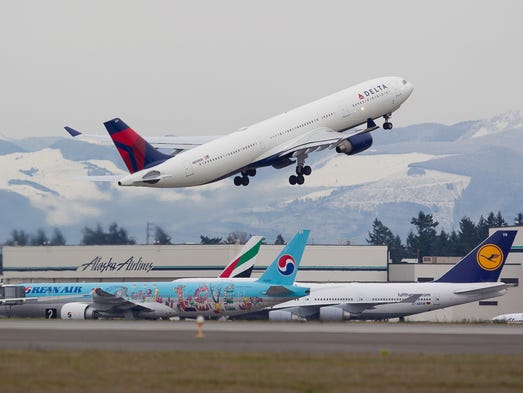 A look back at American Airlines’ route map circa 1952, found in a Welcome Aboard pamphlet photographed in Seattle on Jan. 27, 2016.  Jeremy Dwyer-Lindgren for USA TODAYFullscreen

Smoke trails the main gear of a Delta Air Lines Boeing 757 as it lands at Seattle-Tacoma International Airport on Dec. 31, 2015.  Jeremy Dwyer-Lindgren for USA TODAYFullscreen

An unpainted Boeing 737 bound for European low-cost carrier Ryanair takes off from Paine Field in Everett, Wash., during a test flight on Jan. 9, 2016.  Jeremy Dwyer-Lindgren for USA TODAYFullscreen 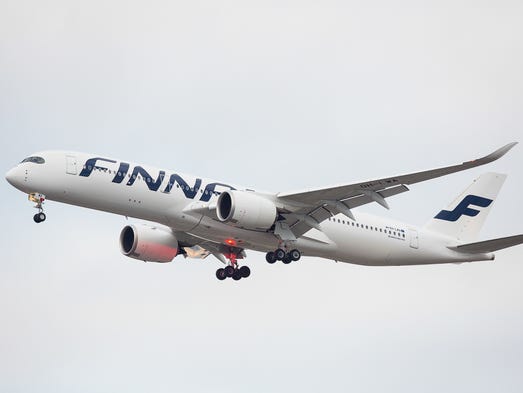 One of New York JFK’s newest visitors, a Finnair Airbus A350 jet, lands at the airport on Jan. 16, 2016.  Jeremy Dwyer-Lindgren for USA TODAYFullscreen 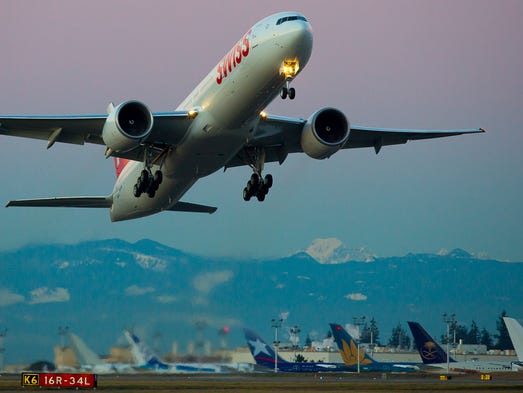 A small Cessna plane takes off from Snohomish County Airport in Everett, Wash., in January of 2016.  Jeremy Dwyer-Lindgren for USA TODAYFullscreen

An unpainted Boeing 737 bound for European low-cost carrier Ryanair takes off from Paine Field in Everett, Wash., during a test flight on Jan. 9, 2016.  Jeremy Dwyer-Lindgren for USA TODAYFullscreen

Alaska Airlines employees practice a dance before the company unveils its latest branding effort in Seattle on Jan. 25, 2016.  Jeremy Dwyer-Lindgren for USA TODAYFullscreen

Alaska Airlines employees pose for a photo with the company’s newest livery, unveiled in Seattle on Jan. 25, 2016.  Jeremy Dwyer-Lindgren for USA TODAYFullscreen 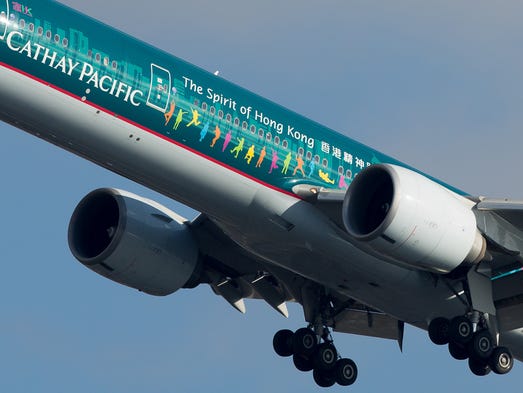