Have you heard about Atlas, the most advanced humanoid robot on the planet?

Ill bet the farm youve never seen anything like it before.

It could revolutionize what we think the factory robot can do. Atlas can be knocked off its path and then correct itself. It can do backflips, too.

It has dexterity no robot has ever had. What does that mean for you and me?

How You Get a Robot to Do Backflips

The trend to humanize robotics has captured the minds of scientists for decades.

But until now the technology has failed to give these robots the ability to move and react quickly to changing conditions around them.

How does a robot know to circumvent spills or other factory hazards?

What happens when it gets bumped into while running supplies from one side of a warehouse to the other?


How does it avoid getting bumped in the first place?

To be able to think on ones feet has traditionally been the edge every human worker has held over its robot counterpart.

But the gap is closing quickly.

The dexterity Atlas shows as it navigates hazards and performs tasks completely reinvents how we need to consider automated workforces.

But the video has also raised the ire of some. Even Elon Musk, who recently tweeted: 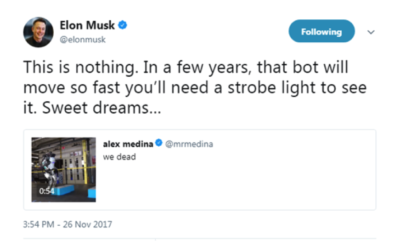 Its important to take Musks tweet with a grain of salt. For one, Musk’s Space X and Tesla companies are leaders in AI and robotics.

But Musk willingly plays devils advocate. It must be acknowledged that even the best innovations and advances are not without their issues or unintended consequences.

But technology, even as advanced as Atlas, is not something we should fear. We should embrace the change. Or at the very least get used to it.

Because like it or not, the robotics trend will continue to imprint itself across major industries more and more in the coming years.


Which leads me to six important laws of technology that help explain whats happening in robotics today.

The Six Laws of Tech You Need to Know1.Technology is neither good nor bad; nor is it neutral.

Kranzbergs first law is perhaps the most important one to remember. There is no inherent good or evil to any technology. The historical, political and economic context weighs far more heavily on whether a technology is good or bad.

2. Invention is the mother of necessity.

Take electric cars, for example. This trend included the development of new batteries, new lightweight materials, new infrastructure and so on.

Take your smartphone. Manufacturers created the hardware. Other engineers created the wireless chargers and headphones. Apps were created by other independent developers.


New technology is a package deal. The most impactful technologies are in fact many different innovations all coming together to make life better.

4. Although technology might be a prime element in many public issues, nontechnical factors take precedence in technology-policy decisions.

Solutions to technological problems are typically based on hard data and quantifiable information. However, the political and socioeconomic climate surrounding a technology ultimately determines whether or not it will be adopted on a wide scale.

No matter how efficient a technology may be, public opinion reigns supreme. Think Thomas Edisons smear campaign against Nikola Tesla.


5. All history is relevant, but the history of technology is the most relevant.

Advanced technologies often can trace their origins back to a major historical event. The need for advanced weaponry in WWII led to the development of the rocket engine and was the precursor to the Space Age and NASA.

To fully understand human history, we need to examine the technological history too and identify how its interconnected with other major events.

6. Technology is a very human activity and so is the history of technology.

Without the human element driving how technologies are used, the power of advanced tech becomes nonexistent.

Technological advances have been integral to our evolutionary path every step of the way. The larger point being when assessing the good or bad of todays advanced tech, remember this:

Technology is the reason humanity is what it is today. Technology makes life better.

Editors note: What is your take on Boston Dynamics Atlas robot? Do you think Musk and co. are right to be concerned or do they need to temper their alarm?

Tell us what you think at TomorrowsTrendsFeedback@Agorafinancial.