Comments by Executive Board member Yves Mersch and Governing Council member Vitas Vasiliauskas were published Wednesday by Eurofi, which is convening a meeting of financial regulators. An ECB spokesman said Mersch’s article was submitted on March 21. Vasiliauskas’s contribution was sent on March 15, according to his adviser Rima Kaziliuniene. Data has since continued to show economic growth slowing compared with 2017.

“Confidence has recently risen and convergence is being confirmed — partly because the temporary decline in the inflation rate has been weaker than our internal calculations had predicted,” Mersch said. “More resilience will follow eventually. Still, patience and persistence with respect to our monetary policy is required.”

Vasiliauskas, who heads the Lithuanian central bank, said his confidence has increased that it’s time to phase out the ECB’s bond-buying program.

The published remarks coincide with the start of the ECB’s monetary-policy meeting in Frankfurt, where officials are set to discuss how and when to communicate the next stage in their gradual exit from extraordinary stimulus. They’ll assess the domestic outlook against a backdrop of global risks including the potential for U.S.-led trade conflicts to worsen.

Euro-area inflation slowed to 1.1 percent in February, compared with a medium-term goal of just under 2 percent. March’s figure, released after the articles were submitted to Eurofi, was unexpectedly revised to 1.3 percent from an initial estimate of 1.4 percent.

Euro-area price growth has edged lower lately, but is expected to gradually pick up 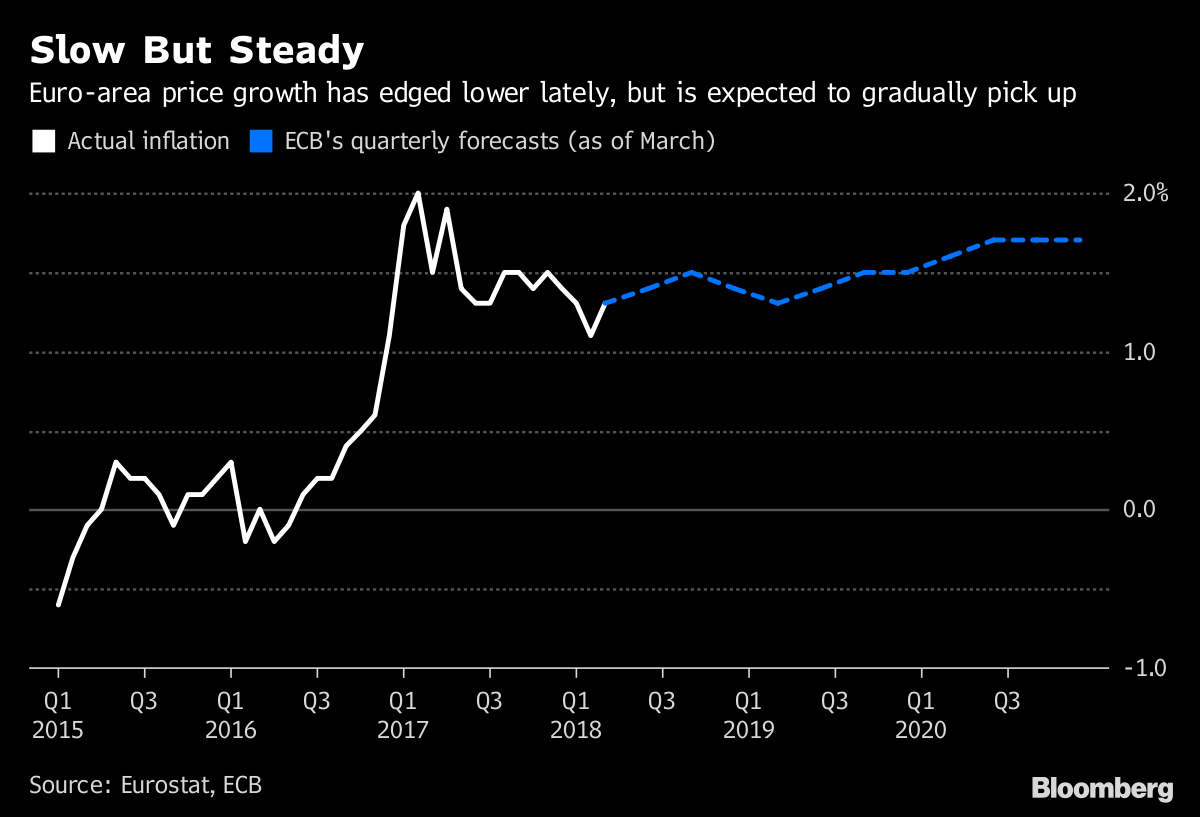 “We have witnessed the strengthening of broad-based growth and steadily declining unemployment, providing conditions for inflation convergence to our objective,” Vasiliauskas said. “This has increased my confidence that it is time to transition from the asset purchase program. However, the closure of the program should not be abrupt.”

Economists don’t expect major changes when the Governing Council issues its policy statement and President Mario Draghi addresses reporters on Thursday. The ECB has said it intends to continue bond purchases until at least September, to keep interest rates at current levels until “well past” the end of the program, and to reinvest maturing assets for an extended period.