The world’s ultra-wealthy have become quite proficient at stashing their wealth in places like Bermuda, the Cayman Islands and Switzerland — and significantly slashing their tax bills while they’re at it.

As of 2007, the latest year reliable data is available, wealthy households held about $5.6 trillion in accounts offshore. And while avoiding taxes is often the point of keeping it there, recent research shows that how much a government taxes doesn’t have much to do with the amount of cash its rich residents choose to keep abroad.

In September, a group of economists released a paper that found that two of the countries with the highest share of wealth banked overseas in 2007 were Saudi Arabia and the United Arab Emirates, where the personal income tax rate is zero. Venezuela was also high on the list. At the time, the income tax rate there was 34%. 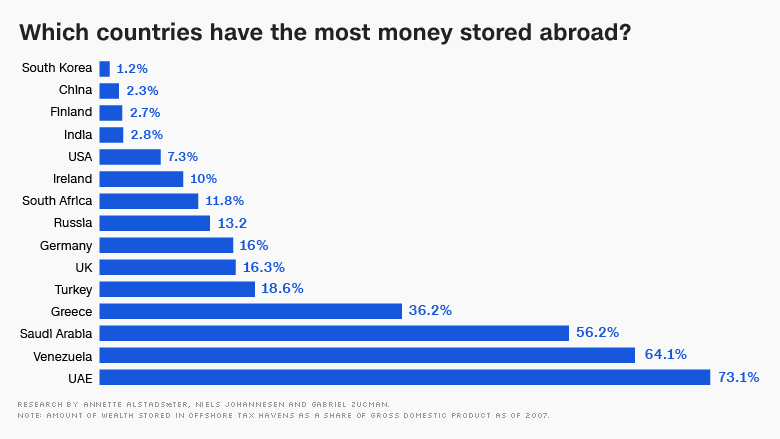 The countries that held the least amount of wealth in offshore tax havens in 2007 included Japan and Denmark, which then had top marginal tax rates of 50% and 59%, respectively.

On average, about 10% of the world’s personal wealth not counting corporate assets resides outside the owner’s native country. The United States is below average, at 7.3%, the researchers found. In 2007, the U.S. had a top income tax rate of 35%.

This data only became available in 2016, when some international banks began publishing statistics on their foreign deposits. The most recent data that the researchers could use was from 2007. After that, shell companies became a popular way to avoid new European financial rules, obscuring the nationality of offshore accounts.

Instead of taxation, researchers found countries with high rates of money held offshore typically are rich in natural resources, or have a history of political instability and corrupt, autocratic governments. For example, Russia’s offshore wealth rate is 13.2%, well above average.

“In Russia, there’s a big chance that someone’s going to steal your money if you get on the wrong side of them,” says Clark Gascoigne, deputy director of the non-profit Financial Accountability and Corporate Transparency Coalition, an alliance of unions and good governance groups. “So getting it out is a long-term plan to make sure you can hold on to your money down the road.”

In addition, countries situated close to Switzerland have historically made greater use of that country’s banking industry, although other offshore financial centers in Hong Kong and the Channel Islands have attracted more business over recent years as well.

Gabriel Zucman, a French economics professor at the University of California Berkeley who co-authored the study, says rules against tax dodging haven’t been enforced aggressively enough to deter tax professionals from helping the super rich from moving their money.

“Right now they can just pay fines it just becomes a cost of doing business.” says Zucman. “The way to reduce tax evasion isn’t cutting the marginal tax rate, it’s to shrink the supply by making it more costly for law firms to facilitate tax evasion.”

In order to cut back on the use of tax shelters, Zucman recommends that governments create registries of offshore assets, forcing disclosure of real estate and stocks, as well as financial wealth.

Currently, U.S. politicians are looking to take a step in that direction. Bipartisan bills pending in the House and Senate would require new corporations to disclose the actual people who own them, which would make it more difficult to use shell companies for money laundering, terrorist financing, and human trafficking.