Tesla Inc. (TSLA) may be getting all the attention right now, but it’s a mistake to ignore what’s going on with Detroit’s big three auto stocks.

While early Tesla’s self-driving breakthroughs may already be on the road (and in the headlines), many are forgetting about the big investments being made in the autonomous-driving space by Detroit’s big automakers. And those traditional automakers might be the most attractive way to play the auto segment as bulls and bears battle it out in dramatic fashion in shares of Tesla.

(For a technical look at how Tesla is stacking up right now, see Here’s Why Tesla’s China Business Could Explode.)

To figure out which major U.S. car maker looks the strongest from a momentum standpoint — and when you should buy it — we’re turning to the charts for a technical look. 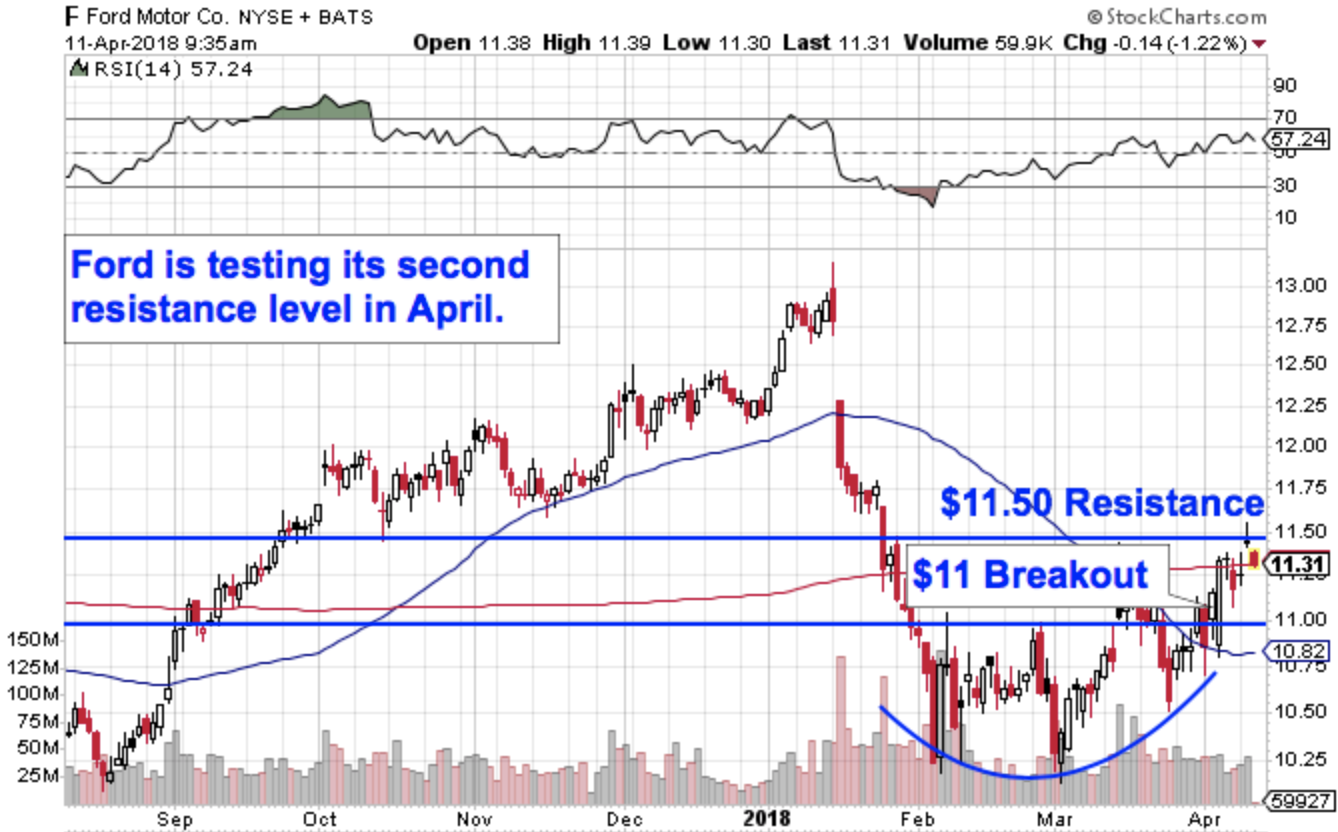 Ford (F) has been under pressure lately. Shares are off almost 10% since the calendar flipped to January 2018, underperforming the broad market in a meaningful way. But shares could finally be about to offer investors an about-face.

Ford has been working on carving out a bottom since February’s lows, and it made the first major progress toward that bottom at the beginning of this month, when shares pushed through intermediate-term resistance at the $11 level. Now, this stock is within grabbing distance of another resistance level at $11.50.


Simply put, it looks as if buyers are finally retaking control of Ford shares. A material push through $11.50 looks like a signal that it’s time to join them. 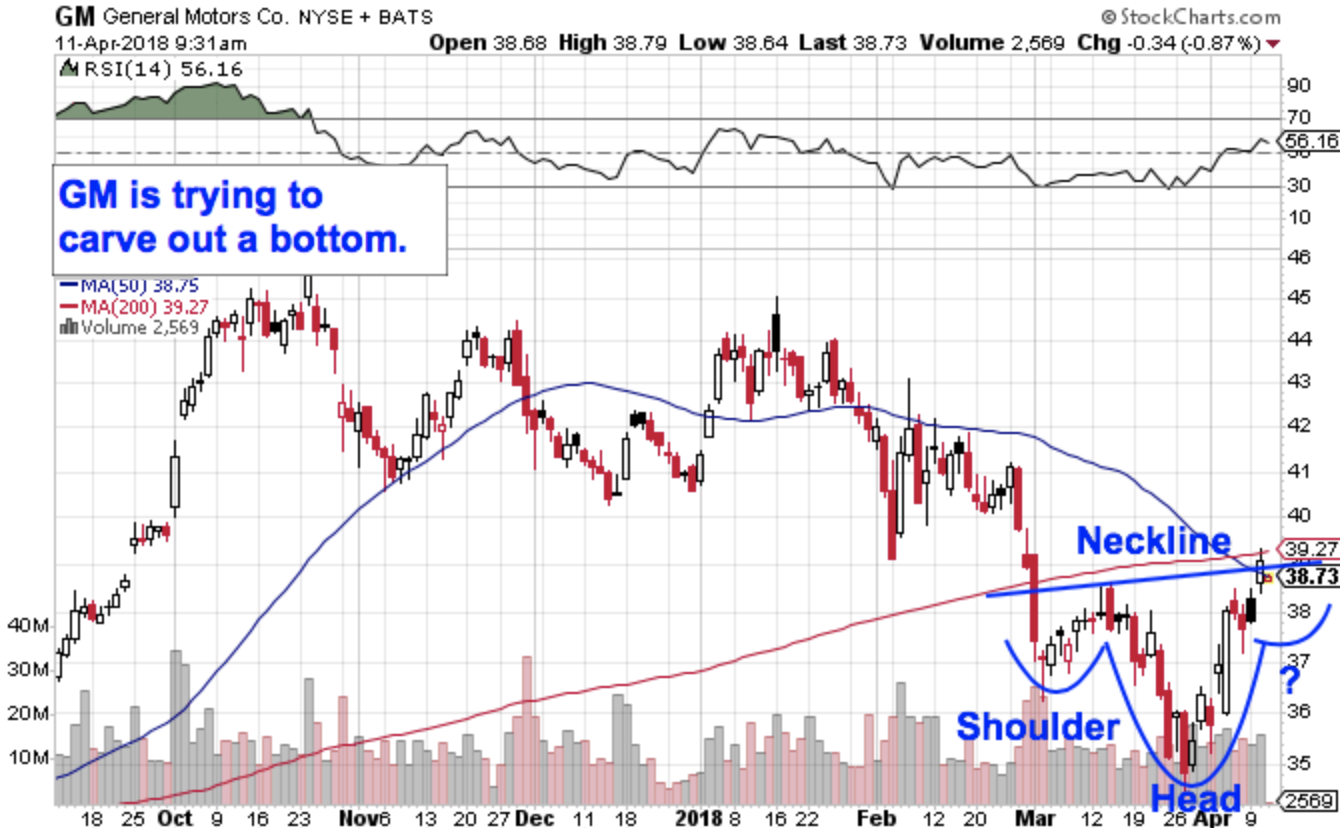 Meanwhile, the technical trajectory for shares of General Motors Co. (GM) looks a lot like what we’re seeing in Ford. After dragging lower during the first quarter of 2018, GM is in the final stages of carving out a bottom of its own.


In GM’s case, the pattern in play is an inverse head-and-shoulders setup, a bullish reversal pattern that indicates exhaustion among sellers. The pattern triggers a buy with a push through its neckline, currently at the $39 level for GM. Shares are within striking distance of that key price tag in today’s session.

It wouldn’t be abnormal for GM to correct a bit from here to contionue forming a “textbook” version of a right shoulder. That said, the buy signal is still just as valid if GM pushes straight through $39 this week. Stay tuned. 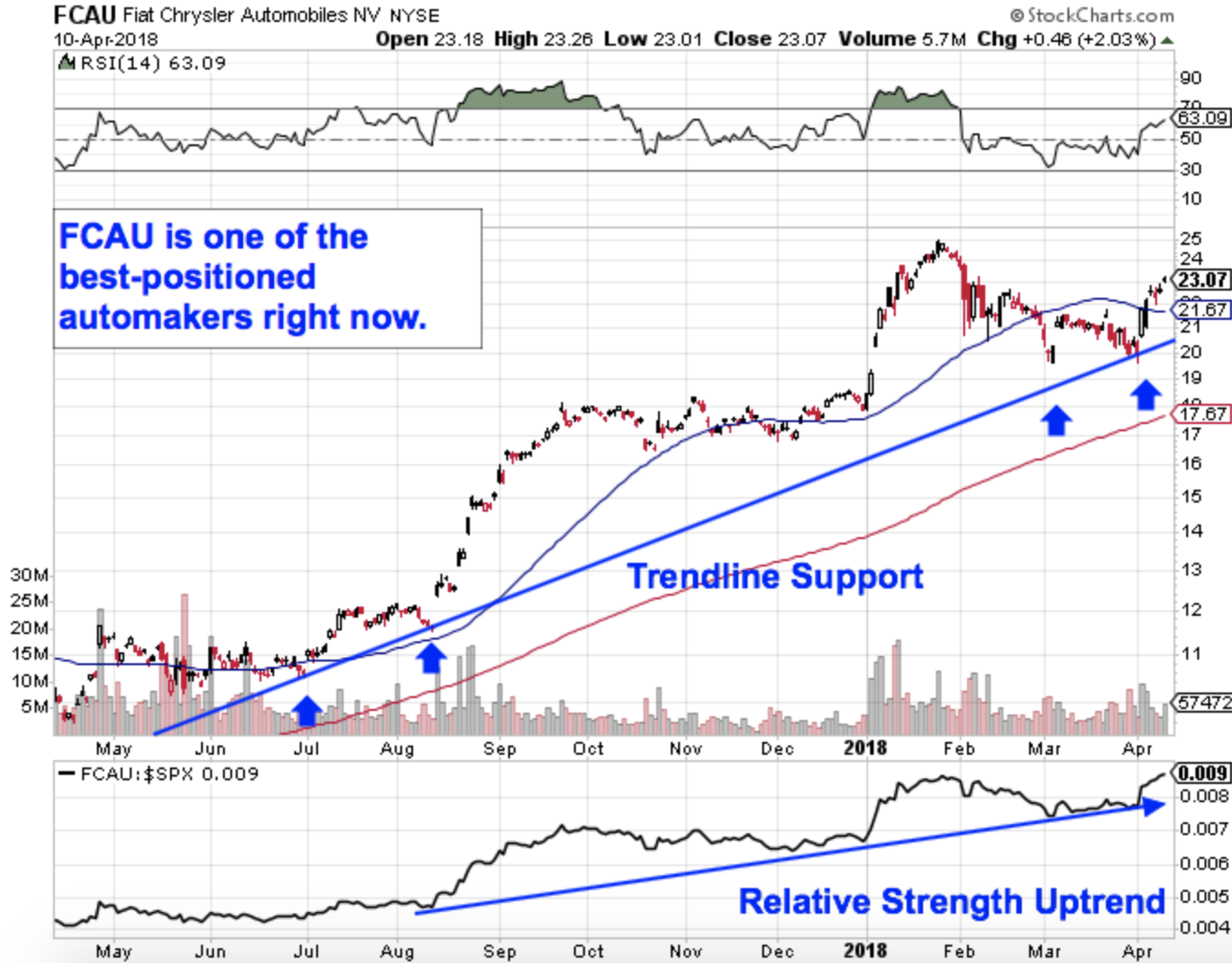 I’ve been saving the best for last.

Fiat Chrysler (FCAU)  is bar none the best positioned of the “U.S.” automakers right now, Tesla included. That’s because despite a correction early this year alongside the rest of the market, Fiat Chrysler’s long-term uptrend remains both intact and recently successfully tested.

The dip to trendline support at the start of this month provided investors with a comparatively low-risk, high-reward opportunity to pull the trigger on a long trade. And it sets the stage for more upside in shares of Fiat Chrysler ahead. Now looks like as good a time as any to take advantage of this uptrend in shares.