That grader is supposed to be at the coastal Hyde County farm every day. Which raises a question: Why did it take an outbreak of salmonella, one that sickened 23 people in nine states, to alert officials to problems there?

Amanda Heitkamp, aUSDA spokeswoman, acknowledged to The Indianapolis Star that a typical day for a grader involves checking a facility’s equipment before that day’s operation. At this point that any problems observed are addressed.

After that, the grader will enter the grading booth to inspect eggs during the processing day.

“In this instance, our grader(s) did not observe issues that would have triggered a report to FDA inspectors,” Heitkampsaid via email.

But Heitkamp didn’t specifically address the questionof whether a grader should have observed those issues. Salmonella is found in chicken poop and the excrement of other birds, reptiles and people.

A person gets a salmonella infection which causes severe diarrhea thatmay be bloody,fever,nausea, vomitingand abdominal pain from eating contaminated food. Symptoms typically start 12 to 72 hours after eating; it can get inside eggs when they’re not properly washed or if the shells are cracked and the insides are not cooked enough to kill the bacteria.

According to a USDAegg-grading manual, graders must “continually monitor product handling and general condition of equipment, and housekeeping throughout the (egg processing) facility” and ‘identify sanitation problems requiring corrective action.”

“Were sorry for any concerns we may have caused consumers because some of our practices fell short of FDA standards, and we vow to do better in the future.”

That mighthave applied to Rose Acre’s Hyde County farm,where many of the FDA violations were made in the egg processing building. The company, based in Seymour, Ind., began in the 1930s and has grown to the USA’s second largest egg producer with egg farms in 17 states, according to its website.

After the salmonella outbreak, FDA inspectors who visited the farm found that the procedure for cleaning the egg orientor, a grading and packing machine,was not being done, and employees were observed cutting corners while washing the eggs. Water from the “ceilings, pipes and down walls” was found dripping onto production equipment, and dried egg and shells were seen to have accumulated on the same areas over multiple days.

Other violations, including excessive rodent activity, were noted, but those were observed in the farm’shen houses, which graders typically do not have access to.

After eggs arewashed in the processing facility, graders check the eggs for cracks or other outside imperfections. Theyalso take a look inside the egg using a process called candling because the bright light initially used on farms before they had electricity was a candle.

Once the eggs are deemed up to the USDA’s quality standards, they receive a USDA seal.

The value of the program, which is voluntary, is communicatingto consumers that they are buying a product held to higher standards, according to Darrin Karcher, an extension poultry specialist at Purdue University.

“It gives another layer of credibility to the consumer,” Karcher said.

However, Karcher could not say whether in this particular case the USDA grader missed an opportunity.

A grader’s day starts with a visual check of the processing plant before work begins, Heitkampsaid. If problems are discovered, the grader is supposed to work with facility management to correct them before operations start.

“This is not a substitute for FDAs more in-depth food safety regulatory examinations of an entire operation,” Heitkampsaid. “We take our responsibility very seriously and any time a significant issue is identified, USDA graders flag it for FDA through a formal process to ensure their regulatory inspectors are informed in a timely manner.”

Rose Farms’ North Carolina recall is one of the largest egg recalls since 2010when 500 million eggs from an Iowa producer were recalledand nearly 2,000 illnesses from salmonella were reported. Thatoutbreak spurred the FDA and USDA to issue amemorandum of understandingoutlining information sharing priorities.

The memo authorizes USDA graders to withhold theseal if they believethat a facility is in violation of food safety rules or if the product poses a risk.

After the FDA linked the pathogen back to Rose Acre’sNorth Carolina farm, the company issued a voluntary recall of more than206 million eggs, out of what the company called “an abundance of caution.” More than 2,000 types of salmonella exist, but that large variety may make it easier for disease detectives to zero in on the source; the one traced to the victims and the Hyde County farm is calledsalmonella Braenderup.

Rose Acre already has put several corrections in place at the farm, including retraining employees and creating a position for a corporate sanitation manager,according to the company’s response to the FDA’s inspection. Eggs from the facility aren’t being sold now and won’t be in grocery stores “until we are confident that compliance has been achieved.”

“Were sorry for any concerns we may have caused consumers because some of our practices fell short of FDA standards and we vow to do better in the future,” Tony Wesner, Rose Acre Farms’ chief operating officer, said through a spokesperson.

This is Rose Acre Farms’ only recall, according to FDA records. The company was issued a warning letter for its White County, Ind., plant in 2011, but the case was later closed after Rose Acre took corrective action.

The company also made headlines several years ago for a lawsuit it brought against the USDA. Rose Acre attacked new salmonella regulationsand argued that the agency was acting against the company’s rights.

April 12: What you need to know about the E. coli outbreak, now in 7 states
April 9: J.T.M. Provisions issues recall on 14K pounds of barbecued beef products

After almost two decades of litigation and multiple appeals, the courts ruled against Rose Acre, determining that the effect on the company’s bottom line was slight when compared to the public health risk.

The egg recall comes at a time when Americans are questioning the safety of food from their grocery stores.

Another recent outbreak, this time of E. coli, sickened more than 120 people and caused one death. The pathogen was traced back to romaine lettuce from a farm in Arizona.

“When you tell people they might get sick but theres nothing they can do about it, people dont want to hear that,” Deidre Schlunegger said. Her organization, Stop Foodborne Illness, advocates for food-safety policies.

Getting people interested in foodborne illness is sometimes difficult, but the problem is more serious than many realize, she said.

The federal Centers for Disease Controlestimates that foodborne illnesses sicken 1 in 6 Americans every year. About 128,000 are hospitalized, and 3,000 people die.

“What concerns me is that often people make the changes after people are ill,” Schlunegger said.

Cleaning hands and surfaces prevents germs from spreading around the kitchen, and keeping raw food, especially meats and seafood, separate from ready-to-eatfoods prevents cross-contamination. Cooking food to the correct temperature is essential for killing germs that will make you sick, and keeping food refrigerated properly also prevents the spread of bacteria.

As of April 13, 2018, 23salmonella infections in nine states have been attributed to eggs from Rose Acre Farms henhouse in Hyde County, N.C. 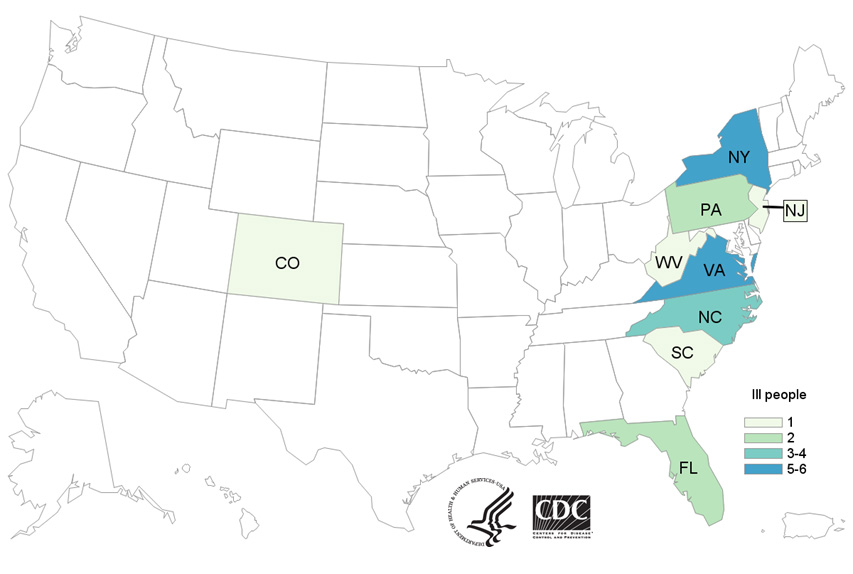