Shares of Disney (DIS ) surged over 3% in morning trading Thursday after Comcast (CMCSA ) announced that it will no longer pursue key 21st Century Fox (FOXA ) entertainment assets. Disney now looks poised to secure Fox’s film and TV studio, as well as other properties, in a move that could propel the conglomerate in the age of Netflix (NFLX ) .

Comcast said Thursday that it won’t outbid Disney’s $71.3 billion cash and stock offer for Fox’s film and TV studios, cable networks such as FX, a controlling stake in Hulu, and international properties including Star India. Notably left out of any potential deal are Fox News, Fox Sports 1, and the Fox broadcast network.

Another asset up for grabs is European pay-TV giant Sky PLC, which Fox currently owns 39% of. Comcast now hopes to secure Sky for itself in order to expand beyond its mostly domestic web. Last week, the cable and internet giant outbid Fox in its pursuit of complete control in Sky.

Comcast’s decision also follows the U.S. Justice Department’s recent announcement that it will appeal a federal judge’s decision to approve the AT&T (T ) and Time Warner merger. With that said, Disney’s bid to buy some of Rupert Murdoch’s media empire was approved by the Justice Department at the end of June, after Disney agreed to divest Fox’s regional sports networks.

Why Disney Wants the Deal

The Justice Department’s conditions still allow Disney to absorb the parts of Fox that are vital to its long-term streaming strategy, including Hulu—which had previously been in question.

Disney plans to roll out a stand-alone streaming service in late 2019 that aims to compete directly against Netflix, Amazon (AMZN ) , and soon enough Apple (AAPL ) , as the cord-cutting revolution rages on. The company will be able to utilize Fox’s TV and movie franchises such as The Simpsons, Avatar, X-Men, and many more at the box office, on streaming services, and in its expanding theme park business.

Investors should think of this new entertainment arms race based mostly on the accumulation of content and franchises people are willing to pay to watch. Disney’s streaming platform will theoretically see it bundle all of its historic and cartoon content and its new live-action remakes, along with its Pixar, Marvel, and LucasFilm offerings. Disney already has plans to make new a live-action Star Wars series as well as new Marvel shows.

Disney could also easily adapt to Netflix’s model of offering a wide range of small-budget “indie” films and shows along with its blockbusters and family-friendly Disney and Pixar movies, which are also released in theaters—something that still hasn’t lost its appeal altogether.

Shares of Disney have surged roughly 270% over the last 10 years, doubling the S&P 500’s climb. However, DIS stock has moved mostly sideways over the last three years and has experienced some pretty heavy turbulence over the last 12 months. 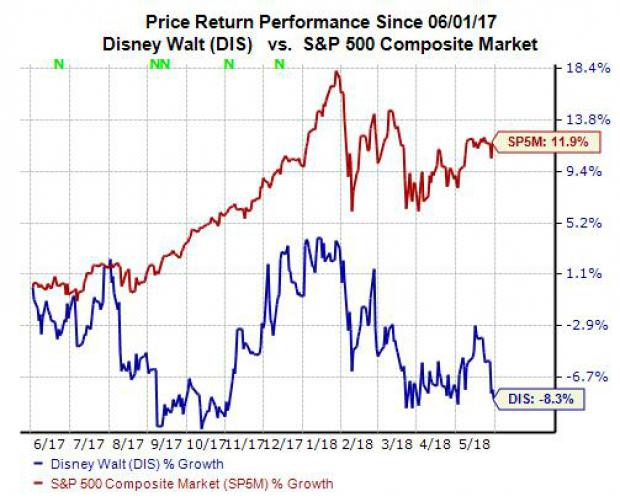 Over the last year, DIS has traded as high as 17.8X and as low as 13.4X, with a one-year median of 15.3X. Investors can also see that Disney stock is currently trading near its five-year low. Therefore, it isn’t too much of a stretch to say that DIS looks rather attractive at its current level.

Looking ahead, the entertainment power’s quarterly earnings are expected to surge by over 29% to reach $2.04 per share, based on our current Zacks Consensus Estimates. Meanwhile, Disney’s full-year earnings are projected touch $7.09 per share, which would represent over a 24% expansion.

Disney has seen its full-year earnings estimate climb from $6.93 per share to $7.09 share over the last 90 days. The company is also currently a Zacks Rank #3 (Hold) that boasts an “A” grade for Value and a “B” for growth in our Style Scores system.

DIS looks like it might be worth considering at the moment, especially since it looks poised to expand and adapt in the internet-based entertainment world. And let’s not forget that Hulu is widely popular and access to India’s massive population might prove highly beneficial.

Make sure to come back to Zacks for more Disney updates with the company set to report its fiscal third quarter financial results August 7.

And this outperformance has not just been a recent phenomenon. Over the years it has been remarkably consistent. From 2000 – 2017, the composite yearly average gain for these strategies has beaten the market more than 19X over. Maybe even more remarkable is the fact that we’re willing to share their latest stocks with you without cost or obligation.