The economic might of the mainland’s 31 provincial-level territories ranges from rust-belt areas in the northeast to farming areas in the central plains to Silicon Valley wannabes sprouting up in support of companies such as Alibaba Group Holding Ltd., Tencent Holdings Ltd. and Huawei Technologies Co.

The wide disparity puts some residents at the cutting edge of the developed world, stepping into battery-powered cars that silently ease down city streets, or as consumers facing advertising choices generated by image-recognition technology. Across China, close to 1 billion consumers shop or pay for purchases using apps on their smartphones.

At the other extreme are rural towns where water still needs to be carried by hand from a well.

"Development in some of the major cities can now match anywhere in the world, but that’s not the whole story," said Qian Wan, analyst for Bloomberg Economics, who specializes in provincial research. "In part of the inland areas, even some places along the coast, urbanization — and therefore incomes — lags far behind." As of early 2018, cumulative lending by the World Bank to help development in China surpassed $60 billion for 416 projects.

At the high end are the municipalities of Shanghai and Beijing. Gross domestic product per-capita adjusted for purchasing power — one measure of average incomes — were slightly more than $53,000 last year. That’s similar levels to Switzerland and the U.S. At that level, in fact, those districts would rank among the top 10 of all countries with populations of at least 3 million people, according to Bloomberg analysis of data sourced from the International Monetary Fund and China’s National Bureau of Statistics.

READ MORE: How China’s provincial GDP per capita compares with the rest of the world

Shanghai, the mainland’s biggest financial center, and Beijing, the nation’s capital, lead the list in large part because they are more compact and benefit from supportive government policies. They have the best universities, the highest-paying jobs and until recently, unmatched infrastructure development. For at least two decades, general laborers and highly skilled workers have been lured to help the headline cities grow, though most have second-class status. Most lack the difficult-to-acquire household registrations, or "hukou", meaning they don’t have access to legal residents’ rights to social services and education resources.

"There are places farmers can move, now, and transfer to being fully urban, but there is a point system for elite cities like Beijing and Shanghai," John Giles, a World Bank economist, said at a recent conference on China’s anti-poverty campaign in Washington. "You have urban residents who don’t want those migrant kids in school with their children."

China’s yawning economic disparities aren’t just of academic interest — they form the basis for one of Xi Jinping’s three “critical battles,” namely poverty alleviation. And as the economy slows, policies that bring the incomes of those in Gansu closer of those in Shanghai will help ensure that the whole pie grows in a sustainable way.

"While early waves of migrants flocked to more affluent coastal and higher-tier cities, more migrants are now choosing to stay within their home provinces," Hyde Chen, an equity analyst for UBS AG in Hong Kong, wrote in a report that compared urban development trends.

"Historical experiences from mature economies suggest that household incomes of wealthy and poor areas in China will likely converge over time," Chen said. "In China, the income convergence is taking place at a fast pace, with the household per-capita income gap between lower-tier cities and tier-1 cities narrowing from 56 percent in 2005 to 46 percent in 2017."

Just 10 years ago, it would’ve taken a dozen workers in Guizhou province to earn what one Shanghainese made. By 2017, that wealth gap had narrowed by half.

"Uneven" Progress in the Past 10 Years

China's provincial-level economies had varying degrees of success the past decade. Tianjin was fastest-growing among the top five by GDP per capita. Guizhou and Tibet led the low-income group. 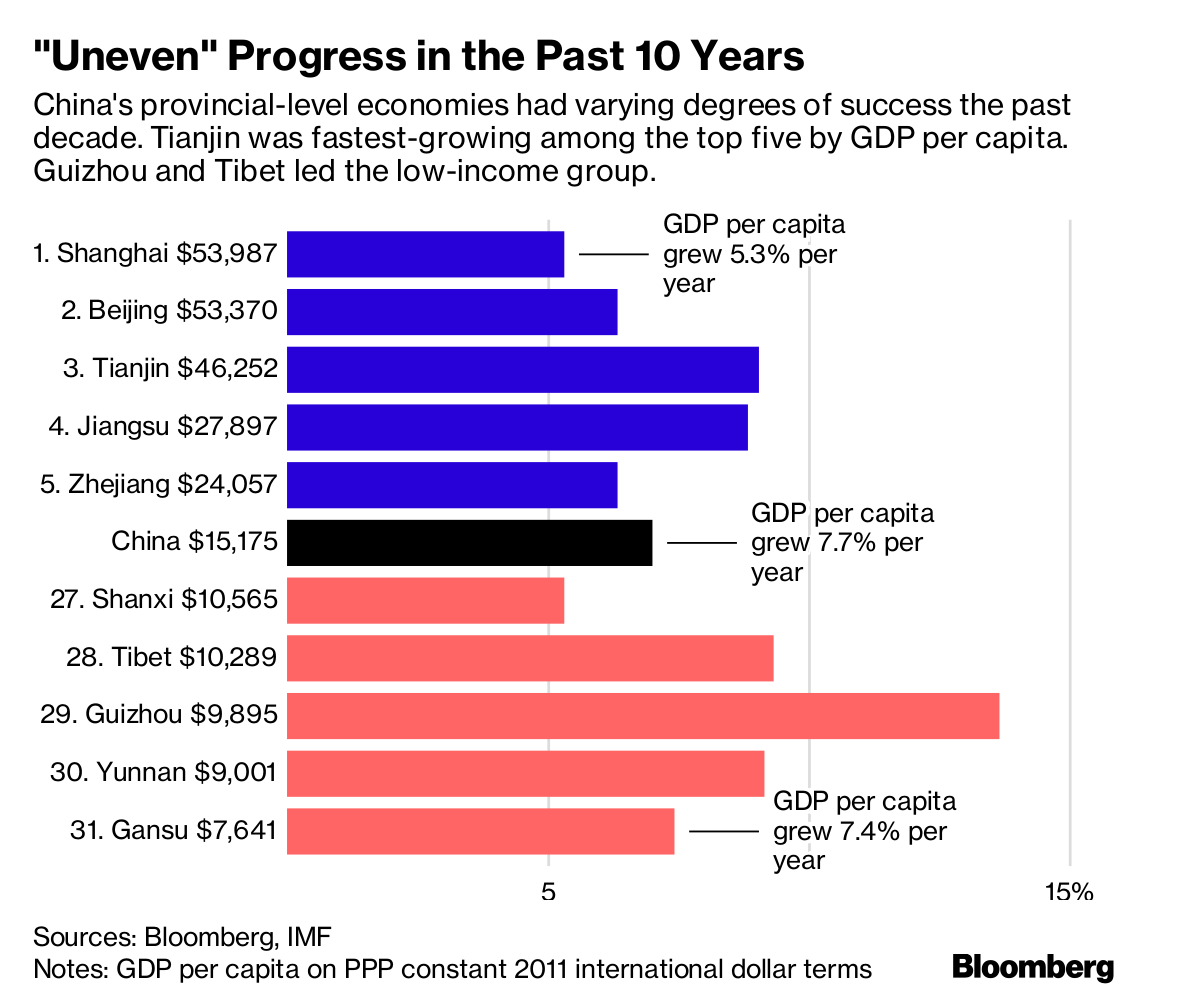 Guizhou and Yunnan provinces in the south and Gansu in the north each had per-capita GDP income below $10,000 last year, ranking them among Ukraine, El Salvador and Guatemala. But with a combined population of 110 million — nearing that of Japan, with average income of $39,000 — those three provinces have tremendous potential.

Starbucks Corp. Chief Financial Officer Scott Maw said investing in coffee-growing areas of Yunnan has been a boon to both his company and the region. "I’m sure we benefit from that, but the vast majority of the coffee that is produced under those improved practices goes to others," he said at a UBS conference on consumers and retail in March. "In a couple of years, you’ll have 600 million middle-class customers in China."

China is changing from a land of villages and farming plots to one dominated by mega cities and rapidly growing towns. Overall urbanization stands at 59 percent, according to the National Bureau of Statistics, with Guangdong — the most-populous province — the most citified: it’s urban ratio is 70 percent. By comparison, the U.S. is at 82 percent, Thailand 50 percent and India 33 percent, according to the United Nations.

METHODOLOGY:
Regional Chinese GDP per capita approximated by dividing the total preliminary nominal provincial GDP, as of Dec. 31, 2017, by total population, as of year-end 2016. Assumed conversion rate was 3.849 Chinese yuan = 1 international dollar, the implied rate between 58,417: 2017 Chinese GDP per capita in local currency and 15,175, in purchasing power parity (2011 constant international dollar terms). Figures cited in this article and appending charts and tables are general assessments of wealth and income due to lack of timely, official and comprehensive regional price-parity indexes. Per-capita income comparison between Shanghai and Gansu could therefore have imperfections much as a pairing of New York City with Alabama.

— With assistance by Wei Lu, and Alexandre Tanzi