Houses are built to be inhabited, not for speculation Xi Jinping

Xi Jinping and Chinese leadership have undoubtedly been more effective in projecting competent leadership than their American counterparts in recent history. Unfortunately, this was done in large part through the use of unproductive debt. The consolidation of power by Chinese leadership came at the expense of economic reform and the liberalization of its society.

Now that the Chinese communist party has effectively consolidated power, it will have to pay for its past excesses and missteps as the effects of past policies designed to ensure stability and growth at all costs have created burdens on the Chinese economy and the Chinese people that have become too significant to continue sweeping under the rug. This process of monetary tightening and increased financial regulation will have a significant impact on commodity producers and companies that rely on the Chinese consumer.

China is a country in which the private sector and public sector are so intertwined that it is impossible to understand its economic trends without first considering the political motives that may be driving them. In recent history, Chinas political leadership has placed a high value on economic and societal stability as it realized that any disruption to the general order may prevent its leadership from its pursuit of wholly consolidated power.

This explains Chinas decision to inject unprecedented liquidity into its economy during the 2008 financial crisis. While the rest of the worlds economy was relentlessly deleveraging and contracting, Chinas economy continued to grow with only a few quarters below 10% GDP growth:

China continued to put a high price on stability and high rates of economic growth in the post-crisis era. Xi Jinping assumed the position of General Secretary in 2012 and was put in an extremely tough situation. Xi has shown a strong desire to consolidate power and strengthen the Communist Party but he has had to do this during the first period of doubt around future economic growth engines for China. China was able to seemingly grow effortlessly starting in the 1970s thanks in large part to a rapidly increasing working-age population: 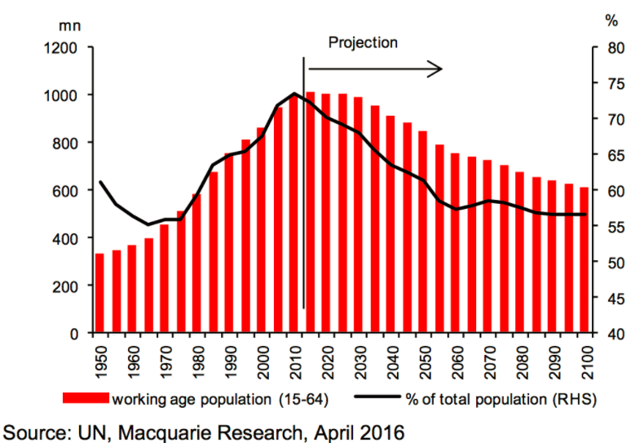 While any projection of future trends is extremely difficult, it is clear that Chinas current demographic trends no longer provide support for economic growth as its working age population has already begun to decline and its elderly population is now its fastest growing group.

Given this backdrop of lower growth potential, Chinese leadership had two options:

1. Accept significantly lower growth rates with the aim of sustainability, knowing that this would adversely affect the popularity and political capital of its leadership.

2. Strive for growth by any means and consolidate power in the process. Ensure that the grasp of power is so firm and reaches all aspects of Chinese society that any signs of economic weakness no longer threatens the authority of its leadership.

In hindsight, it is clear that Chinese leadership chose the latter. China strove for growth by any means necessary. Through the combination of loose monetary policy, a blind eye towards financial risks and excessive fiscal spending, China has been able to stay on track to meet its shortsighted goal set in 2010 of doubling the size of its economy by 2020.

Chinese leadership turned a blind eye to property bubbles forming with its cities: 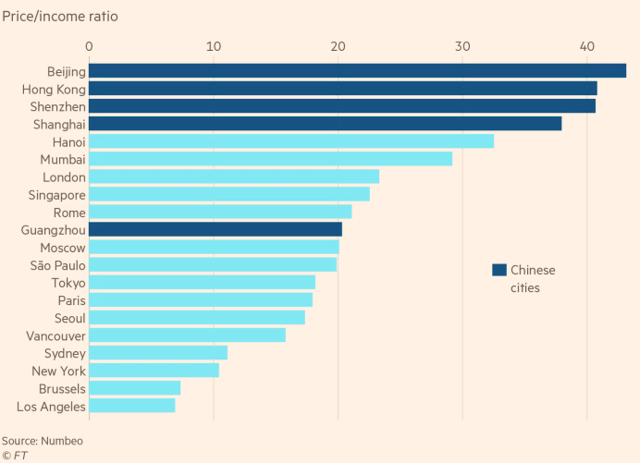 The Chinese government allowed (and often subsidized) property developers to build excess capacity and ghost cities since these efforts led to jobs and contributed to GDP. Hui Ya Kan, the chairman of the Evergrande Group, became Asias second richest man. This is a classic bad billionaire, someone who doesnt get rich from innovation and contributing to economic productivity, but rather someone who made his fortune through a combination of excessive risk taking and connections to public sector officials.

China also effectively turned a nation of savers into a nation of speculators. The Chinese population was known for valuing thrift and having a natural aversion to excessive debt in the pre-crisis era. However, as China has shown us, continuous feedback loops of rewarding risk-taking is enough to break even the most well engrained cultural norms. Throughout the past decade, any time financial assets seemed at risk, Chinas central bank was there to save the day.

This made those that didnt take on excessive debt to buy overvalued property losers and those that did were rewarded handsomely. Just as property prices were on the cusp of a real correction back in 2015, the Central Bank ramped up liquidity to ensure stability heading into the National Party Congress, which took place in October: 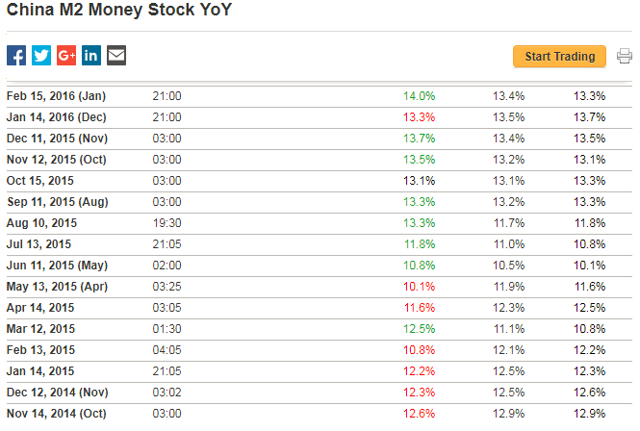 Its important to note that all of these efforts were done with the goal of having consolidated power in the Chinese Communist Party with Xi Jinping as its leader. That has now happened. Xi Jinping has achieved an unprecedented level of power and has a firm grasp over virtually all aspects of Chinese society.

He has had his thoughts written into Chinas constitution, Chinese students learn the importance of loyalty to the Communist Party and Xi himself as part of their grade school curriculum, Chinese villagers are disavowing their religious ties and replacing pictures of Jesus with pictures of Xi in their homes, all companies doing business in China (Domestic and Foreign) are encouraged to hire and promote those with ties to the Communist Party, and his anti-corruption campaign effectively took the voice away from any well-known political dissidents.

Now it is time for Chinese leadership to deal with the issues that slipped under the radar during their pursuit of undisputed, authoritarian leadership. Chinese leadership is aiming to deflate the property bubble, as it becomes a cause for societal unrest when housing is no longer affordable for the masses. This will have some far-ranging implications for the economy as mortgage debt has been rapidly growing and so much of Chinas household net worth and savings are tied up in residential equity.

China will experience significantly lower growth rates as it becomes less reliant on inefficient and excessive fiscal spending, deflates the property bubble and deals with the ensuing and inevitable credit crunch and continues to face demographic headwinds. The real catalyst for this shift isnt an economic data point, but rather the consolidation of political power that has enabled Chinas leadership to take on these challenges with a greater sense of urgency.

Through this process of monetary tightening and a crackdown on financial risks (which is already taking place as can be seen through the lower rates of growth in M2 as well as the rising yields on the Chinese 10 Year), commodities and businesses that rely on the Chinese consumer are the most at risk. We witnessed the effects of deflation in China on the global economy in 2015 to a small extent. The same companies and markets that did poorly in 2015 are likely to do poorly again as China goes through what is likely to be a more aggressive approach to cracking down on financial risks and bubbles rampant in its economy. This will all take place as borrowing rates are rising (not falling as they were in 2015):

The signs that this slowdown is likely to take place soon are abundant. The Chinese yield curve is dipping in and out of negative territory, Chinese property prices are hitting a wall, measures of investment and business optimism are consistently coming in below forecasts and Chinese central bankers are sounding the alarm on financial risks on a weekly basis.

Many of the assets that are most at risk are trading near all-time highs due to 2017 global economic growth beating expectations due to a variety of factors that are unlikely to have the same effect in 2018. This makes it incredibly cheap to bet against the global commodity producers, companies that rely on the Chinese consumer, Chinese stock indices and companies that are the most sensitive to global growth.

I plan on taking short positions/buying put options in MCHI, EWH, commodity producers and companies most sensitive to the Chinese consumer and global economic growth in the coming month to hedge against the coming economic slowdown in China.

About this article:ExpandAuthor payment: $35 + $0.01/page view. Authors of PRO articles receive a minimum guaranteed payment of $150-500.Tagged: Investing Ideas, Short IdeasWant to share your opinion on this article? Add a comment.Disagree with this article? Submit your own.To report a factual error in this article, click here