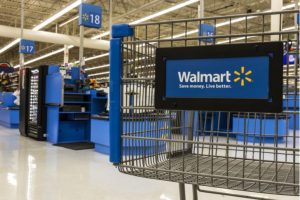 CEO Doug McMillon is Captain Ahab and Amazon.Com (NASDAQ:AMZN) is his Moby Dick. Since becoming CEO of the Arkansas-based retailing giant in 2014, McMillon has been trying to steal Amazon’s crown as the way America eShops.

Under his guidance, Walmart bulked-up the tech group in Silicon Valley, then in 2016 the company bought Jet.Com, an innovative etailer, and handed its CEO, Marc Lore, the keys to its electronic kingdom.

Since then the shares have gained 33%, and revenues have grown by $30 billion. The problem is, going from $485 billion to $514 billion is just a 6% gain. Between 2016 and early 2018, ecommerce sales did indeed grow faster than Amazon’s etailing numbers. Then numbers got bigger and growth sagged,

Rather than arguing about how Walmart’s Ahab is chasing Moby Dick, what should be asked is why chase Moby Dick at all.

If Amazon jumped off the Empire State Building tomorrow, Walmart might be right behind it.

But Walmart stock was below $100 per share on Mar. 21 because chief technology officer Jeremy King, who built Walmart Labs in California, is stepping down.

King had signed technology partnerships with Microsoft (NASDAQ:MSFT), Alphabet (NASDAQ:GOOGL), and Nvidia (NASDAQ:NVDA). He was often the face of the company when it sought to compare itself to Amazon.

There are analysts who think Walmart’s efforts in ecommerce make it a better buy than Amazon. These people are wrong.

Walmart is nothing like Amazon, because $30 billion in added sales over two years is growth of just 3% per year. Walmart is supposed to be a stock you buy for income, a dividend of $2.12 per year it takes $6.1 billion to earn back.

In its 2016 fiscal year Walmart had net income of $15 billion. This last year net income was $7.2 billion. Walmart’s dividend was 48 cents per share five years ago. It’s now 52 cents. Based on operating cash flow of $27.7 billion last year the dividend is safe. Based on net income, not so much.

Rather than chase Amazon, Walmart should be chasing Costco Wholesale (NASDAQ:COST), which has been beating its Sams Club down for years now.

There are indications it’s doing that, building its own milk production infrastructure to cut out all middlemen. Walmart has long had a host of store brands, an area where Amazon is only now starting to copy it.

Store brands can define a company, even more than its ecommerce initiatives. Walmart’s store brands fit squarely in the middle class. Amazon’s store brands, like AmazonBasics, tend to be aspirational. Costco’s Kirkland merchandise can be better than what it’s copying.

The Bottom Line on Walmart Stock

Walmart should be focused on delivering store brands with high quality and low prices through control of the supply chain. Squeezing out costs and handing gains back to investors as dividends rather than buying back stock in hopes of creating capital gains, should be the game plan.

That’s what a mature company would do. By chasing Amazon and its big capital gains, Walmart is acting like a man with a mid-life crisis ogling that red sports car and the blonde behind the wheel.

That story never ends well. Walmart needs to grow up.

Dana Blankenhorn is a financial and technology journalist. He is the author of a new mystery thriller, The Reluctant Detective Finds Her Family, available now at the Amazon Kindle store. Write him at [email protected] or follow him on Twitter at @danablankenhorn. As of this writing he owned shares