IBM (IBM) reports earnings on Tuesday night, but the charts tell us to approach Big Blue with caution here.

Now, IBM was one part of my portfolio until this winter, when I went to higher cash levels. The stock was one of the casualties, but I’m currently in the process of redeploying some cash.

Is it time to get back into IBM? Well, I’ve fallen into and out of love with the firm’s alleged “renaissance” enough times over CEO Ginni Rometty’s tenure to know not to believe a comeback until I see it.

Analysts expect IBM to report a another quarter of revenue growth on Tuesday evening. However, I believe the firm will have to show momentum off of the 27% cloud-based revenue growth it reported last quarter. Mobile and Security are also areas where we need to see continued strength.


It’s also worth noting that while IBM’s share price has gone both up and down in recent years, it’s been mostly down since early 2017. Let’s look at the stock’s chart: 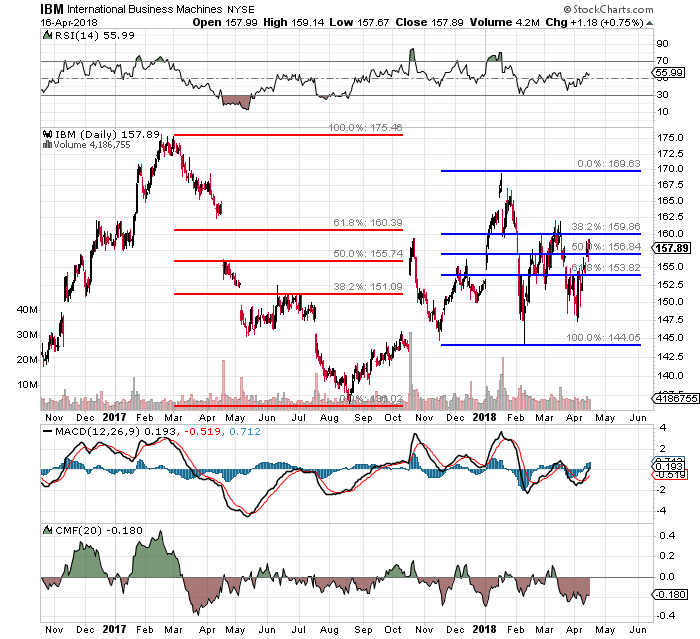 However, the model above shows us potential support below $154, with $144 completing a 100% retracement for the second time. First-line resistance should show close to $160, which could become support on a positive reaction. (IBM closed on Monday at $157.89.)

This is clearly a high-risk name for a small investor, but you could attempt to make money on a positive reaction to Tuesday’s earnings if you’re willing expose yourself to discounted equity.