You already know the oil market is in the middle of a historic rebound, but you might not know you can turn this rally into triple-digit profits by the end of summer…

The price of West Texas Intermediate (WTI) crude oil is up nearly 20% on the year and up 45% over the last 12 months.

And an important indicator signals it’s heading even higher…

The Brent-WTI crude oil spread has surged to its highest point since May 2015. That’s a sign the WTI rally is far from over, and it’s creating a money-doubling opportunity.

When global oil prices are rising, Brent crude, the international oil benchmark, typically trades for more than the United States’ benchmark, WTI. That’s not because the oil is any different – in fact, WTI is better oil – it’s because Brent responds more quickly to international changes in the oil market.

But WTI eventually catches up…

Urgent: Oil prices could soar to $100 (or higher) ahead of largest IPO ever – click here to see how you could triple your money from oil’s epic rise.

That means the difference between WTI and crude oil prices – the spread – can be a handy barometer for what’s about to happen to WTI prices.

You see, the long-term average spread between Brent and WTI is just $0.87.

Just take a look at this surge… 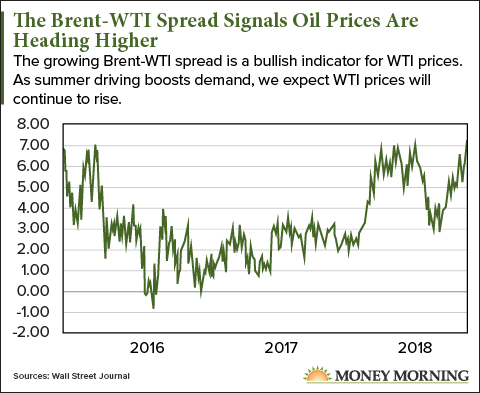 That’s a sign WTI prices will continue to rise even higher. And it’s creating a potentially lucrative profit play for savvy investors, especially as the summer driving season creates even more demand for WTI in the United States.

The spread will eventually revert toward its average, either because Brent crude prices will fall or because WTI prices will rise.

And we have every reason to think WTI prices will rise.

The summer travel season kicks off this Memorial Day weekend, which will create more demand for refined oil. Plus international catalysts will continue to boost oil prices. The United States’ departure from the Iranian nuclear deal will lead to new sanctions on their oil. Venezuela’s oil production is collapsing. And finally, American oil producers are only cautiously increasing output.

That means if the Brent-WTI spread closes thanks to higher oil prices, you can turn it into a triple-digit profit.

The simplest way to play this spread is to buy the United States Oil Fund LP (NYSE Arca: USO). This exchange-traded fund tracks the price movement of WTI, so when prices rise, USO will, too.

But you could potentially double your money on USO using an options strategy.

If you’re willing to accept more risk, you can buy a $16 call on USO with an August 17 expiration date. That option currently trades for $0.25 a share, or $25 per contract (which equals 100 shares).

Of course, when to sell the option is up to you, but I would take the double as soon as it hits to lock in the profit.

That’s just one way to use options contracts to bank big paydays, but we can show you how to do it every week…

This Easy-to-Follow Blueprint Could Make You $15,000 Richer

America’s #1 Trader used to be an average Joe scraping to get by. He never graduated from college, and he spent most of his career as a Home Depot customer service rep.

He didn’t want to be stuck at a job he didn’t like until he was 80 – so he taught himself how to trade. He found he had a knack for it, and he became richer than he ever thought possible.

Then he invented his patent-pending Money Calendar, and he knew it could change people’s lives.

Now, for the first time ever, he’s revealing all his trading secrets and strategies – so you can amass a fast fortune for yourself.

There’s no guesswork involved, and the best part is – it’ll only take you 10 minutes per day! Click here now to start this once-in-a-lifetime journey…