The purpose of this article is to show why Malaysia has a good chance of being a good investment opportunity now that the recent elections have put old-time leader Prime Minister Mahathir Mohamad back in power.

Prime Minister Mahathir Mohamad is a veteran leader and guided Malaysia through the Asian Tiger meltdown in the 1990s. He did this by imposing strict capital controls that restrained the capital flight that so badly damaged the other Asian Tiger nations. He defended his economy against currency speculators, the hunter became the hunted.

Already the new prime minister has scrapped the Goods and Services Tax [GST] which was introduced in 2015. Bond markets are already complaining about the decision. What is bad for bond markets is normally good for stocks and the population. Larger deficits are already on the agenda and could be an $11 billion boost to the economy.

Removing the tax also does away with the administration impost on industry and most important of small business who do not have the depth to deal with the additional paperwork. This admin burden is gone and also more money is left in the economy in order for it to grow. A double win.

Other policies of the new government include lifting the minimum wage and and adding fuel subsidies back. Both of these moves put money back in the hands of consumers.

If you lift one the other follows.

The previous incumbent, Najib Razak, sank the economy by draining it of cash with surplus inspired national government budgets making himself so unpopular in the process that he was voted out. This is a good thing as you cannot grow an economy by draining money out of it. The chart below shows the damage to GDP that Najib Razak did.

A balance of sectoral flows model was used after the work of British economist Professor Wynne Godley to carry out the assessment of the change of management.

In 1970, Professor Wynne Godley moved to Cambridge, where, with Francis Cripps, he founded the Cambridge Economic Policy Group (CEPG). In early 1974 (after playing around with concepts devised in conversation with Nicky Kaldor and Robert Neild), Wynne Godley first apprehended the strategic importance of the accounting identity which says that, measured at current prices, the government’s budget balance, less the current account balance, is equal, by definition, to the private sector balance.

As a percentage of GDP, all three sectors sum to zero.

A nation’s balance of accounts can be expressed by the following formula:

The community, business, and the stock market are located in P.

For P to expand, it needs the balance of inputs from G and X to be positive. A negative balance causes P to contract.

When one adds all three sectors together, it equals the GDP for that year. One sector’s loss is the other’s gain, and if they all go down, so does GDP.

When one makes a sectoral analysis of Japan, one finds the following:

The charts below show the key information required to calculate the sectoral balances.

Recent, current and projected annual sector balances are shown in the table below:

(Source: Trading Economics, FRED and Author calculations based on same)

#Forecast based on existing flow rates and plans.

As the new Prime Minister institutes his plans they could add 4% of GDP to the headline number. This raises the private sector balance to 8% of GDP. This is a strong result and a big change and will move markets forwards.

The private sector balance is also reinforced by private credit creation from private banks. One can say that aggregate demand in any period is GDP + Credit. The chart below shows the private credit trend.

Private credit creation adds about 2% of GDP to the economy and money supply each year.

The flow of credit adds to the stock of private debt shown in the chart below. 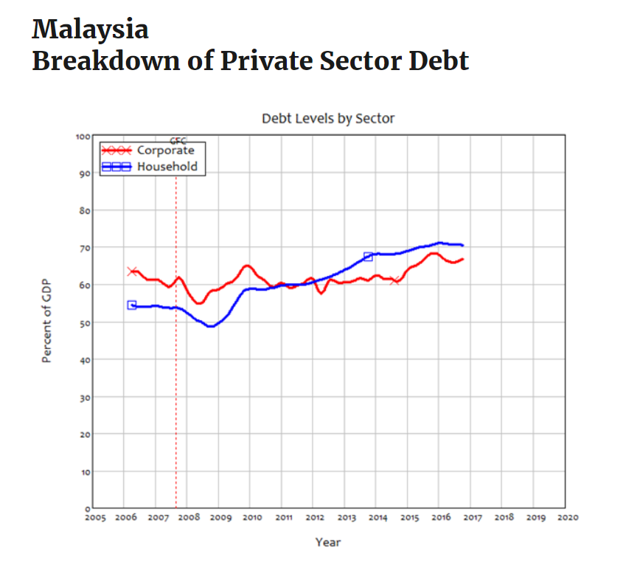 Private debt is 135% of GDP which is quite high. Government spending, which is income for the private sector, is needed to help lower this high debt level.

So What Can Happen Now With a Change of Managment?

The abolition of GST alone adds $11B to the economy and lifts GDP by 4%. The other plans to lift the minimum wage and provide fuel subsidies will add further to this GDP boost. For the moment only the $11B will be modeled.

One would have smoother markets and steadier growth if taxation were abandoned in a modern money economy. Government bond issuance is also unnecessary and stopping this practice would stop rating agencies being able to influence national governments with the threat of a rating down grade if they are not austere enough.

To illustrate the point, imagine that the national government declared the present unit of account null and void and introduced a new unit of account called the Ringerroo.

It could not tax in Ringeroos as none have been issued by the Treasury to the population that uses the unit of account. Nor can the national government borrow any as none exist to borrow.

It is clear that a government must first create and spend its currency before it can collect it. But why collect it if one can create it as needed?

Taking the analogy further, one could not go to a bank and borrow Ringeroos because banks do not yet have a capital base of Ringeroos from which to create credit Ringeroos. Banks must first have a capital base as a condition of their government-issued banking license before generating loans. Loans create deposits and generate reserves at the national bank. Banks are capital constrained and not reserve constrained. No capital = no loan creation.

One can see then that the private sector has a strongly positive private sector balance of over 8% of GDP. This is one of the strongest in the world, resulting from the changes already introduced by the new Prime Minister.

At some stage, the national government will stop taxation after it realizes that it now operates a modern money system and has all the money it needs courtesy of its currency creation powers at the national treasury. How many decades must pass before this lesson is learned is unknown. Currency creation is a sovereign privilege that few understand.

Due to the management change and progressive policies that increase the private sector flow balance, Malaysia is recommended as a buy.

There is scope for financial assets such as stocks, bonds, and real estate to rise given that the private sector is receiving a positive inflow of funds. Investors wishing exposure to the Malaysian stock market can make use of the iShares MSCI Malaysia ETF (EWM).

Disclosure: I am/we are long EWM.