As a result of Cerner Corporation’s (NASDAQ:CERN) weak first-quarter results, the company lowered its full-year 2018 outlook. The healthcare technology provider even projected that its second-quarter adjusted earnings could drop from the prior-year period. 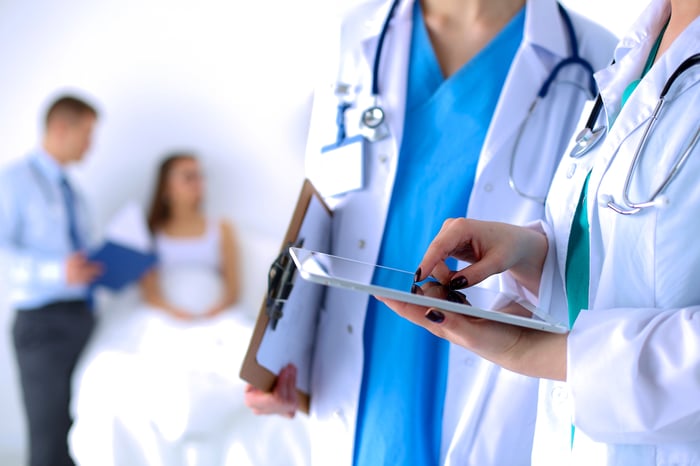 What happened with Cerner this quarter?

In May, Cerner projected that its second-quarter revenue would fall between $1.31 billion and $1.36 billion. The company beat the upper end of that range thanks to solid growth in several areas. Professional services helped the most, with revenue jumping nearly 13% year over year, to $447.3 million.

Cerner also reported solid increases for managed services, with revenue of $285.6 million, up 9% from the prior-year period. Support and maintenance revenue grew by 7.5% year over year, to nearly $279 million. Licensed software sales also jumped by a healthy amount, rising 10.6%, to $172.4 million. One negative for Cerner in the second quarter came from its subscriptions revenue, which dropped 32%, to $82.9 million.

What about the decline in GAAP net income? The biggest culpritwasa significant increase in spending on sales and client service to the tune of $71.7 million. Cerner also spent $25.4 million more on software development than it did in the prior-year period.

However, the company beat the upper endof the rangeof its second-quarter earnings projection by $0.01. This better-than-expected performance stemmed primarily from adjusting for higher share-based compensation expense and a lower impact from pre-tax adjustments.

I am pleased with our second-quarter results, which included all key metrics being at or above expected levels. Our results were solid across all of our major solution and services categories and included good contributions from U.S. and non-U.S. regions. Looking ahead, we believe our solutions and tech-enabled services are well aligned with the challenges providers and other healthcare stakeholders are facing, and we have a significant opportunity to grow as we help them with their transition to value-based care in coming years.

One other thing for investors to look forward to that could impact Cerner is a potential acquisition of one of its smaller rivals, athenahealth. After the departure of founder and former CEO Jonathan Bush in June, athenahealth’s board of directors stated that they were exploring strategic alternatives, including a potential sale or merger.