Heading into its fourth-quarter earnings report, investors had modest expectations for Cedar Fair’s (NYSE:FUN) business. The regional theme park operator stumbled during the peak summer months, which raised the prospect of declining attendance in 2018 following several years of record results.

In its announcement this week, the company revealed that a strong showing for its fall and winter celebrations helped avoid that fate and allowed Cedar Fair to reach its (reduced) profit ambitions for the year. The latest results also point to some encouraging developments that might make the business less susceptible to the types of volatile swings that hurt shareholders in the past year. 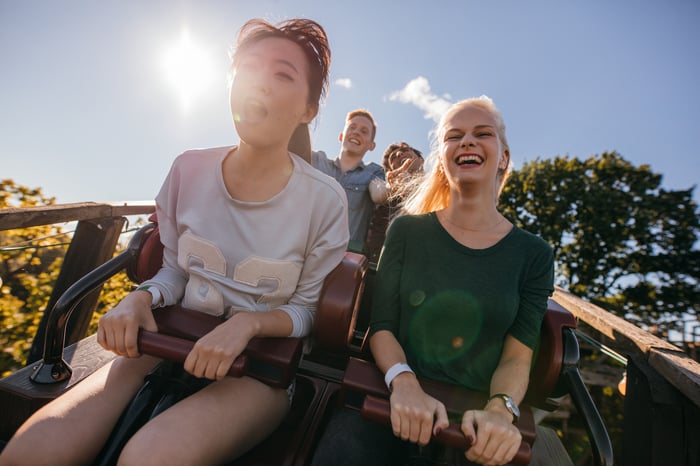 Most of the important operating metrics moved in the right direction this quarter. Cedar Fair’s Halloween and WinterFest events drove a 9% revenue increase that was powered by higher attendance, executives said. This success allowed overall attendance to increase 1% for the full year, with guest counts rising to 25.9 million.

Cedar Fair notched higher in-park spending as guests shelled out nearly $48 per visit on food, games, merchandise, parking, and ancillary attractions like water parks. The company paired that gain with higher out-of-park revenue as its hotels enjoyed rising occupancy rates. Each of these wins contributed to a 2% uptick in overall sales for the year, to $1.35 billion.

It wasn’t all good news in the report, though. A big rebound in the fourth quarter failed to avert a broader profit decline as operating income fell to $291 million from $295 million in the prior-year period. CEO Richard Zimmerman and his team blamed “disruptive weather patterns” during the first half of the year that held back attendance during the key summer months. Those struggles meant that expenses like labor were higher than expected as a percentage of sales. Thus, adjusted earnings dropped to $468 million, or 35% of sales, from $479 million, or 36% of sales in 2017.

In their quarterly earnings conference call with investors, executives concentrated their comments on describing for investors how they plan to produce healthier profit gains and steadier revenue growth in the coming years. They are hoping to stabilize sales, for example, by widening the appeal of the company’s parks through new entertainment experiences and more events. As an early success story, management pointed to the 6 million annual guests that its Knott’s Berry Farm park now enjoys thanks to several routine seasonal events that are driving repeat visits and fueling higher season-pass sales.

Cedar Fair is also pushing these advance season-pass sales across its properties in a bid to lessen the impact of any particular weather slump. The company revealed quick progress on this score, saying commitments are up 25% for 2019 so far.

These shifts will ideally allow adjusted earnings to quickly return to growth and march to as high as $575 million by 2023, executives said. That number translates into compound annual gains of about 4%, which is exactly the rate at which management aims to raise its dividend payout each year. Cedar Fair’s current distribution yields over 7% today, which makes it an attractive option for income investors who believe the company’s strategic initiatives will produce a stronger, more stable theme park business over time.