This is a good time to be in the cruise business, especially if you’re the industry’s dominant player. Back in late March,Carnival(NYSE:CCL)announced its best sales growth performance since 2011 as customers packed its fleet and made heavy use of optional onboard amenities like spas and premium dining.

Given the strong booking trends that Carnival announced at the time, there’s every reason to expect another healthy sales growth showing when management reveals updated earnings results on June 25. But investors will be watching more than just top-line revenue in this upcoming report. 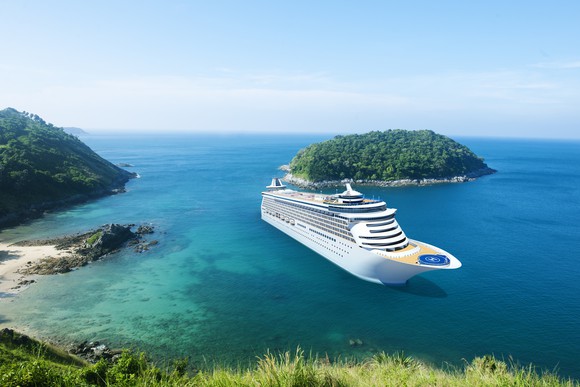 Carnival beat expectations last quarter, with net revenue yields, its core growth metric, improving by 4%. Management had forecast back in December that gains would be closer to 2%, and so the actual performance was a positive surprise for shareholders. Carnival benefited from both a healthy uptick in ticket prices and from increased spending by customers after they boarded the ships.

Investors will want to see progress with both of these categories this week, but perhaps not by as much as in the most recent quarter. CEO Arnold Donald and his team predicted back in March that net revenue yield growth would land somewhere between 2.5% and 3.5% in the second quarter, in fact. They had positive things to say about forecast demand, meanwhile, with fiscal 2018 booking volumes trending even with the prior year despite higher prices.

That favorable trend can shift quickly, though, and not just due to a drop in the popularity of cruise vacations. Overcapacity in the industry can hurt Carnival’s business, too, and that’s why it’s important that the company, and its rivals, carefully balance fleet size against projected demand. Modest revenue yield growth, on the other hand, would show that capacity is expanding at the right pace.

Costs on the rise

Shareholders should brace for a slight worsening of Carnival’s core profit performance. Last quarter’s spike, after all, had a lot to do with the timing of expenses, and so costs are projected to rise by between 4% and 5% this quarter compared to a 1% uptick in the prior quarter.

The longer-term forecast is what matters, and that’s looking good these days. Carnival is expecting costs to rise at just about 1% for the full fiscal year even as revenue yields improve by 2.5%.

The gap between those two numbers forms the basis for many of the company’s aggressive financial goals, including achieving a double-digit return on invested capital in fiscal 2018.

As for risks going forward, Carnival will likely comment on rising fuel prices this week and how that volatility might impact reported earnings. The hurricane season is approaching, too, and dangerous weather patterns always threaten to disrupt the business, given that the Caribbean is the preferred destination for about one-third of Carnival’s annual guest count.

Looking further out, the company has 18 ships set to deploy between 2018 and 2022. These new properties are larger, more fuel efficient, and incorporate the company’s latest thinking on delivering the best cruise vacation experience possible. Assuming demand keeps rising as it has over the last few years, the increased capacity should support rising passenger volumes even as prices march higher.