As the tech sector takes a header, the key question for stock-market bulls revolves around how much its leadership really matters for the broader market.

See: Tech stocks face a dumpster firebut heres how that could be bullish


In the short term, it will be difficult for the broader market to ignore the selloff in tech, said Michael Arone, chief investment strategist at State Street Global Advisors, with $2.8 trillion in assets under management. Longer term, however, he expects stocks to continue to perform well.

Its been a very growth-driven, momentum-driven market. If you now see that the leaders in the growth and momentum part of the market are selling off, it will be a challenge, he said, in a phone interview.

Among those growth and momentum shares, the so-called FAANG stocks, an acronym referring to Facebook, Amazon.com Inc.
AMZN, -4.38%
Apple Inc.
AAPL, -1.10%
Netflix Inc.
NFLX, -4.96%
and Google parent Alphabet Inc.
GOOG, -0.05%
had been leading the way upand now are making big moves to the downside. Through Tuesday, the S&P 500 tech sector saw its market capitalization shrink to $5.5 trillion from its peak of around $6 trillion on March 12, according to WSJ Market Data Group.


See: Tech sector forfeits half a trillion dollars in value over 2-week span

Indeed, since the beginning of 2017, information technology shares have outstripped those in other sectors by around 20%, said Oliver Jones, economist at Capital Economics, in a Wednesday note. Since mid-March, however, theyve fared worse around the world (see chart below). 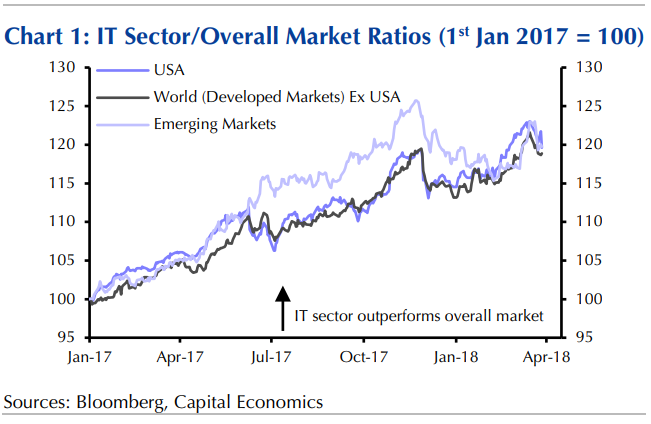 Tech was leading the way up when the market was doing great. Its not surprising to see it do worse as youre getting more volatility, just in sort of a pullback sense, said Aaron Anderson, senior vice president for research at Fisher Investments.

Meanwhile, investors should remain mindful that it is rarely healthy for so few assets (5-8 technology stocks in the past 18 months, for instance) to exhibit such concentrated strength and overly consensus bullishness, said Brian Belski, chief investment strategist at BMO Capital Markets, in a note last week.


Anderson expects tech to eventually regain its leadership role, and argued that strong economic fundamentals should allow stocks overall to continue to do well in the interim.

Tech stocks suffered periodic bouts of underperformance last year, including a sharp but short-lived rotation out of tech into other sectors late last year and a swoon toward midyear that did nothing to derail the 2017 rally.

BMOs Belski also looks for solid market gains this year, which he noted implies the same for technology. In his note, he said techs absolute performance might be more relevant to overall market performance, despite the conventional wisdom that the tech sector needs to lead in order for the market to grind higher.


Belski found that when technology performance remains positive, which he expects for 2018, there is essentially no difference in market returns whether the sector is leading or lagging (see charts below).


Therefore, we do not believe investors should be extrapolating recent technology weakness to the broader marketparticularly given its strong run over the past several years, he said.

Tesla is just months away from a total collapse, says hedge-fund manager