California’s Energy Commission has officially made solar mandatory for new homes built after 2020. This gives the solar industry a new guaranteed market of about 222 megawatts (MW) per year, according to GTM Research (now Wood Mackenzie, a subsidiary of Verisk Analytics). In other words, California’s new home construction alone could account for about 10% of all of the residential solar installed in the U.S., based on 2017 installation levels.

Recent updates to GTM Research’s projections show an incremental benefit for the residential solar industry of about 650 MW between 2020 and 2023, which could be worth $2 billion for the industry. That should be great for the fortunes of solar companies with exposure to the state. 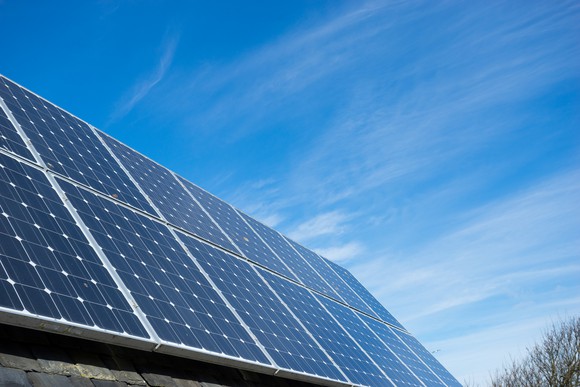 Why this mandate is a big deal

New homes were always more likely to have solar than old homes in California, but only about 20% of new homes actually had solar installed. With 75,000 to 100,000 new homes being built each year, there could be as much as 400 MW of incremental demand growth, assuming an average solar system size of 5 kW.

GTM Research takes a slightly more conservative approach and only estimates 222 MW of total new-build solar in California in 2020, with 900 MW total installed between 2020 and 2023. But 650 MW will be incremental new demand from this law, which at an average cost of $3 per watt would be worth $1.95 billion to the solar industry.

Expanding the pool for everyone

Sunrun (NASDAQ:RUN), Vivint Solar (NYSE:VSLR), and Tesla (NASDAQ:TSLA) are the three biggest solar installers in the U.S., and they’re likely to see an incremental boost in demand. Expanding the pool in any way is good news because residential solar installations were down 16% in 2017, and it’s getting harder to find new solar customers. Tesla has taken the brunt of the decline, shrinking installations in the first quarter of 2018 by 49% versus a year ago. Sunrun’s installations fell 7% to 68 MW, and Vivint Solar’s dropped 12% to 40.4 MW. All installers would love a new source of consistent demand.

One product that will be interesting to watch is Tesla’s solar roof, which makes a lot of sense on new homes (rather than in retrofits of old homes). New roofs could be designed to incorporate the solar roof, maximizing the number of active solar tiles and improving energy production. This would also give Tesla a consistent source of demand.

The king of new-construction solar energy

It’s easy to see how the winners from a residential solar mandate would be the biggest residential solar installers in the country. But it’s SunPower (NASDAQ:SPWR) that has a leg up in solar for new construction. The company has partnered with 13 of the top 16 homebuilders in California, and its premium solar panels fit well with the same target market as buyers of newly constructed homes, who are more likely to have disposable income for a premium product.

According to SunPower, it has installed solar on over 30,000 new homes in over 1,000 communities since 2005. It may be a surprising choice, but if I had to choose one winner in California’s new-home solar boom, SunPower would be it. Still, given the decline in installations recently, all solar installers will take a guaranteed source of demand.