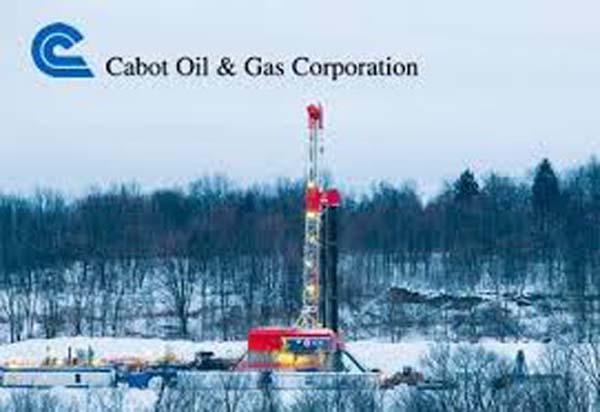 Cabot oil & gas (COG) is a large-cap natural gas company with a market cap of $10.51 Billion. The company primarily focuses on the Marcellus Shale with approximately 180K net acres in the dry gas window of the play located in Susquehanna County, Pennsylvania.

What differentiates Cabot Oil & Gas in this commodity energy segment?

Cabot oil is primarily a US gas producer, and therefore the price of natural gas is particularly crucial for the company. Cabot natural gas revenue segment is 87.1% of its total revenues. 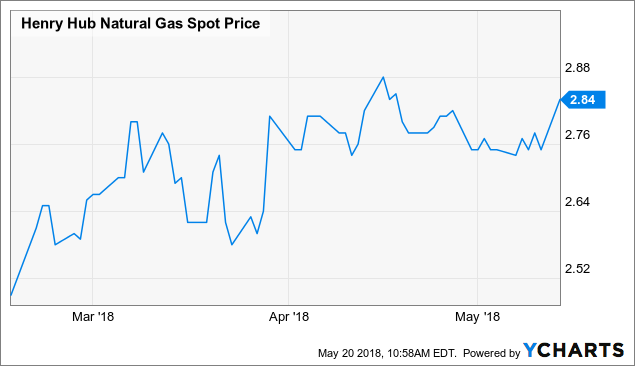 Trends in US natural gas production

According to Market Realist, The United States has been the world’s top producer of natural gas since 2009, when its production surpassed Russia’s, with growth increasingly coming from Appalachia, especially the Marcellus and Utica shales, in recent years.

Bearing these above comments in mind a long-term investment in this segment through Cabot Oil and Gas makes perfect sense. I recommend a buy on the stock at $23.

Cabot Oil & Gas Corp. is an independent oil and gas company that develops, exploits, explores for, produces, and markets natural gas, oil, and natural gas liquids in the United States. 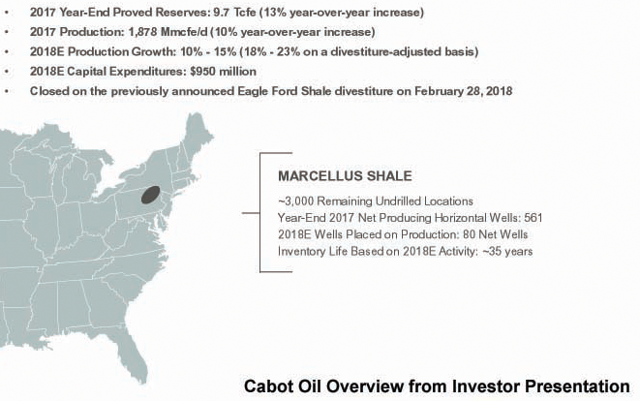 Source: Most of the data indicated above come from Morningstar and company filings.

The company is generating free cash flow totaling $190 million on a yearly basis according to Morningstar.

The difference between the FCF from the company and the FCF Morningstar is that the latter is not using the “Investment in equity method investments,” “change in assets and liabilities” and others of ~$28 million this quarter which is deducted by the company to obtain the free cash flow. Morningstar uses a primary Operating cash flow minus CapEx.

The company increased dividends to $0.24 annually, which means a payout of $111 million.

Cabot oil & gas operates in the Marcellus shale now exclusively. During the second quarter of 2017, Cabot averaged 1,884 Mmcf/d of net Marcellus production which exceeded the high end of the company guidance range and represented a sequential increase from the fourth quarter despite the loss of volumes associated with the closing of the Eagle Ford Shale divestiture at the end of February.

Details between Oil, Natural Gas and NGL for 1Q’18

During the first-quarter of 2018, the Company averaged 1,822 million cubic feet (Mmcf) per day of net Marcellus production, an increase of 3% sequentially compared to the fourth-quarter of 2017 despite the Company not placing any wells on production during the quarter.

During the second-quarter of 2018, the Company plans to place 20.0 net wells on production, of which 16.0 net wells have already been turned to sales. Cabot expects to put an additional 60.0 net wells on production during the second half of the year to allow for the anticipated increase in production volumes associated with the in-service of new infrastructure projects beginning in June. Cabot is currently operating three rigs and two completion crews in the Marcellus Shale.

Net Debt is about $0.56 billion, and net debt-to-EBITDA is 1.57 which is a good ratio which means it will take less than two years to repay the debt using EBITDA. This ratio is likely to get even better in 2018.

The Company’s net debt to adjusted capitalization ratio and net debt to trailing twelve months EBITDAX ratio were 18.8% and 0.5x, respectively, compared to 29.2% and 1.0x as of December 31, 2017.

We can recognize quickly that the company has a healthy debt situation. One comment in the conference call, about liquidity.

We continue to maintain over $500 million of cash on hand and have approximately $1.7 billion of available commitments under our credit facility.

On a Marcellus standalone basis, we saw a 4% reduction in cash cost relative to the prior year comparable quarter, and we anticipate further improvements in our cost structure, driven by economies of scale, resulting from our planned increase in operating activity and production over the coming years.

An essential element when it comes to a gas producer like Cabot is the All-in operating expenses and the level of cash operating expenses in $/Mcfe. According to the graph below from the company, it is $1.55 and $1.06 per Mcfe in the first quarter 2018, which leaves a very nice profit margin. 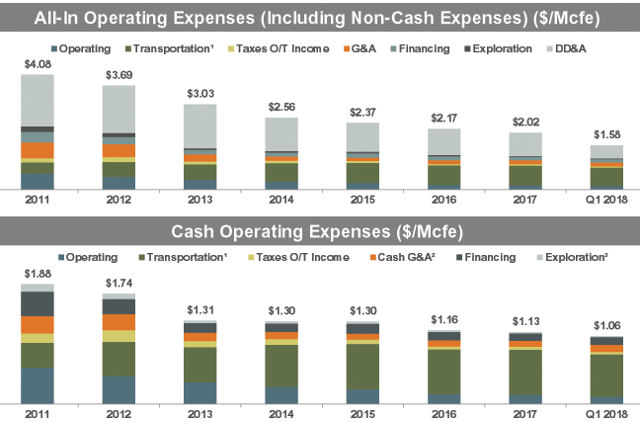 EIA expects Henry Hub natural gas spot prices to average $3.01/million British thermal units (MMBtu) in 2018 and $3.11/MMBtu in 2019. NYMEX futures and options contract values for August 2018 delivery that traded during the five-day period ending May 3, 2018, suggest that a range of $2.32/MMBtu to $3.40/MMBtu encompasses the market expectation for August 2018 Henry Hub natural gas prices at the 95% confidence level.

Note: First-quarter 2018 natural gas price realizations, including the impact of derivatives, were $2.44 per thousand cubic feet (Mcf), a decrease of 8% compared to the prior-year period. Excluding the effect of derivatives, first-quarter 2018 natural gas price realizations were $2.50 per Mcf, representing a $0.50 discount to NYMEX settlement prices compared to a $0.67 cut in the prior-year comparable quarter.

However, with a generally moderate May weather in the US equating to a lack of significant heating or cooling demand, natural gas spot prices are trending lower so far in May to $2.70/MMBtu rising to $2.84 now, which suggests a price of $2.30~ for COG in the Q2’18.

COG presents an exciting trading pattern, as we speak, and it provides an excellent opportunity to accumulate a great US gas play safely. We can see that COG has reached strong support at $23+ (Strong buy accumulation) with a line resistance at $24.25 (partial sell flag) assuming a descending triangle pattern using Dec. 2017 and March 2018.

Assuming the pattern is confirmed we are close to the apex and a possible breakout that could push the stock either to $27 or $31 (sell flag).

On the negative side, COG could weaken further and cross support with high volume. In this case, support is $20 (Double bottom – buy flag).

A midterm rising channel pattern is visible as well with resistance at about $31 (Sell flag).

Author’s note: Do not forget to follow me on the oil sector. Thank you for your support, I appreciate it. If you find value in this article and would like to encourage such continued efforts, please click the “Like” button below as a vote of support. Thanks!

Disclosure: I/we have no positions in any stocks mentioned, but may initiate a long position in COG over the next 72 hours.